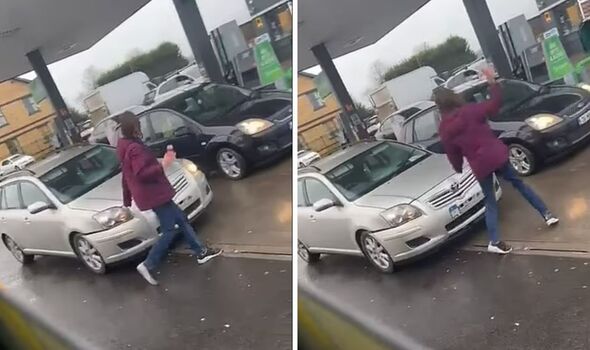 The moment a woman drove her car into the back of a parked car in a moment of extreme road rage has been caught on camera. The furious woman, driving a silver Toyota, rammed into the back of a a parked Ford at the Applegreen petrol station in Duleek, County Meath, on Tuesday morning at around 9.40am. The woman then got out of her car to scream abuse at the other driver before throwing a can of fizzy drink at her windscreen.

The can appeared to cause no additional damage and the aggressor angrily stomped back to her car.

At the start of the video, the woman initially rams into the back of the black Ford, while the victim is sat inside screaming as the ordeal takes place.

The woman then gets back inside her car and begins reversing it – giving off the appearance that she plans to drive into the back of the other vehicle one more time.

But, with its number plate hanging off, she instead parks her car next to the victim’s car.

The perpetrator, wearing a purple raincoat, then gets out of her vehicle while screaming abuse at the female driver.

She then throws a can at the Ford, while the woman looks on in horror as she sits inside her car.

She can be heard screaming: “I hope you still have the Gardaí on your phone. You f***ing horrible b***h.”

The woman then leans down to the victim’s car window and shouts again: “You horrible b***h”.

The victim, who remained inside her car throughout the scary ordeal, can be seen calling someone on the phone as the other woman screamed at her.

The woman then goes back to her own car before the footage cuts out.

It is not clear what started the incident, and when the footage was filmed.

An Applegreen spokesman told MailOnline: “This incident is a matter for the Gardaí, and as such, we cannot make any further comment.”

The Gardai said in a statement: “Gardaí are investigating a two-vehicle road traffic collision that occurred at a commercial premises on the R152 near Duleek, Co. Meath at approximately 9:40am on Tuesday 10th January 2023. No injuries were reported. Enquiries are ongoing.”