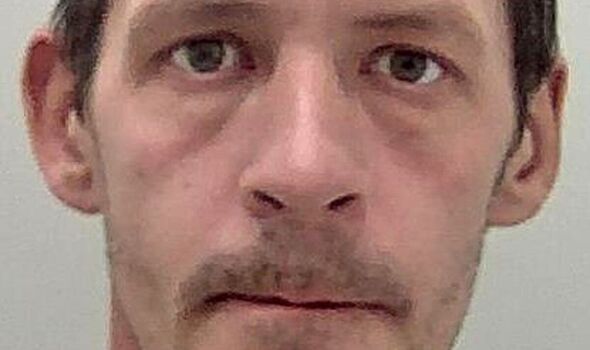 Mark Brown, 41, was sentenced to two life terms in prison for the brutal murder of Leah Ware and Alexandra Morgan in 2021. The self-described “psychopath with a conscience” refused to attend Hove Crown Court but was sentenced anyway after being found guilty of murdering the two escorts six months apart at a remote farm near St Leonards in East Sussex after meeting them through a sex work website.

The body of 33-year-old Ms Ware has never been found, but the prosecution believes he used a similar method – as well as also killing her Pomeranian dog, Lady.

Brown met Ms Ware in 2018 when he hired her as an escort and they developed an “on again, off again” relationship.

During the trial the court heard that Brown killed Ms Ware after tensions grew when she pressed him to leave his partner of 14 years.

But Ms Ware’s body has never been found.

Brown later hired Ms Moran for sex around a dozen times before offering her an escorting job worth £100,000 but when she visited the farm he killed her.

He claimed she died in an accident after hitting her head when she slipped in his workshop, saying he burnt her body “in panic”

Brown told the jury he and Ms Ware broke up in early 2021 and, as far as he knows, she is still alive.

Detective Chief Inspector Andy Wolstenholme, of Sussex Police, said the force would speak to Brown as soon as possible after the verdict to try to persuade him to say what happened to Ms Ware’s remains.

In the six months between killing Ms Ware and Ms Morgan, Brown messaged a friend, calling himself a “psychopath with a conscience” and saying: “I’m going to be very careful how I word this – it happened again, not very long ago when disposing of something.

“It’s a very unpleasant thing to do – an old oil drum, five litres of diesel, and hey presto, there’s not very much left.

“It gets hot, very hot, it glows almost white.

“The things I have done weigh heavily on my heart, on my head and my soul. A psychopath with a conscience – it’s a joke really.”