Home » Europe » Residents of Wennington fight back after wildfire tragedy

Residents of Wennington fight back after wildfire tragedy 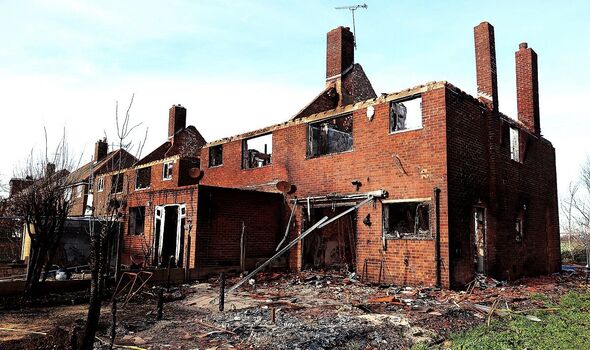 The devastating inferno and the 250-yard trail of destruction it left behind was featured on TV news ­bulletins around the world. The houses, which look as if they were bombarded by artillery, still line the single road through the ancient hamlet in Havering, Essex.

Here and there burnt-out cars and vans show where they were on the afternoon of Tuesday, July 19, the hottest day ever recorded in the UK.

The fire is believed to have started in a smouldering compost heap, just yards from the village fire station.

Had their single fire engine not been six miles away fighting one of the thousands of grass fires to blight the country during the tinder-dry summer, it could have been snuffed out.

Instead, it blazed across parched grassland, engulfed houses, and spread at a pace “faster than a man can run” according to witnesses.

Residents are struggling to come to terms with the aftermath.

Some are in dispute with their insurers. Others have been made ­permanently homeless.

But amid the wreckage, there is an uplifting tale of community spirit and cooperation.

Marine Cottages, a row of two-up, two-downs built for laundry workers in 1886, was hit by the inferno.

Nine of 10 dwellings in the terrace were destroyed but the first in the row, once the village post office, was almost entirely untouched.

Homeowners Dave and Roberta Biles, 69, have been the sole ­residents while a demolition team flattened the burnt-out shells next door. Architectural pieces are being salvaged so the terrace can be rebuilt.

Retired construction boss Dave, 68, said: “It was a miracle that our house didn’t go up with the rest.

“We have suffered damage to the roof and the flames burned up our garden fence to within a few feet of the conservatory.

“The heat was so intense it warped it but it didn’t catch fire.”

Dave spent seven years building a Spanish villa complex in his back garden complete with swimming pool, pool house, bar, and even a palm tree, still blackened with soot from the blaze.

He added: “We think it was the wind direction that just saved us but we’re not sure. The fact that we had no grass in the garden might have saved the house but who knows?”

“The owners of the cottages have been very down. As the only residents we keep sending them updates to keep their spirits up.

“The good news is the insurers are all working together through a single claim adjuster.

“The rebuilt row of cottages will look exactly like the originals but have insulation, underfloor heating, fantastic kitchens and bathrooms.

“We will get there, we have to look forward but there are things we want to fix.

“First is to protect all houses in the village with ­effective firebreaks between us and the grassland and meadows that surround us. Other countries do it as a matter of cours. We’ve got to make sure this doesn’t happen again.”

The Biles’ neighbour Sandra Tubb, 74, rented No 9 Marine Cottages for 48 years, spending her married life and raising her son in the property.

Her beloved husband’s ashes were buried in the garden.

The cottage has been demolished but Sandra as a tenant paying rent will have no right to return to the home she lived in for almost half a century.

She hopes the council will find her accommodation elsewhere but did not want to comment on how that process is going.

Local councillor Sue Osprea, 61, said: “What is desperately needed is appropriate housing for the people who have lost everything.

“There is also a young family with two children who were renting in Marine Cottages.

“When that row is rebuilt they will not have any right to move back in, they are homeless through no fault of their own.

“They have been moved by the council into a homeless hostel, an environment unsuitable and possibly dangerous for young children.

“We desperately need a two or three-bedroom house but the council tell us there are none available. It is appalling.”

Locals believe the fire has changed the nature of the village, which appears in the Domesday Book and was reported as having a population of eight souls in 1066.

She added: “It seems it will take at least two years, probably more, to rebuild the houses that were lost.

“People are trying to find ­positives but it has been a really emotional experience and has changed the community.

“The village is different. I know some people have lost everything. Some of them still cry every day about what has happened.

“It will be a slow journey, it will take time but there are some positives. People are asking how we can improve things for the community.

“We have issues with traffic through the village and a local landfill site.

“People have become quite determined to take these on and get something done about them.

“It will take time but people are quietly determined Wennington will emerge from this as a better place to live than it was before this terrible fire.”