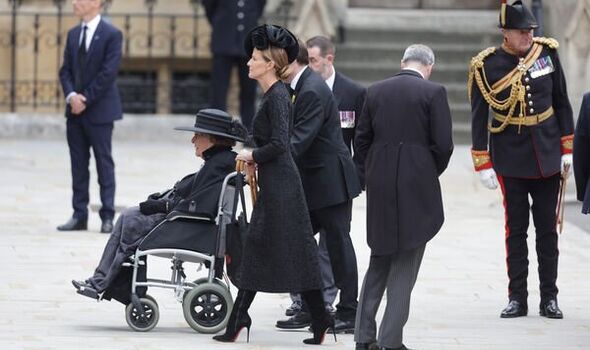 Pamela, the daughter of Earl Mountbatten, was present when Prince Philip was given the news at the Treetops game reserve in Kenya that King George VI had died.

She later recalled: “He walked into the sitting room and asked his wife to come with him into the garden. I watched them on the lawn as they walked together, slowly, up and down, up and down.”

“When they returned, I instinctively gave her a hug. But then quickly, realising she was now the Queen, dropped into a deep curtsy.”

The days of friendship had turned into something else.

Pamela, and the ladies-in-waiting who succeeded her during the Queen’s 70-year reign, together with a small group of other intimates, formed a close-knit circle around their monarch – friends, of course, but also her servants and protectors.

For them, today’s farewell will have a special significance because their days of usefulness to the Crown are almost done.

The new King has no need of their services and the Queen Consort will be allowed to choose her own small circle of attendants.

But while they lasted, they occupied a very special place in palace life.

They were organised into a strict hierarchy, with medieval titles – such as Lady of the Bedchamber, Woman of the Bedchamber and Mistress of the Robes – had clearly defined tasks and worked for the Queen in strict rotation at home and abroad.

It was their job to collect the bouquets, make the introductions, smooth the path – and make sure there was a loo.

Most important when attending the Queen at public functions they must read her secret signals – the shift of a handbag from one wrist to the other, or the twirl of a ring, for example, was a specific code worked out between the boss and her helpers. Their job, at all times, was to remain in the background but be everwatchful and protective.

By the end there were some dozen or so ladies-in-waiting attending the Queen, some of whom had been with her almost since her 1953 Coronation.

Their sense of loss must be immense, on a par with family members, but during these days of changeover, they must continue to slog away, doing their very best to answer the thousands of letters of condolence which have flooded in since the monarch’s death.

Chief among their number until recently was the aptly-named Fortune, Duchess of Grafton – who as Mistress of the Robes, a title stretching back to Queen Elizabeth I – was boss of all the other ladies.

Fortune, daughter of a banker, died last December aged 101, but for her 100th birthday the Queen came to call in person at her home in Chelsea to deliver the traditional card which every centenarian – highborn or low – receives.

Closer still to the Queen was Lady Susan Hussey, 83, who was asked to be godmother to Prince William and called in to help assist the then Meghan Markle into the royal circle – which the Duchess of Sussex declined.

Among Lady Susan’s other tasks was to carry cash, just in case, and she was once spotted handing the Queen a pound coin so she could purchase a copy of The Big Issue.

There was also US-born Virginia, Countess of Airlie, now 89. Born in Newport, New Jersey, the daughter of a banker, she’s the only non-British attendant.

Her grandfather, banker Otto Kahn, was known as the King of New York. Her official title was Lady of the Bedchamber.

Lady Diana Farnham, 90, died in December but other ladies-in-waiting soldier on, including Dame Mary Morrison who is described as one of the Queen’s closest confidantes with 60 years’ service.

Lady Richenda Elton is the second wife of retired politician Lord Elton.The daughter of Sir Hugh Gurney, of the Quaker banking family, she is now in her 90s.

Jennifer Gordon Lennox is married to a former Royal Navy captain, Michael Gordon Lennox, who was a member of the Queen’s personal bodyguard in Scotland. Now 78, she’s one of the younger ladies.

Dame Annabel Whitehead, 79, was also one of the newer recruits, joining the monarch in 2002 having served as lady-in-waiting to her sister Princess Margaret for nearly 30 years. Daughter of the first Lord Inchyra, she is married to a former banker. 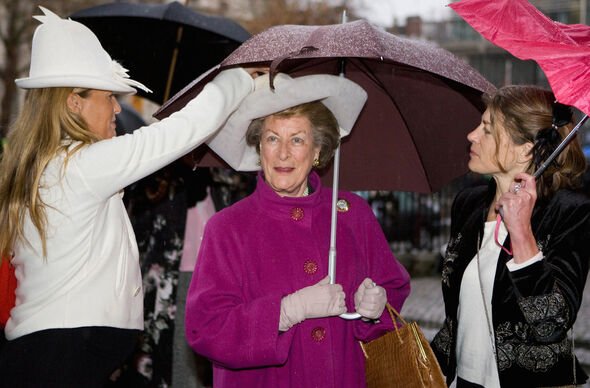 Philippa de Pass is a former lady-in-waiting to the Queen Mother. Her husband Robert was a close polo-playing friend of Prince Philip. Then there is the “extra” ladies-inwaiting – Lady Elizabeth Leeming, Susan Rhodes and Christian Adams.

In comparison to some of the Queen’s other ladies-in-waiting, Lady Elizabeth was a veritable fledgling after being appointed in 2017.

While Ms Rhodes was the lady chosen by the Queen to isolate with during Covid lockdowns and was seen on the balcony of the Foreign Office with the Queen during the last Remembrance Day service.

Each of the ladies-in-waiting will be given special seats for the funeral and looked after with extra care by royal servants.

Each will be offered the opportunity to enjoy a grace-and-favour residence as a reward for long years of service, though most won’t take up the offer, and their friendship will be rewarded with mementoes in the Queen’s will.

The reported rivalry between them could provide enough material for a TV sitcom but, recalled Esme, Countess of Cromer, in the end they all belonged to the same team – and were loyal to a fault.

She said: “We never talked [among ourselves] about the Queen and Prince Philip. We were all very discreet, always. There was no telling stories, ever.”

This inner circle of high-born aristocrats was occasionally breached by women from other backgrounds, notably Angela Kelly, daughter of a Liverpool dock worker who, though officially the Queen’s Dresser, was one of the closest people to the monarch.

Ms Kelly was responsible for the upturn in Her Majesty’s style after her arrival in 1994.

So close were the two that – alone among people in royal service – the Queen encouraged Angela to write two books detailing her Palace life.

In a world where there was only one man – Philip – the monarch valued her female friendships and first among them was Kelly’s predecessor, formidable Bobo MacDonald.

Ms MacDonald, the Scots-born daughter of a railway worker, was a nursery maid to Elizabeth before becoming the Queen’s dresser but, in effect, her gatekeeper.

She could also be quite blunt to the boss.

The monarch’s cousin Margaret Rhodes recalled: “Bobo could say anything to the Queen like ‘you look awful in that dress’, or ‘you can’t wear green’.”

One lady-in-waiting described her as “ferocious” and biographer Sally Bedell Smith said: “She was acknowledged to be the sovereign’s eyes and ears.”