King Felipe VI is the current monarch of Spain, having risen to the throne after his father Juan Carlos abdicated in 2014, both of whom are in attendance at Queen Elizabeth’s funeral service along with their respective spouses. Juan Carlos and the late Queen Elizabeth II were distantly related, as both former leaders were great-great-grandchildren of Queen Victoria.

Foreign royalty and leaders from around the world gathered on Monday to pay respects to the late Queen Elizabeth at her state funeral in what has been described as the biggest gathering of European royalty in years.

Two generations of Spanish royalty are in attendance: former monarch Juan Carlos who abdicated the throne in 2014 and King Felipe who took over from his father after the abdication.

The connection between the Spanish and British monarchies started with the marriage of Princess Victoria Eugenie of Battenberg and King Alfonso XIII in 1906.

Princess Victoria Eugenie, later known as Queen Ena of Spain, was the fifth daughter of Queen Victoria and Prince Albert. 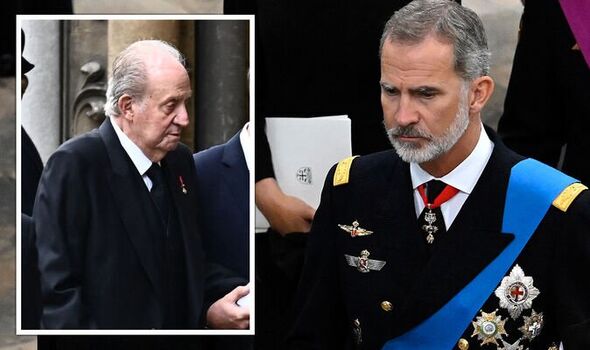 Felipe and the late Queen reportedly had a very friendly relationship, as he affectionately called her ‘Auntie Lilibet’ according to Euro News.

In 2017 Queen Elizabeth gifted King Felipe some sentimental copies of love letters between their common ancestors over a century ago as she welcomed the Spanish monarch to Buckingham Palace.

Speaking at an event in Seville earlier in the month, the King shared with his audience how difficult it was to express their “deep, personal, family and institutional feelings of loss at her absence and of immense respect for her”.

While Felipe and his wife Queen Letizia attends Queen Elizabeth’s funeral officially representing the Spanish delegation, former King Carlos could choose whether or not to attend in his own capacity as he received a private invitation.

The Evening Standard reported that Prime Minister Pedro Sanchez had requested that the former king not attend the state funeral of Queen Elizabeth.

This is also Carlos’ first public appearance in two years.

According to the Evening Standard, Carlos’ attendance has split Spanish opinions, as the left-wing political party, Podemos, described the former king as “a criminal on the run” while the conservative People Party deemed his attendance appropriate. 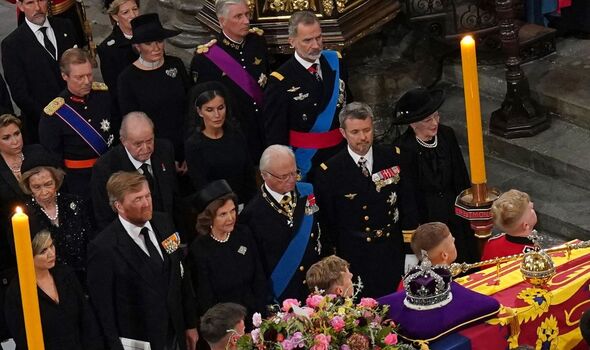 The 84-year-old was investigated by both Swiss and Spanish authorities following allegations that he was engaged in fraudulent activity, namely money laundering and tax evasion, during the later years of his reign.

According to The Mail Online, Carlos had also become embroiled in a controversial elephant hunting scandal regarding his son-in-law shortly before he abdicated.

Carlos was cleared of guilt in these investigations but the allegations alone established him as a controversial figure in Spain.

At the time of his abdication, a poll revealed that two-thirds of Spain wanted Carlos to step down, and the former king has since lived in self-imposed exile while his son, Felipe, took to the throne.