The day Britain came to a standstill for Queen’s funeral: Mourners pack pubs and people stop in the street to watch service on their phones as entire nation from care homes to airports comes together to witness historic final farewell

Britain ground to a halt as millions gathered together to watch the Queen’s funeral and bid her a final farewell in pubs, cares homes and airports.

Mourners even stopped in the street to watch on their phones as the solemn display of reverence was demonstrated across the nation.

Hundreds of thousands watched as the historic funeral was broadcast on large outdoor screens in various locations across the UK – from London’s Hyde Park to Coleraine Town Hall in Northern Ireland.

The congregation attending her funeral at Westminster Abbey, including King Charles, the Royal Family and 2,000 VIPs including emperors, kings and queens, prime ministers and presidents from around the world, bowed their heads during the silence.

Crowds along the Long Walk in Windsor and those gathered in public parks, city centres and Government buildings also fell silent.

The funeral, which was been dubbed the most-watched event in history, was viewed by an estimated 4.1billion people worldwide. 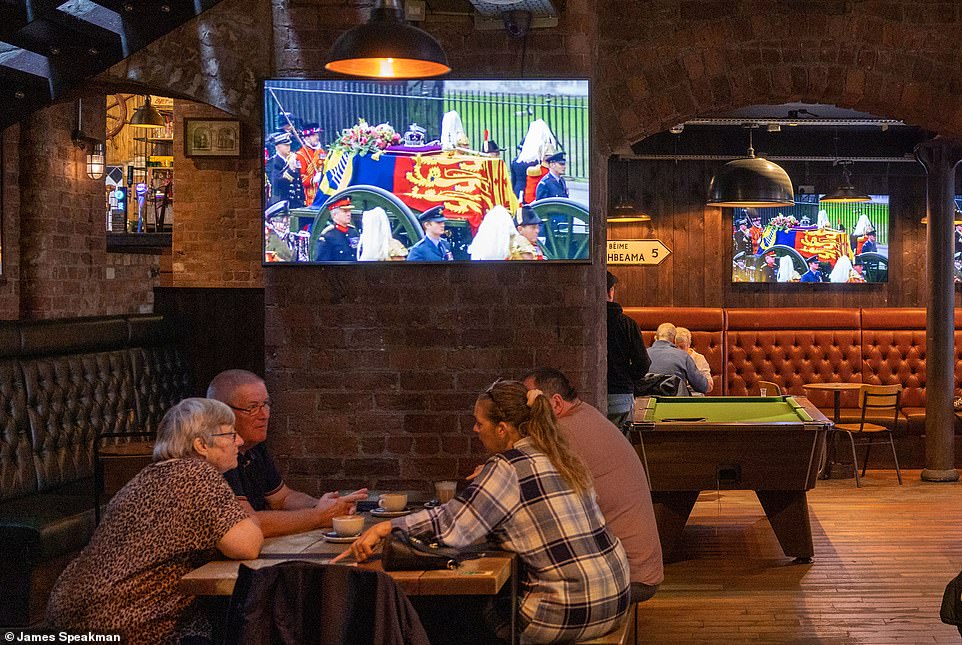 LIVERPOOL: The Queen’s funeral is broadcast on TVs at a pub in Liverpool as mourners pay their respects to Her Majesty 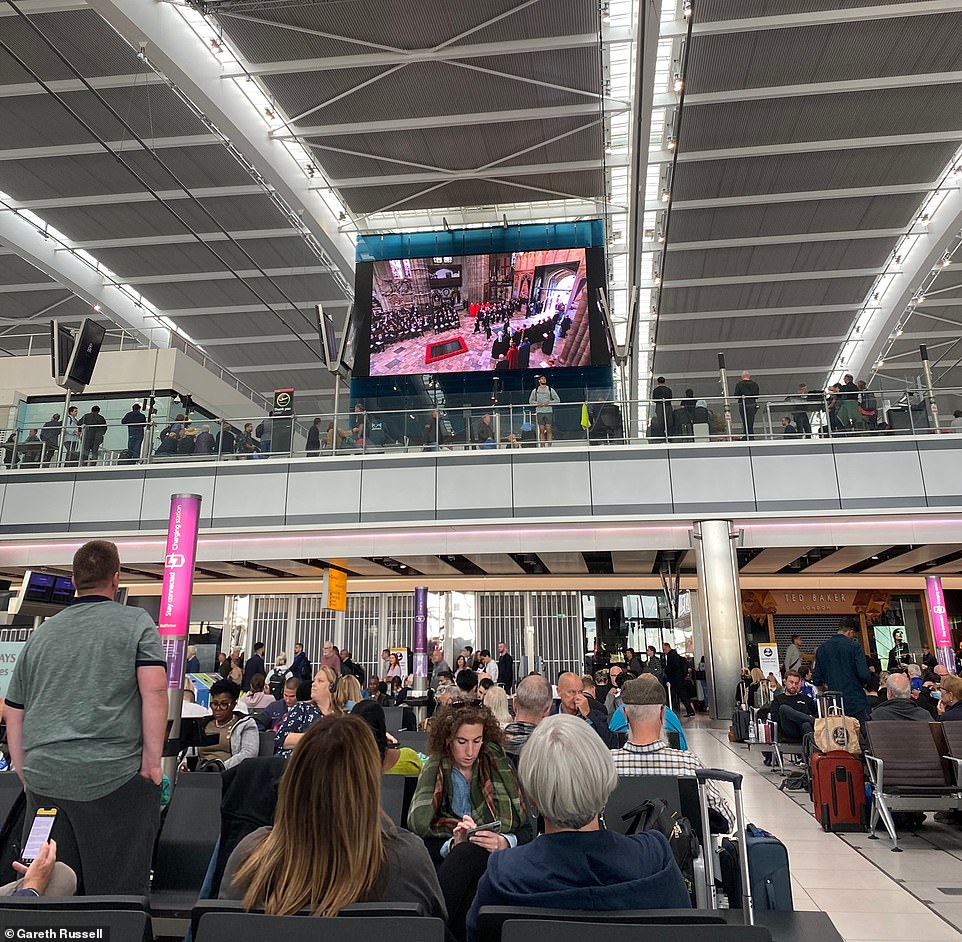 HEATHROW AIRPORT: Terminal 5 at London’s Heathrow Airport stops in silence for two minutes to pay respects to the Queen 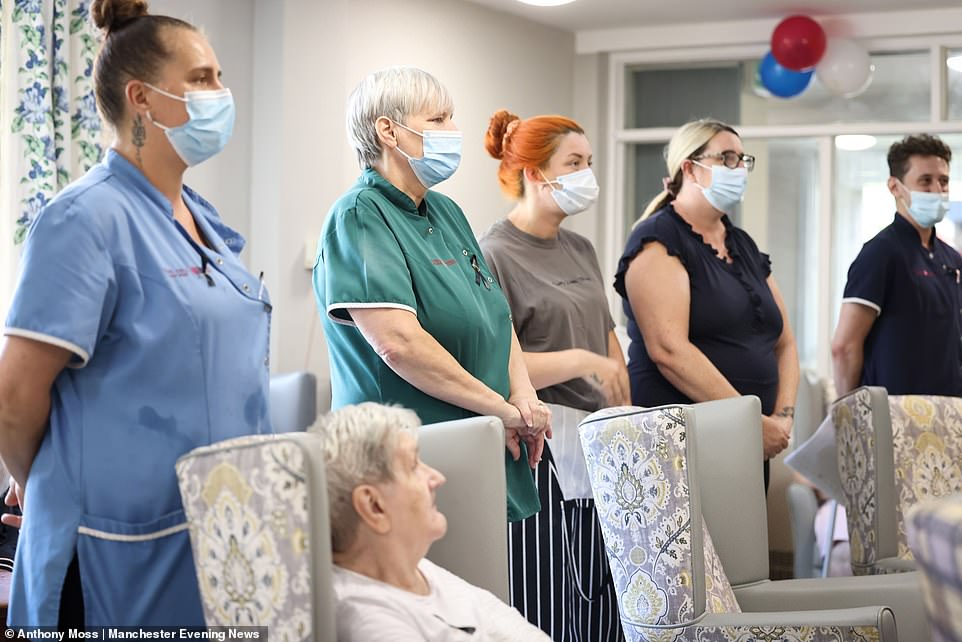 MANCHESTER: Dell Residential Care Home in Manchester came to a standstill as residents and caretakers held a moment of silence in honour of the Queen 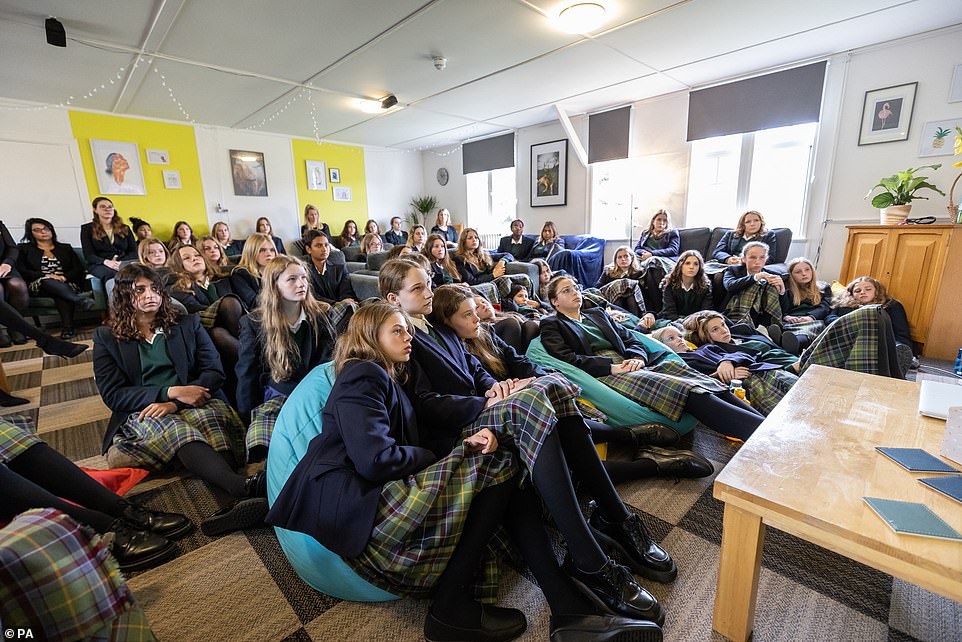 MORAY: Students watch the state funeral of Queen Elizabeth IIl in their boarding house at Gordonstoun School in Moray, where King Charles III once boarded

Photographs captured from across the UK show how life paused for two minutes at 11.55am on Monday, marking the end of Queen Elizabeth’s funeral service in Westminster Abbey, as Britons paid their respect to the nation’s longest-ruling monarch.

The Dean of Westminster led the congregation in a moment of silence that was respected across the country.

State trumpeters from the Household Cavalry sounded the Last Post, signifying the end to the service and beginning the solemn display of respect.

The two minute’s silence was followed by trumpeters sounding Reveille before the National Anthem was sung by the congregation.

Mourners across the UK observed the act of reverence. Some were seen wiping away tears for Her Majesty during two minutes. Others bowed their heads and folded their hands in prayer.

People in pubs, train stations and at airports nationwide were pictured with saddened expressions as they mourned the nation’s longest-ruling monarch. 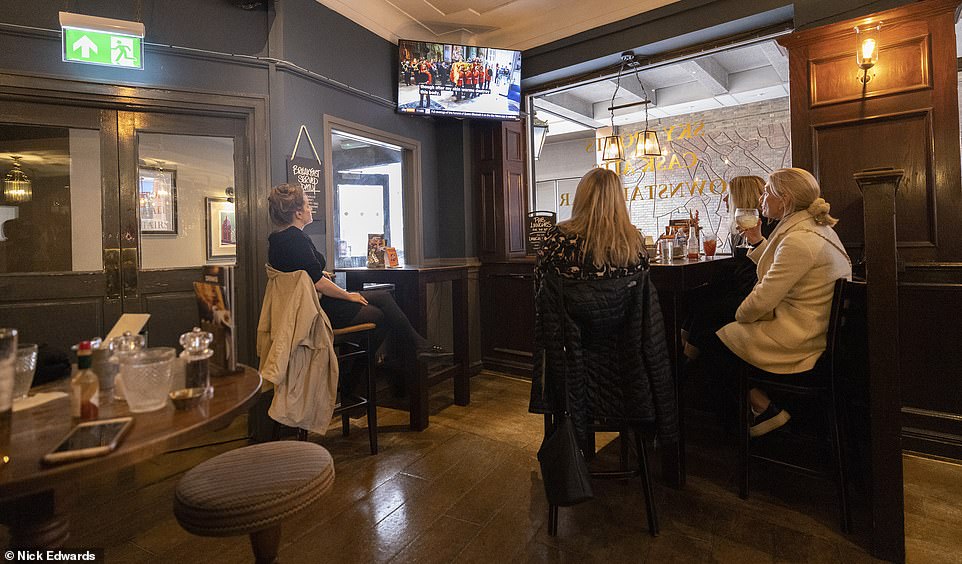 LONDON: Mourners honour Queen Elizabeth II as they watch her State Funeral and procession from a pub in West London 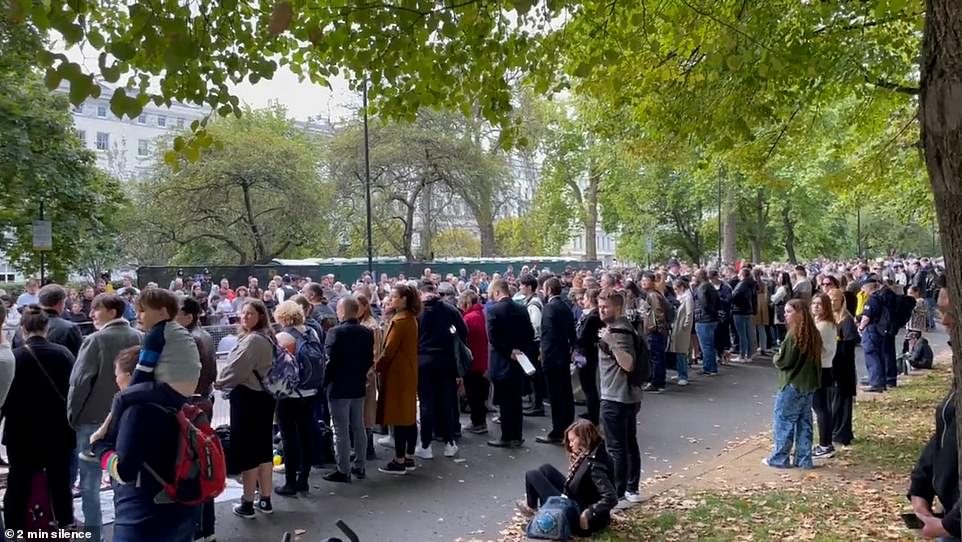 LONDON: Mourners watching Her Majesty’s funeral on big screens in Hyde Park bow their heads in silence to honour their beloved Queen 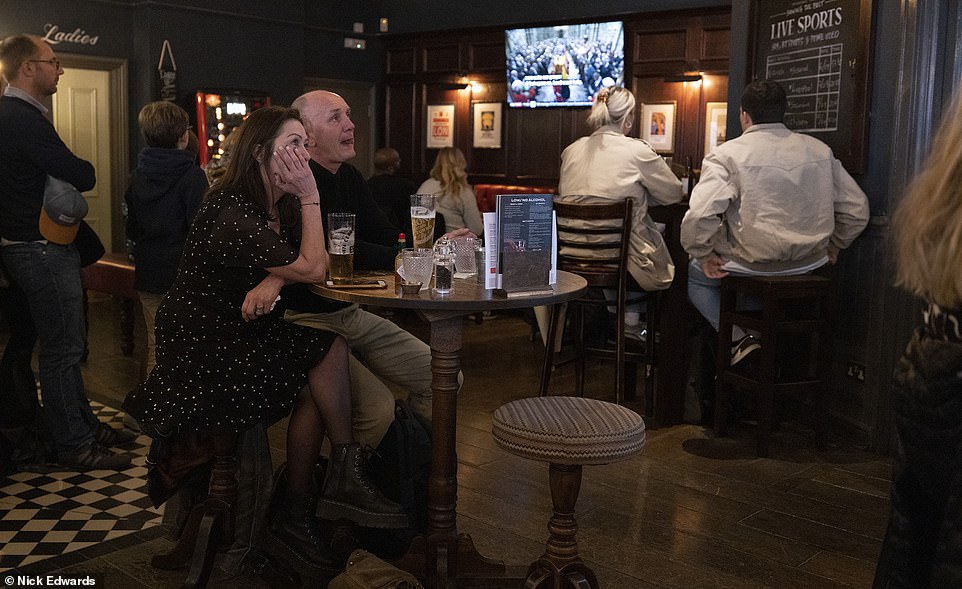 LONDON: Mourners at a pub in West London watch intensely as Her Majesty is honoured during her State Funeral on Monday 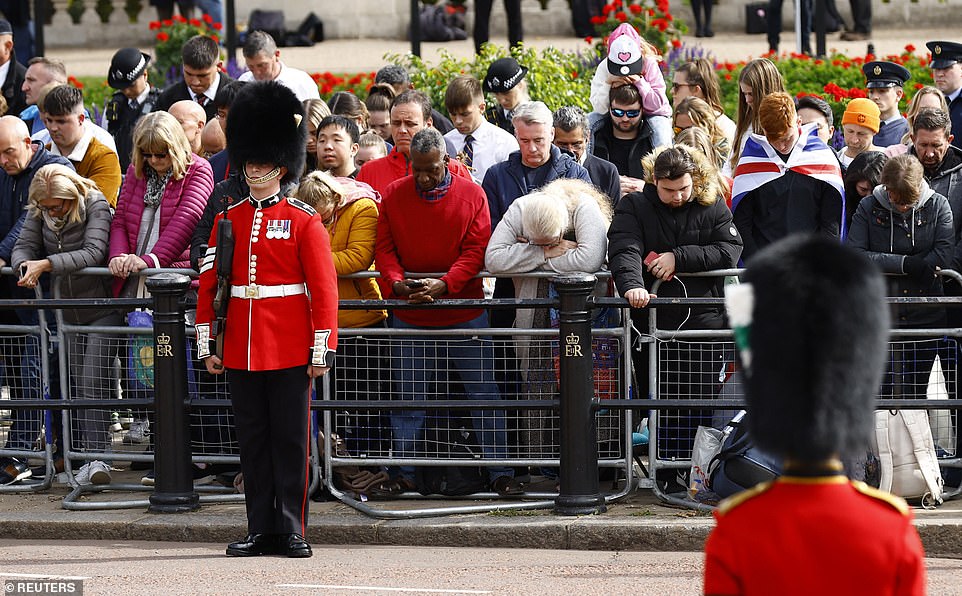 LONDON: Mourners gathered along the funeral procession route bow their heads during the moment of silence honouring Queen Elizabeth II LONDON: Mourners at the Golden Lion Pub in London fall silent as Queen Elizabeth is remembered at her State Funeral 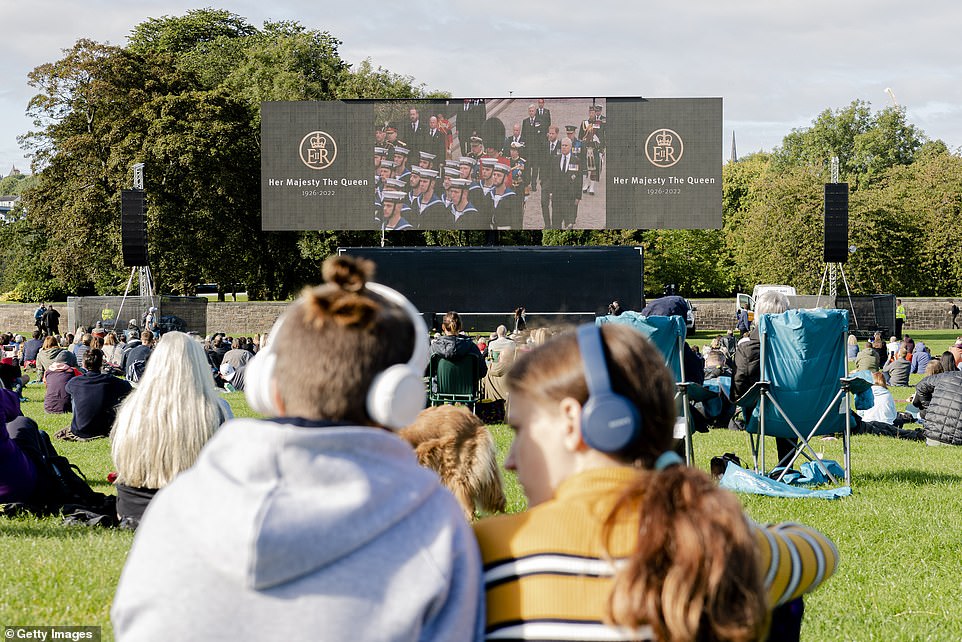 EDINBURGH: Scots gather outside the Palace of Holyroodhouse and watch in silence as Britain honours Her Majesty’s life of selfless duty 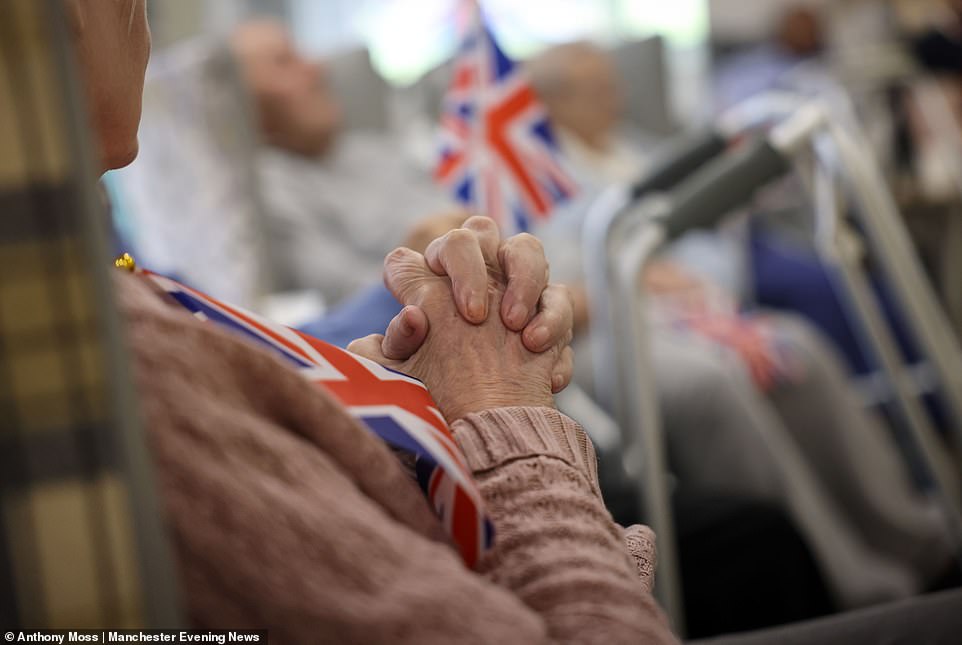 MANCHESTER: A Dell Residential Care Home folds her hands in prayer during the moment of silence marking the end of Queen Elizabeth’s State Funeral 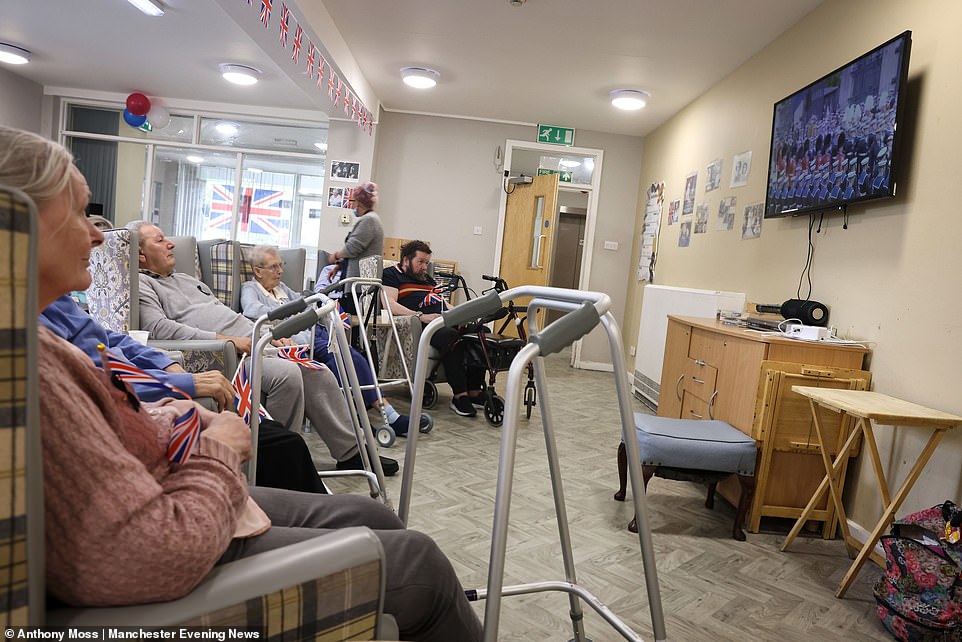 Her Majesty will be laid to rest in Windsor next to her beloved husband Prince Philip and her parents later today after being driven 20 miles from Hyde Park Corner.

Grief was etched on the faces of members of the huge crowds who swamped The Mall, Whitehall and Parliament Square to bade farewell to the beloved monarch.

The crowds broke into applause and cheers after the Queen’s coffin passed them and also when Her Majesty circled round the Queen Victoria Memorial outside Buckingham Palace as Big Ben chimed a mile away.

Once the coffin reached Buckingham Palace, members of staff at the palace bowed and curtsied both at the coffin and members of the royal family as they made their way past. 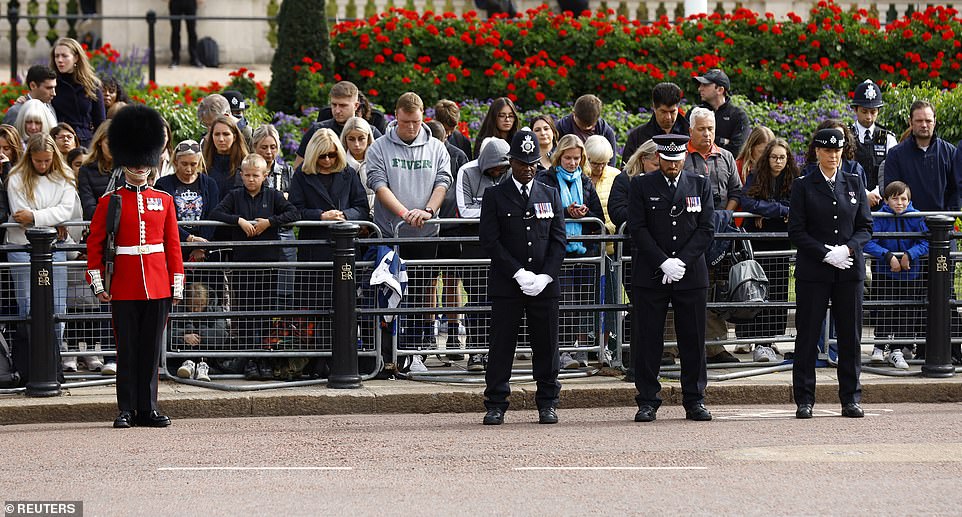 LONDON: Spectators and police officers bow their heads during a moment of silence marking the end of the Queen’s State Funeral 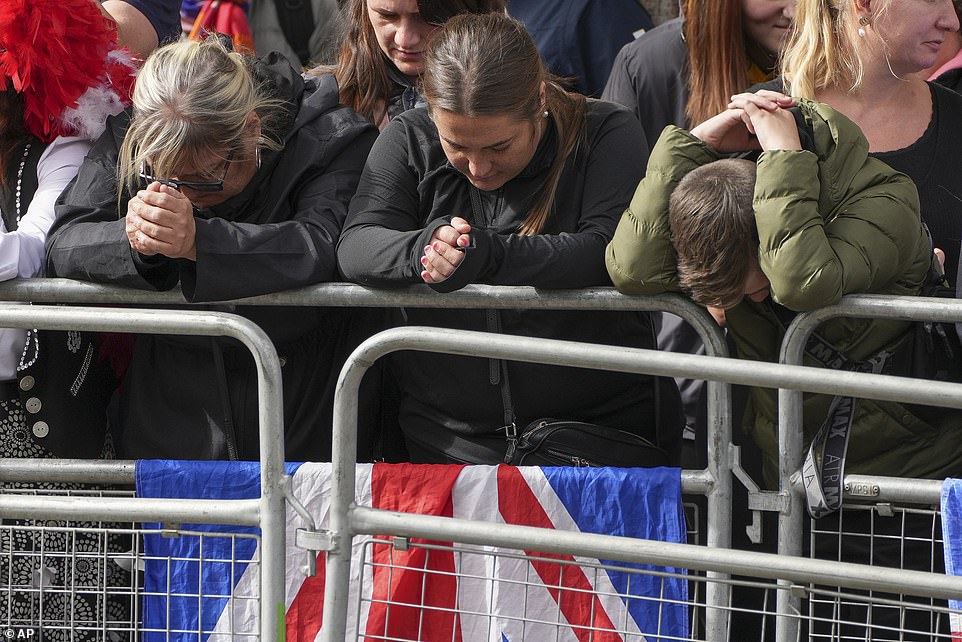 LONDON: Members of the public bow their heads as they listen to the funeral service of Queen Elizabeth II 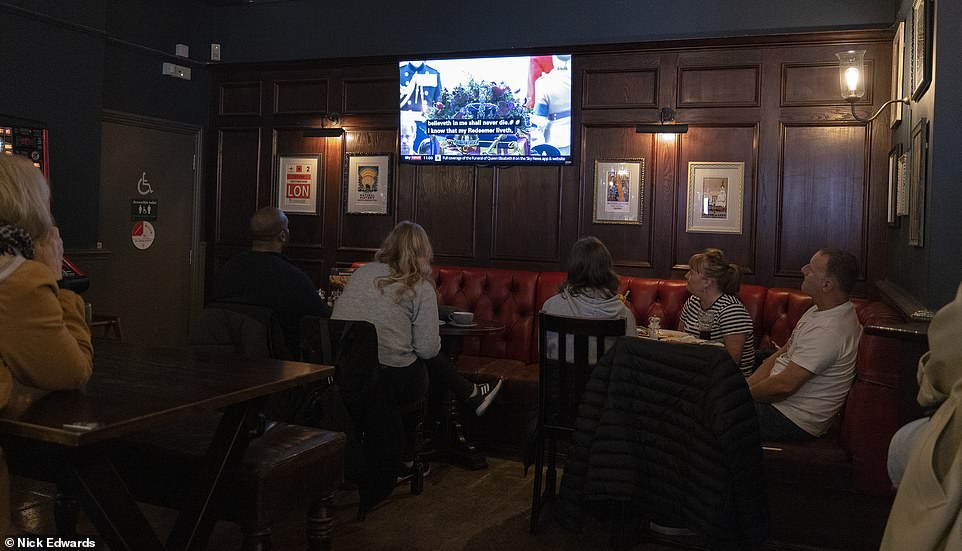 LONDON: Mourners watch the Queen’s funeral from a pub in West London 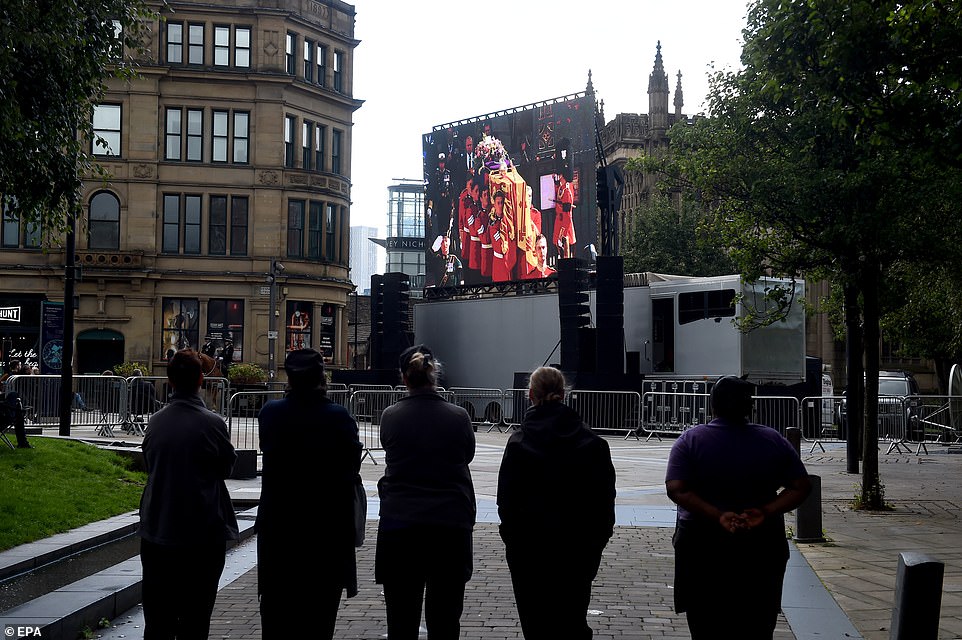 MANCHESTER: Mourners observe a moment of silence as they watched the State Funeral of Queen Elizabeth II on the screen in Cathedral Gardens in Manchester LONDON: A family watches the funeral of Queen Elizabeth II from their phones in London 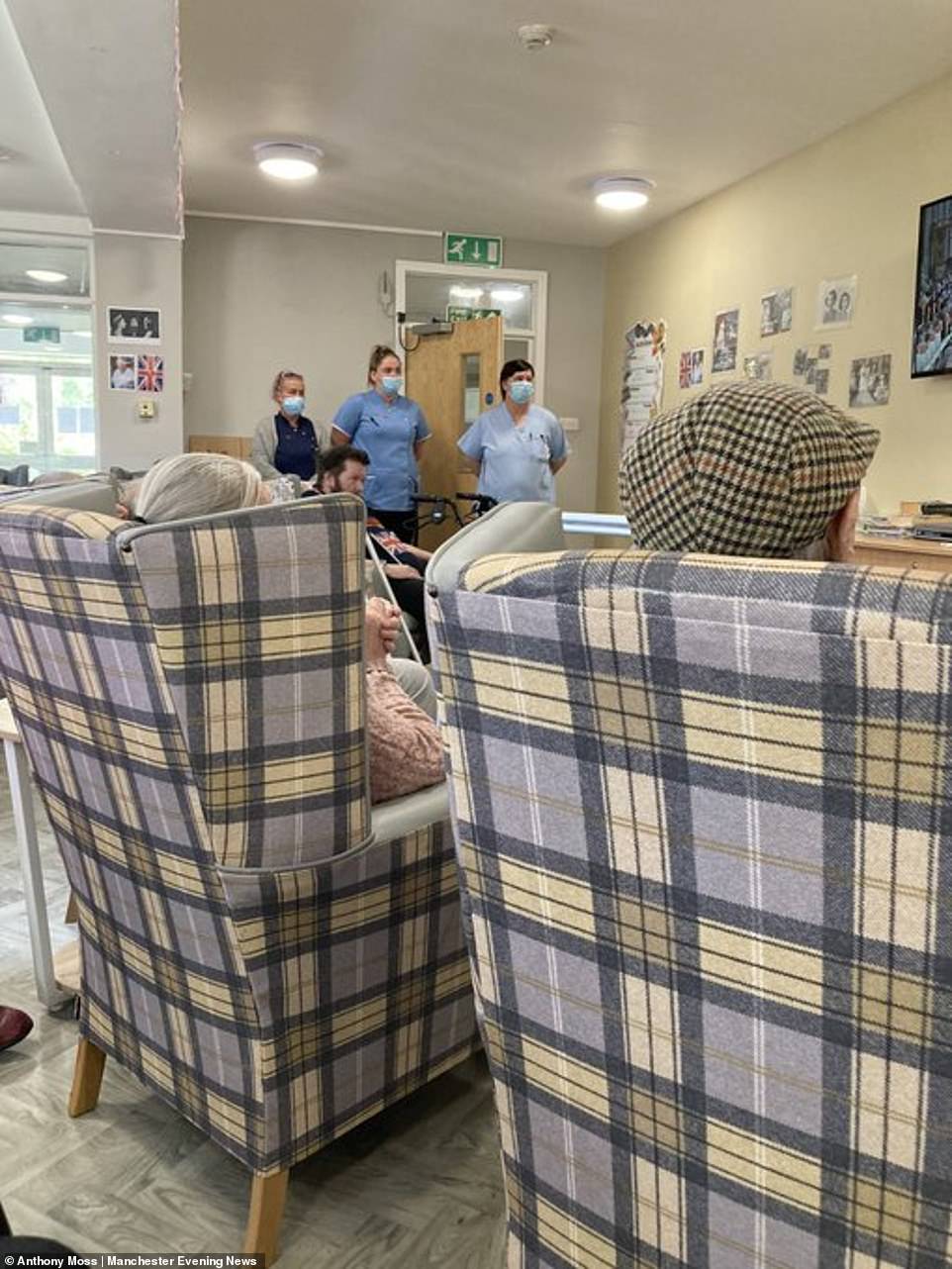 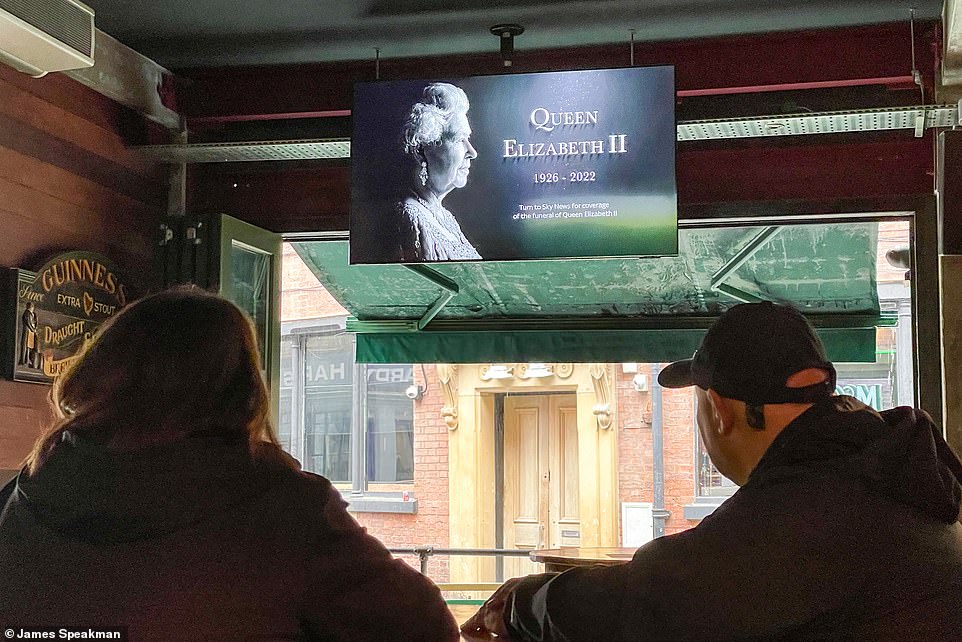 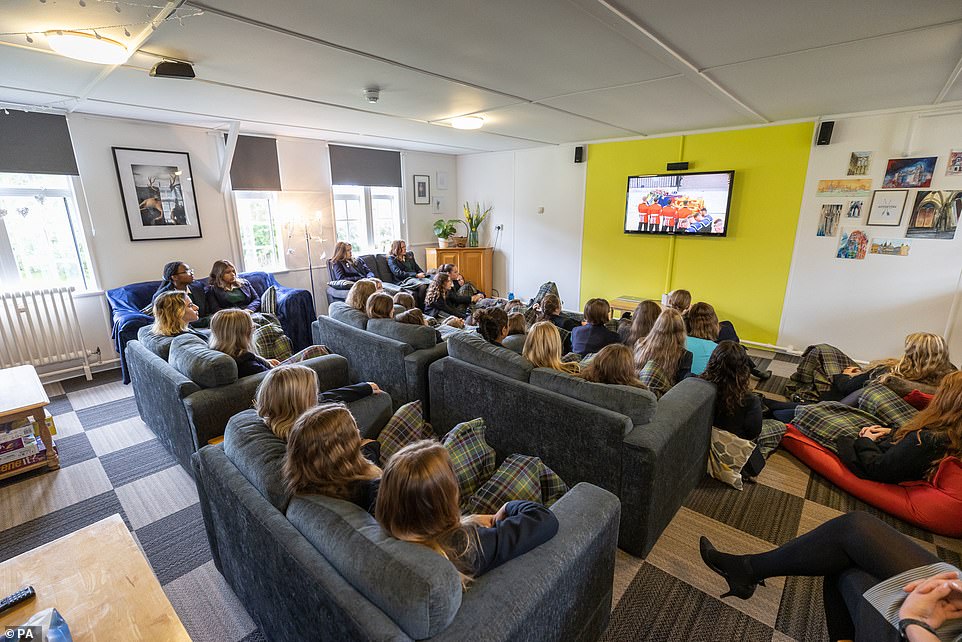 MORAY: Gordonstoun School students honour the Queen with a moment on silence