Margarethe of Denmark’s cancels own jubilee in ‘respect’ for Queen

Queen's grandchildren all 'special to her' says Roya Nikkhah

Out of respect for the late Queen Elizabeth II, Danish Queen Margrethe II called off events to mark the 50th anniversary of her accession to the throne. Elizabeth’s third cousin and friend cancelled a carriage procession through Copenhagen and a palace balcony appearance, while a reception and lunch at City Hall were postponed. It marked the second time Margrethe, who acceded to the throne in January 1972, has put off her Golden Jubilee celebrations, marking the actual anniversary last January with a smaller celebration due to the COVID-19 pandemic.

Royal commentators and hosts of Podcast Royal, Rachel Burchfield and Jessica Robinson, noted Margrethe’s decision to call off her celebratory events, saying it highlights the “respect” the Danish monarch had for Queen Elizabeth.

Ms Robinson said: “Queen Margrethe II of Denmark is now the only reigning Queen in Europe and this year is actually a Jubilee year for her, she is marking 50 years on the throne.

“She’s 82 years old and very well-liked among the public… It should be a time of celebration for her but she sent a sympathy message to King Charles this week saying that ‘Queen Elizabeth was a towering figure among the European monarchs and a great inspiration to us all. We shall miss her terribly.’

“She also went as far as to scale back some of her own Jubilee celebrations out of respect for Queen Elizabeth and the UK public. It is just a testament to the relationships that Queen Elizabeth built over the years and the respect that Queen Margrethe and people across the world have for her.” 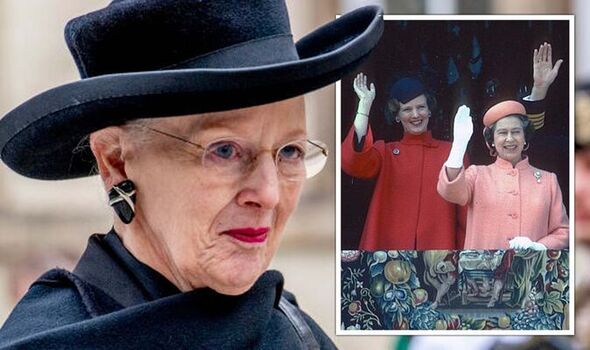 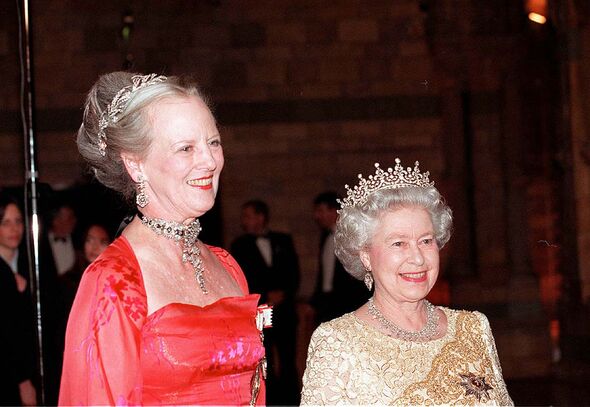 With the death of Elizabeth, Margrethe is now Europe’s longest-serving monarch, just ahead of Sweden’s Carl XVI Gustaf who has been king for 48 years. She is also Europe’s only reigning queen, though four countries – Belgium, the Netherlands, Spain and Sweden – have crown princesses next in line to the throne.

Elizabeth and Margrethe were not only friends but were also distantly related. They are both descendants of Denmark’s King Christian IX, whose daughter was Elizabeth’s great-grandmother, Queen Alexandra. On Margrethe’s mother’s side, the two are related through Queen Victoria via her granddaughter Princess Margaret of Connaught.

In an interview with ITV earlier this year, Queen Margrethe opened up about her friendship with Queen Elizabeth and their nicknames, with Margrethe’s being Daisy and Elizabeth’s being Lilibet.

She said: “That’s the way we have known each other always. That is what we call each other when we see and speak to one another. We are definitely affectionate, but I don’t want to splash it all over the place!”

Elizabeth’s nickname “Lilibet” was adopted in the early years of her childhood when she was unable to pronounce her first name properly. The nickname is used by those closest to the Queen and, in 2021, her grandson Prince Harry and his wife Meghan Markle paid tribute to the monarch by naming their daughter Lilibet Diana Mountbatten-Windsor.

Margrethe’s nickname was given to her by her family as it was the nickname of her grandmother Princess Margaret of Connaught (later Crown Princess of Sweden). The Danish Queen is known as “Aunt Daisy” to many of the European royals and wears a famous daisy diamond brooch on formal occasions. 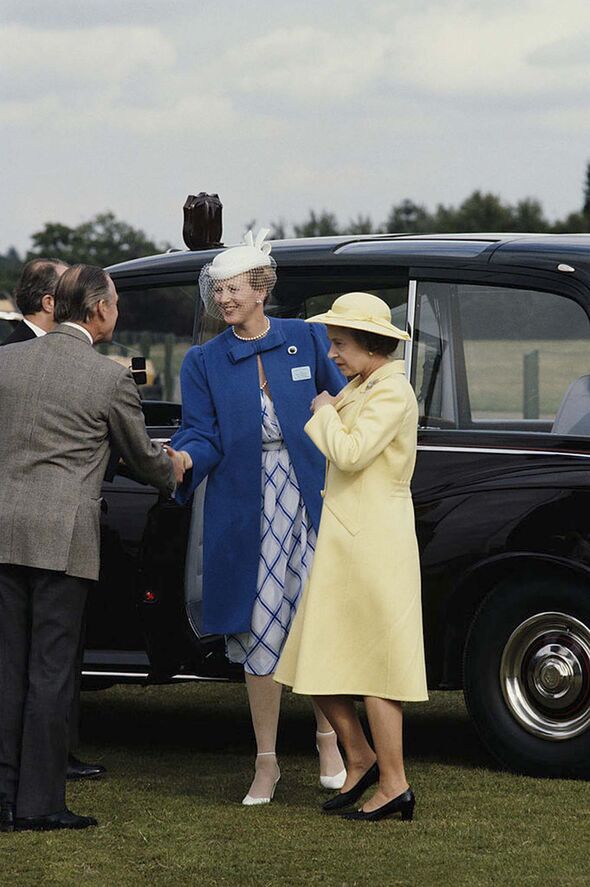 Margrethe, who is 14 years Elizabeth’s junior, later described how her cousin had acted as an example for her in the way she dealt with the burden of queenship. Elizabeth was only 25 when her father, King George VI, died and she inherited the throne.

Margrethe said: “When I was growing up, I hoped I wouldn’t be as young as that when my father died.

“It made an enormous impression on me. The fact that she was dedicating her life. I understood what that meant. This is for life. That is the whole point of my life. And I know she sees that too.”

“When I was growing up, my mother and father said to me, look at what they do in England, and I could see that it could be done and it was worthwhile and you could live a very full life with it, even with a heavy schedule and demanding job.

“Both she and I see it as a dedication, but also a job.” 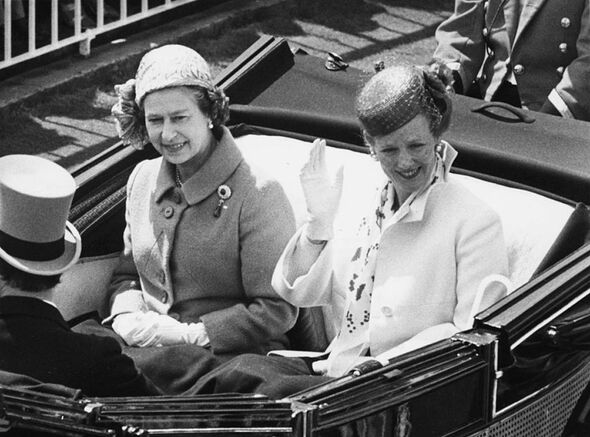 Margrethe paid tribute to her late cousin during the scaled-back Jubilee events that did go ahead following Elizabeth’s death. During her celebration, the Queen took time to acknowledge the death of Queen Elizabeth.

Last weekend, Margrethe hosted a gala to celebrate her 50-year reign at the Royal Theatre in Copenhagen. Before the event’s festivities began, Margrethe called for a minute of silence to honor Elizabeth. The gala was the sole Jubilee celebration for Saturday; she also held a lunch with the Nordic royals the following day.

Days later, Margrethe sent her special letter to King Charles III that read: “Deeply moved by the sad news of your beloved mother’s death, I send you and Camilla my warmest thoughts and prayers.

“Your mother was very important to me and my family. She was a towering figure among the European monarchs and a great inspiration to us all. We shall miss her terribly.

“Her 70 years of reign and service to the people of the United Kingdom, the Realms and the Commonwealth are an unprecedented and remarkable achievement.

“We shall always remember her important contributions to their development and prosperity.”

While Margrethe and Elizabeth did not see each other regularly, the two Queens made time to reunite whenever possible.

Given that Elizabeth had stopped travelling abroad in the years before her death, Margrethe would see the British monarch when visiting London.

She told ITV: “She always invites me for lunch when I am in London – when we talk about family, how things are going in this country and that country and what the children are up to.” 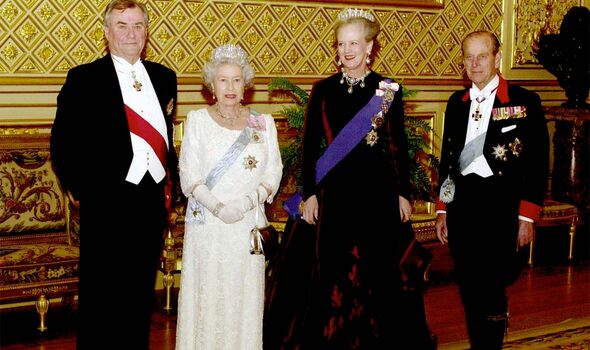 The last time Margrethe visited the British capital was for the service of thanksgiving for Prince Philip in March. Margrethe was also a cousin of the prince’s, again through Queen Victoria and her Danish ancestor. The Duke of Edinburgh was born a prince of Greece and Denmark.

The Danish Queen, along with heir to the throne Crown Prince Frederik and his wife Crown Princess Mary, are to attend the funeral of Queen Elizabeth II in London on Monday.

They will be among a number of European royals travelling to the UK to mourn the loss of the country’s Queen.