Millions of mourners have descended on London over the last week, where they have joined a lengthy queue to pay respects to the late Queen Elizabeth II. The monarch’s body is currently lying in state at Westminster Hall, a building on the capital’s Parliamentary estate, where the coffin arrived on September 14. Not everyone will have the opportunity to pay their respects to the Queen in person before she travels to her final resting place. Officials have decided to close the queue this evening after opting to cap attendees on Saturday evening.

Why did the queue to view the Queen’s coffin close?

The queue to see the Queen’s closed casket in Westminster closed this evening ahead of her funeral on Monday.

Tens of thousands of people remained in the miles-long parade of mourners, who faced 13.5-hour wait times on Sunday morning.

The Department for Digital, Culture, Media and Sports (DCMS) warned people not to join the line from 9.30am today as they faced “disappointment”. 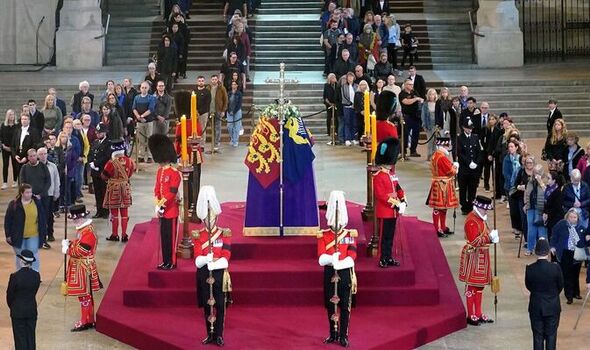 The department said: “A decision will be taken today on when entry to the queue for Her Majesty The Queen’s Lying-in-State will close as it reaches final capacity.

“Queue times are already 13.5 hours and may increase. To avoid disappointment please do not set off to join the queue.”

The waiting time had increased to 14 hours by 10am, with queues extending from Westminster Hall to Tate Britain.

An alternative, accessible queue for disabled mourners had already closed on Saturday, September 17 when all timed slots were filled.