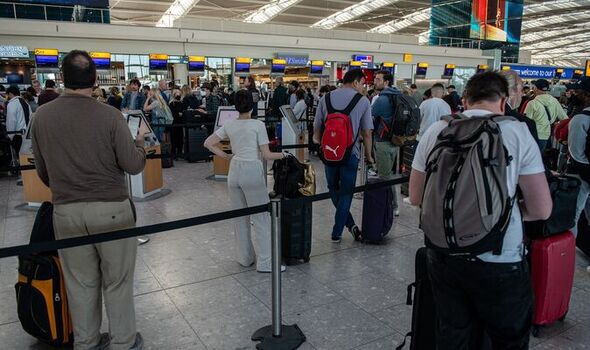 All year UK airports have struggled to cope with the post-pandemic demand for flights abroad after shedding staff in lockdown – and then being slow to refill those vital security, baggage-handler and check-in staff roles. Earlier this month Manchester Airport’s new managing director Mark Woodroofe cheerfully declared normality was on the horizon by announcing: “The big issues of earlier this year are behind us.”

But the summer school break-up has plunged our airports back into crisis, with the all-too-familiar sight of long, snaking queues filling up our terminals again.

Scenes from Manchester Airport on Friday morning even showed hours-long queues drifting out of the building and into the nearby car park.

In Manchester, passengers said they had to endure long waits for their luggage, understood to be due to staff absences amid this week’s recent record-breaking 40.3C heatwave.

There were reports baggage conveyor belts broke down for around 30 minutes in Terminal 1, and others said there were two-hour delays in Terminal 3.

Elliott Ward, 23, a transport planner from Manchester who arrived from Barcelona into Terminal 3, got caught up in the chaos explaining: “We got off the plane after landing 20 minutes previously. Signs said to go to the relevant conveyor belt.

“About 10 items appeared, then nothing for two hours as there was a ‘technical issue’! There were items from other flights just going around in circles on the other conveyor belts.

“A few more flights arrived and they just piled into baggage collection and were faced with the same problem.”

Manchester Airport stressed there were no issues with security queues – and the queues caught on camera were instead the responsibility of airline check-ins and ground handlers.

They added: “The outside spaces are often used for passengers when it is busy to manage queues and to ensure there isn’t congestion inside the terminal.

“I’ve heard of no issues this morning and imagine while the images look busy, the queues have moved quickly.”

Just days ago Manchester Airport’s boss Mr Woodroofe accepted that he cannot promise passengers a “great” experience this summer – but hoped “the vast majority” of passengers to have a reasonable experience.

Most will “get through security in 30 minutes, get on their plane and fly away”, he said. But he admitted “there’s going to be examples where that doesn’t happen, and in advance, I’m sorry about that. That’s a terrible thing to have happened because we want everyone to get on their way.”

Long queues, delays and cancellations have frustrated many thousands of would-be holidaymakers since before Easter. The sector is under pressure to improve its performance amid concerns of further disruption over the summer.

Critics accuse airports and airlines of cutting too many jobs during Covid after first accepting furlough cash – now many in that axed experienced pool of workers have turned their back on the travel industry for more secure roles.

Some airlines, such as Ryanair and Jet2, have been less impacted and boast that they started recruiting early enough and have not been affected by staff shortages.

While Gatwick’s head of security, Cyrus Dana, said hundreds of new colleagues had already been recruited and this effort would continue until October. Hiring for next year has already started.

“There will be very rare occasions when you may join a queue outside of [the] departure [area]. But what I can encourage people to think about is that the queue will dissipate very quickly,” he said, with the majority experiencing no more than a 10-minute wait.

And Twitter users have agreed in recent days that Gatwick queues have dramatically speeded-up.

Paul Charles, chief executive of travel consultancy The PC Agency, tweeted on Thursday: “Big congrats to Gatwick Airport this afternoon – it took me just 8 minutes from the train and through security (hand luggage only).

“Queues were very, very short and there were plenty of staff at security, assisted passenger desk and check-in. Smooth on a busy day.”

This could be partly also due to Gatwick Airport recently capping summer flight numbers – something Heathrow Airport has also recently introduced.

The government also allowed airlines to return their flight slots, which British Airways used to reduce its August-October schedule.

Garry Wilson, chief executive of EasyJet Holidays said even though the airline had cut some flights from schedules more than 70 per cent of those passengers had now been rebooked.

One glimmer of good news for London Heathrow passengers is that the prospect of disruptive industrial action by their British Airways check-in staff has ended after workers accepted a pay offer.

Members of Unite and the GMB had voted for industrial action in a row over a pay cut during the pandemic but after extensive negotiations, the company made a new offer, which members were balloted on and accepted.

Unite general secretary Sharon Graham boasted: “This is a great result for our check-in members at British Airways.

“By standing together, they have forced a corporate giant like BA to do the right thing and restore levels of pay slashed in the pandemic.”

Unite said the offer, which will be paid in several stages, is worth 13 per cent. While Nadine Houghton, GMB national officer, added: “No one wanted a summer strike at Heathrow, but our members had to fight for what was right.

“This improved pay deal came because of their efforts.”

A BA spokesman said: “We are delighted with this positive news.”