Mother-of-two, 36, who was ‘gang raped by four men’ in west London reveals how she lost 17st in a YEAR when she turned her life around after ‘using eating as a form of attempted suicide’

A mother of two who says she was gang raped by four men has revealed how lost 17st in a year.

Personal trainer and nutritionist Andreina De Sousa, from Twickenham in West London, weighed 27 stone after she said she used eating ‘as a form of suicide’ following the attack.

But the 36-year-old has now lost 17 stone in just over a year and gone from a UK dress size of 26 to a slim size eight.

Ms De Sousa did not struggle with her weight growing up and it was not until a traumatic event occurred in Southall, West London, in 2014 that she lost control of her eating habits. 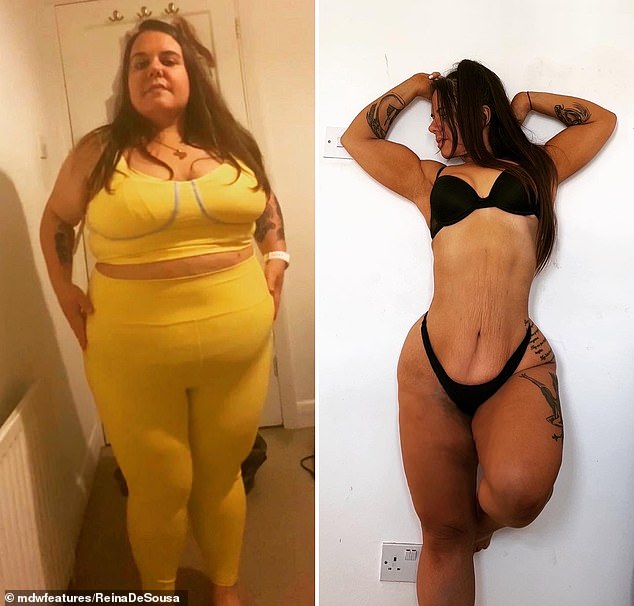 ‘I wasn’t always fat, I was curvy and a Zumba instructor as-well-as teaching pilates. I was fit and healthy,’ said Ms De Sousa.

‘But after the rape I turned to food for emotional support because at that same time I was raped I became homeless and my kids were taken from me.

‘I had no time to sit there and reflect on my emotions because everything was happening all at once, and due to blocking things out I became cold, I became a version of me I never want back.

‘I turned to food for support, because I could mask it as a form of suicide, the more ate the fatter I got the more I didn’t recognise the woman staring back at me in the mirror.

‘I was content with that because I always thought I got raped because of the way looked, I thought it was my fault. Fast foods were my Kryptonite, takeaways mostly fried or Chinese, the smell of Indian food still triggers me to this day so I stay clear of it as the rape was done by Punjabi men.’

Ms De Sousa – who says her attackers were never brought to justice – reached a dangerous 27 stone and doctors told her if she continued with this lifestyle she would not be around to watch her two children grow up.

She knew her eating habits were out of control and because she had not been overweight before she felt she needed some assistance to lose the weight.

She decided on a gastric sleeve to help her to control her binge eating. 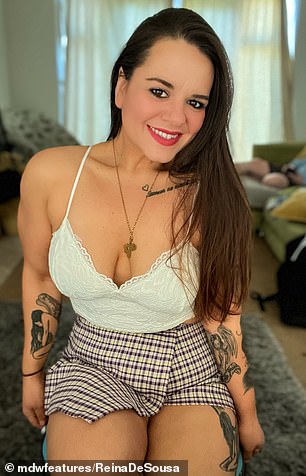 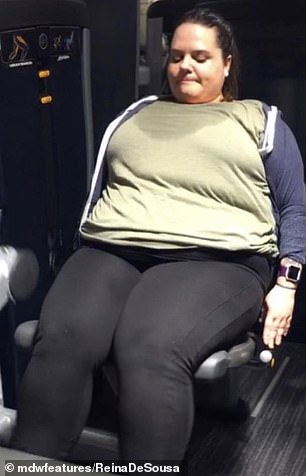 Ms De Sousa did not struggle with her weight growing up and it was not until a traumatic event occurred in Southall, West London that she lost control of her eating habits (pictured: Ms De Sousa before (right) and after (left) her weight loss

Ms De Sousa had to travel to the Czech Republic alone and she had quite severe reactions to the medications they gave her.

She was also separated from her support network of family and friends for 16 days during one of the most trying periods of her life.

Born and raised in Venezuela, Ms De Sousa moved to the UK in 1996 with her mother, father and four siblings.

She now has two children of her own, including a daughter, Jessica, who was born in Venezuela in 2007. When Ms De Sousa told him she was pregnant he left her.

She also has a son, Alex, born in the UK in 2010 with a different man. Alex sees his dad regularly but Ms De Souza and Alex’s father are no longer together.

‘All of it was settled in court and even though he put me through hell I would never stop him from raising his son,’ said Ms De Sousa.

‘The issues were between me and him, not me, him and our son. He plays a huge part in Alex’s life and I’m happy with that, I would never stop him from seeing Alex.’

Ms De Sousa was able to try to move on with her life and eventually was able to start a new relationship six years after she was raped.

‘Fast forward a few years I got into a serious relationship, and he was the man that helped break free from the darkness I lived in,’ she said.

‘We aren’t together anymore because through the years we were together he cheated, and this made me lose so much confidence in myself.

‘But I got over it. I fought for myself, my health and my kids every single day – I focused on me. 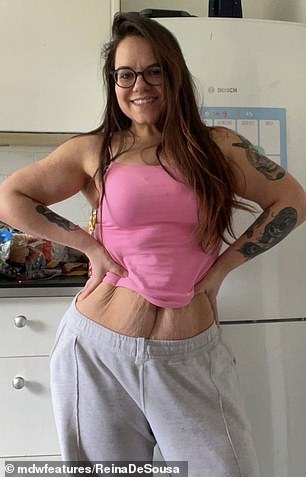 ‘Now I do not let trauma and fear control my every move, I strive from my past. I see success from my trauma experience. I am a better person today.

‘This is all mostly thanks to my sister Linda she has been my rock, my teacher, my inspiration, my emotional support through every step in my life it’s almost hard to believe she’s my little sister because I look up to her every single day she inspires me to be a better version of myself.

On July 13, 2021 Ms De Souza got gastric sleeve surgery at the Ivy Clinic in Brno Czech Republic. The procedure including flights and accommodation cost her £7,000.

‘On the day of the surgery, I let fear take over me. I thought the worst case scenarios that I was never going to wake up or that I’ll enter into a coma and never see my kids or family again or that my heart would stop.. The fact that I was in a foreign country by myself made it even worse.

‘We were still mid-pandemic so I had to leave for 16 days as quarantine was ten-days.

‘When I had all my pre-op checks, I knew things were getting real and slowly that version of me that got raped started to crawl back into my head I started to think no I can’t do this.

‘But with every force in my being I pushed those thoughts out and replaced them with my kids.

‘I wanted to live longer for them. I wanted to be able to do so many activities with them that I could never do as a bigger person. I could take walks with them and play with them.

‘Once I had the operation and came around the pain was out of this world. I had the worst reaction to omeprazole and DVT injections and the only thing that played in my head was why did I do this? I’m going to fail at it like I have everything else.

‘This weightless journey has not only been just for my body but it has been for my mind too, the clarity I have gotten the mental peace and stability is a breath of fresh air.

‘I learned that I am a go-getter, I am a badass that when I set my mind and time into something, it can be done.’

Asked for her advice for other women looking to lose weight, Ms De Sousa said: ‘Focus on yourself one small achievement at a time.

‘The secret of change is to focus all of your energy not on the old but on building the new you.

‘Have the discipline to do what you know should be done even when you don’t feel like doing it.

‘Most importantly it’s not about perfection its about effort and when you bring that effort every single day that’s where transformation happens.’

For confidential support, call the Samaritans on 116123 or visit a local Samaritans branch, see www.samaritans.org for details.