Home » Politics » How Did the Democrats Do on Tuesday in 2016 Trump Country?

How Did the Democrats Do on Tuesday in 2016 Trump Country?

They were the states that broke Democratic hearts the last time — and the ones where any political comeback would have to begin.

So how did the Democrats do on Tuesday in 2016 Trump country? They won. They also lost. And both experiences are instructive for the party’s future.

This year, The New York Times focused on seven states where Democrats hoped to dig out after losses two years ago. Some were traditionally blue areas, like Pennsylvania and Wisconsin. Some were clear reaches, like Texas and Tennessee. Read the start of the series here.

Here’s a look at how the party fared:

Read the story: Trump Won Pennsylvania. Democrats Want the State (and His Voters) Back.

Even after the president’s victory, Pennsylvania Democrats seemed well positioned to win re-election in contests for governor and the Senate, with relatively popular incumbents (Gov. Tom Wolf and Senator Bob Casey) and weak opponents. And win they did, easily.

The biggest test was in the House. Democrats passed that one, too, picking up several seats under a redrawn district map. Of particular interest were two races in districts that Mr. Trump carried in 2016 — a proving ground for Democrats eager to demonstrate that the state can be theirs again in 2020. They won both by comfortable margins, sending Conor Lamb and Matt Cartwright back to Congress.

Mr. Lamb, who won a special election in March in a deep-red western Pennsylvania district, provided an early template for how to win in Trump country. An affable former Marine who focused on labor rights and economic fairness, Mr. Lamb took care not to alienate Trump voters by antagonizing the president.

Mr. Cartwright, running in northeastern Pennsylvania, was likewise committed to understanding conservative constituents. He said he had taken up deer hunting as a point of bonding.

The pair will be joined in Congress by several Pennsylvania women who won on Tuesday, including Madeleine Dean, Chrissy Houlahan and Mary Gay Scanlon in suburban Philadelphia, and Susan Wild in the Lehigh Valley. 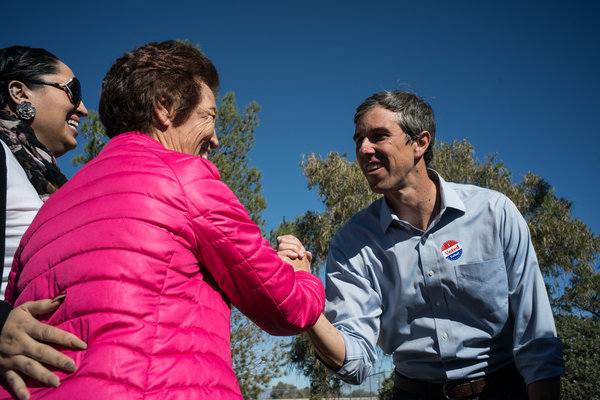 Senator Ted Cruz was cocky. “This is Texas,” he swaggered at campaign events, suggesting it was folly to think that his Democratic opponent, Representative Beto O’Rourke, could change the makeup of the state’s electorate through sheer force of personality and progressivism.

“Perhaps in Massachusetts,” Mr. Cruz said in an interview in August, sipping a Texas-brewed beer at a bar outside Houston.

In the end, both candidates were right. Mr. Cruz survived on Tuesday with an emphasis on cultural conservatism and a spirited defense of Mr. Trump, his former rival in the 2016 presidential primaries. And Mr. O’Rourke turned out a remarkable number of voters — more than 4 million, about three percentage points behind Mr. Cruz — proving that a different kind of Democratic campaign could make the party competitive in Texas. His strength around some of the state’s major population centers also helped lift congressional candidates in key battlegrounds.

Still, the way forward for Democrats in statewide races there is uncertain. It is hard to imagine future candidates replicating many of the forces that powered Mr. O’Rourke: his charisma and viral status on social media; his prolific fund-raising; an opponent like Mr. Cruz, who can be polarizing even within his own party. And Mr. O’Rourke still lost.

Yet even before he had, the calls for a 2020 presidential candidacy were well underway. They will not soon stop.

Few losses were more alarming for Democrats in 2016 than this one. On Tuesday, there was redemption, mostly.

With a focus on recapturing union voters who were often cool to Hillary Clinton two years ago, Michigan Democrats saw their emphasis on lunch-pail economic issues rewarded this week with decisive wins in a governor’s race (Gretchen Whitmer), a Senate re-election (Debbie Stabenow) and several down-ballot contests.

But Republicans’ deepest fears on Tuesday were not realized. Democrats had hoped to flip enough local seats to take control of the State Legislature. They fell short.

Still, the results seemed to suggest that despite Mr. Trump’s visceral appeal to some labor households, his success in 2016 had quite a bit to do with the unpopularity of Mrs. Clinton. “We got a lot of pushback on Hillary,” Bill Black, a leader of the Teamsters union in Michigan, said months ago, sizing up the contest for governor. “We’re not seeing that with Gretchen.”

At last, the Democrats got their man.

Scott Walker, for years an avatar of the Republican dominance of state-level politics across the Midwest, will be governor no more. He lost, narrowly, to Tony Evers, the state’s schools superintendent.

Read the story: Democrats Want to Beat Scott Walker. But the Wisconsin Economy Is a Hurdle.

The Democratic campaign message in Wisconsin in many ways mirrored the party’s argument nationally, with a focus on health care, education and infrastructure spending. But Mr. Walker, despite presiding over a strong economy, proved particularly vulnerable to these kinds of attacks: He had pushed to repeal the Affordable Care Act and overseen steep cuts in education spending early in his tenure.

But Republicans in the state seem disinclined to cede power without a fight. Leaders in the legislature are already discussing ways to limit Mr. Evers’s authority before he is sworn in.

Democrats had hoped that their unlikely path back to a Senate majority would run through this right-leaning Southern state with a reputation for elevating pragmatists over ideologues.

They assumed that their nominee, the former Gov. Phil Bredesen, was a good fit, more stylistically equivalent to the Republican he was running to replace, Senator Bob Corker, than the Republican nominee herself — Marsha Blackburn, a hard-line conservative.

Read the story: A Changing Tennessee Weighs a Moderate or Conservative for Senate

It did not matter. Ms. Blackburn won easily, suggesting that the state will not be particularly hospitable to Democrats any time soon. Mr. Bredesen won all 95 counties in the state when he was re-elected as governor in 2006. If he could not keep a race close — after coming out in support of Justice Brett M. Kavanaugh, after speaking warmly of gun rights — it is hard to envision another Democrat faring much better.

“In our mind we think we’re a little more progressive, a little more advanced,” Raumesh Akbari, a Democratic state legislator in Memphis, said of Tennessee before the election, comparing it to other reliably red states. “But I don’t know.”

In 2016, Mr. Trump effectively took this once-purple state off the board, winning by eight points. Tuesday’s results make it clear he should enter 2020 as a strong favorite again.

Despite high hopes among Democrats who thought they might flip several statewide offices, Republicans had a very good night, starting at the top of the ticket. Mike DeWine, currently the attorney general, was elected governor, turning back Richard Cordray, the Democratic nominee who had led the Consumer Financial Protection Bureau.

Read the story: ‘When You Think You’ve Got It Figured Out, It Flips’: Democrats Puzzle Over Retaking Ohio

In defeat, Mr. Cordray won more votes than the incumbent, Gov. John R. Kasich, earned in either of his victories — and still lost to Mr. DeWine by more than four points.

The outcome was sobering for Democrats. Mr. Trump’s success in once solidly blue corners of the state, particularly with many old-guard union voters, seemed to carry over at least in part to Republicans in a nonpresidential year. And Mr. Cordray was never going to approach the kinds of numbers that President Barack Obama enjoyed with young and African-American voters when he won the state in his two campaigns.

“Donald Trump has completely disintegrated the old Democratic coalition in Ohio,” said Michael Hartley, a longtime adviser to Republican campaigns in the state. “And I think to a lot of people’s surprise, the Trump voters came out.”

Going into Tuesday, Democrats had constructed a sort of lab experiment for their party’s future: Their candidate for governor, Andrew Gillum, was a young African-American progressive who had electrified liberals across the country. Their candidate for the Senate, Bill Nelson, was seeking re-election as a white septuagenarian centrist who joined Congress the year Mr. Gillum was born.

Read the story: A Centrist and a Liberal Test Florida, and Democrats Everywhere Watch Closely

Polls generally showed Mr. Gillum with a small lead over his Republican opponent, Ron DeSantis, a hard-line Trump supporter, leaving Democrats hopeful that the enthusiasm around his campaign might be enough to lift Mr. Nelson in his race against Gov. Rick Scott.

It seems safe to say this did not happen as planned. It does not seem safe to say who won.

While Democrats appeared to lose both races on Tuesday night, the margins have shriveled enough in recent days to dip below the threshold for a recount. Republicans have expressed confidence that their apparent wins will remain wins.

The refrain is familiar.