(Want to get California Today by email? Here’s the sign-up.)

It was Nellie Wong’s 21st birthday, so drinks and country music were in order. She and her friends from California State University, Channel Islands packed into the Borderline Bar and Grill in Thousand Oaks. They went there to unwind several times a week, especially on Wednesdays for the bar’s popular college night.

The evening at the wood-paneled bar began with a live D.J., lots of plaid, line-dancing and clinking drinks. It ended with Ms. Wong hiding as a gunman dressed in all black unleashed a wave of bullets, killing at least 12 people and sending her friends scattering in the mayhem. Ms. Wong spent her birthday hiding instead of dancing, fearing for her life instead of celebrating it.

“I was in there the whole time,” she said, stunned for words.

Several survivors described the beginning of the shooting as a blur of chaos, panic and bullets. Sarah DeSon, 19, who was with Ms. Wong, said the club suddenly filled with smoke. They saw the gunman draw his gun at the front, and they ducked for cover as a rapid clip of bullets spread through the bar. As Ms. DeSon ran outside, she said, several bodies were sprawled out on the floor.

Hours after the shooting, Ms. Wong and four girlfriends were reunited at a nearby gas station where they filled one another in on what each had experienced that night: where they hid during the shooting, how they got out, the dry heaving one experienced afterward and the friends they hadn’t heard from yet.

“I’m so sorry your birthday got ruined,” Ms. DeSon told Ms. Wong, still in a daze.

“She’s alive, though. She’s alive for her 21st birthday,” added Teylor Whittler, 19, who said she was dragged out of the bar by a stranger.

Ms. DeSon said she believed she survived the shooting because of the quick reaction of a friend, Cody Coffman.

“He was protecting everyone,” Ms. DeSon said. “He got up and he just yelled, ‘Everyone, run!’”

Later on Thursday, they learned their friend Mr. Coffman was among those who were killed.

Were you or someone you know at Borderline Bar and Grill when the shooting occurred? We would like to hear from you. Email us at [email protected].

(Please note: We regularly highlight articles on news sites that have limited access for nonsubscribers.) 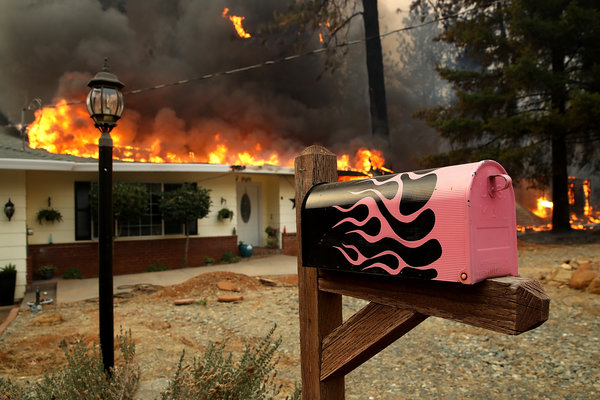 • Parts of Ventura County were also under mandatory evacuation orders as the Hill Fire closed Highway 101 in both directions. [Ventura County Star]

• The gunman in Thousand Oaks was a former Marine who had several interactions with the police in the past. [The New York Times]

• Thirty years ago, California became the first state to ban assault rifles. Its gun regulations have grown only stricter since. [The New York Times]

• Google said it would overhaul how it handles sexual misconduct claims after employees protested last week over revelations of multimillion-dollar exit packages for executives accused of harassment. [The New York Times]

• “Technology doesn’t solve humanity’s problems,” Sundar Pichai, the chief executive of Google, said in an interview about steering the company through the most turbulent period in its history. [The New York Times]

• A federal appeals court in San Francisco upheld a nationwide injunction against the Trump administration’s attempt to end DACA, the program that allows young “Dreamers” to remain in the United States. [The New York Times]

• Ten Democratic incumbents or members-elect said they would vote against Representative Nancy Pelosi, narrowing her margin for error in her bid for the 218 votes needed to regain speakership of the House. [Politico]

• In memoriam: the old Orange County, which died on Tuesday at 129, a columnist writes. The formerly conservative area “is survived by its offspring, who include a population that is about 60 percent people of color, some of the most crowded and poor neighborhoods in the United States and a Republican Party that’s on the ropes.” [The Los Angeles Times | Opinion]

• Why students gather in parking lots and restaurants hoping to find free Wi-Fi so they can do their homework: When the F.C.C. backs telecommunications companies over local governments, low-income residents suffer the most, the mayor of San Jose writes in an Op-Ed. [The New York Times | Op-Ed]

• Are cuddle parties the newest wellness trend in San Francisco? One writer went to see for herself. [SFGate]

Coming Up Next Week

Join us on Tuesday for a discussion at U.C.L.A. about the uneasy marriage of big tech and American society. The panel will feature our tech columnist Farhad Manjoo and our reporters Katie Benner, Nellie Bowles and Sheera Frenkel. Get tickets here.

The Donut City in Seal Beach typically opens at 4:30 a.m. By 7:30 on Monday, The Washington Post reported, the shop had sold out — hours before its usual 2 p.m. close.

Customers were buying a dozen doughnuts at a time, and it wasn’t just their sweet tooths that were bringing them in.

John and Stella Chhan have owned Donut City for nearly 30 years, after coming to Orange County as refugees from Cambodia, according to KCAL. Their regulars noticed Ms. Chhan’s absence in recent weeks: She had an aneurysm and was undergoing rehab, leaving Mr. Chhan to rush to be with her as soon as he sold out of doughnuts for the day.

“I thought, if enough people would buy a dozen doughnuts every morning, he could close early and go be with his wife,” Dawn Caviola, a customer, told The Orange County Register. She posted her idea online, and customers turned out in droves.

“We are so thankful,” Mr. Chhan told The Orange County Register, holding both hands over his heart.