On Brexit Day, the Prime Minister faces an uphill struggle as her key Government allies the DUP join Labour leader Jeremy Corbyn in saying they will vote against her Withdrawal Agreement. Mrs May split the legally binding treaty segment of her Brexit deal from the declaration on future relations with the EU in order to ensure MPs could vote on it today. Her decision to present just the Withdrawal Agreement to the Commons means it is not a third attempt to pass a “meaningful vote” on the Government’s Brexit deal and complies with rules laid down by Commons Speaker John Bercow.

Under the terms of an agreement with Brussels, if passed by MPs on Friday the vote would qualify the UK to be granted an automatic delay to May 22 of the formal date of Brexit.

Mrs May’s move allows the Tories to present the situation as a choice between a short delay to Brexit and the potential for a much longer one, which would mean taking part in European Parliament elections.

But it would not let Parliament go ahead and ratify the withdrawal deal, as Brexit legislation allows this only after the passage of a “meaningful vote” on both the Withdrawal Agreement and a Political Declaration on the future relationship.

The vote comes on the day that pro-Brexit protesters are set to gather outside Parliament to mark what had been scheduled to be the UK’s exit date from the Brussels club.

Meanwhile, Sir Oliver Letwin has tabled his business motion to continue the indicative votes process on Monday to consider Brexit

The motion also raises the potential for a third round on Wednesday.

FOLLOW EXPRESS.CO.UK FOR LIVE UPDATES ON THE BREXIT VOTE BELOW 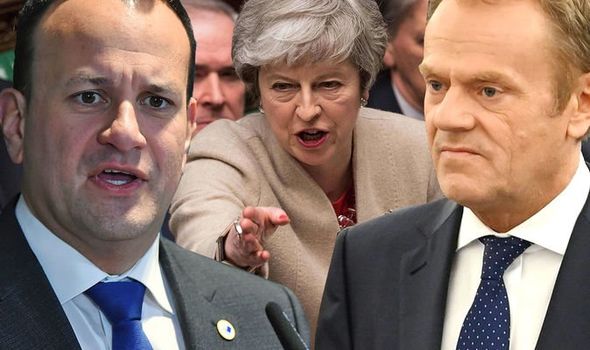 11.21am update: UK would be ‘politically castrated’ if it entered Irish backstop

Sir William Cash told the House: “It is not good enough for us to arrive at a point where we are politically castrated, precisely because for a number of years we will be put at the mercy of our competitors.

“That is the key issue, it’s not just the question of sovereignty in its own right, it’s the practical impact, the result of which we will end up by being put at the mercy of our competitors.”

DUP Westminster leader Nigel Dodds pointed out the DUP represented “more people than anybody else” in Northern Ireland.

He said: “All unionist parties agree that this is a problem for the union – let not people pretend that it is otherwise.

“That is why we have worked very hard with the Prime Minister to try to get those changes to the backstop that would have allowed us to vote on the Withdrawal Agreement.

Sir William Cash replied: “This is true. It is not good enough to speak about our precious union and then to damage it.” 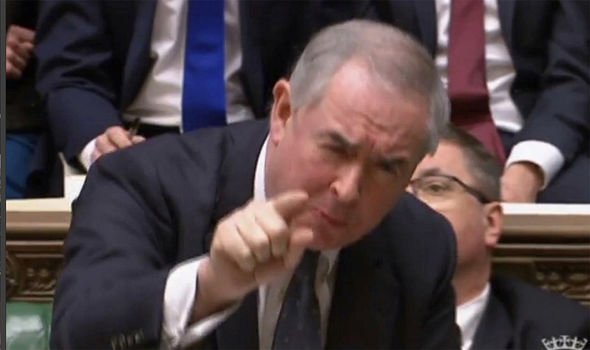 11.09am update: Precious union in danger

DUP MP Ian Paisley (North Antrim) added: “This Withdrawal Agreement places irreversible damage forever and will be lasting on Northern Ireland and on our precious union.”

10.58am update: Tories clash in the Commons

Tory disagreements emerged in the chamber, with Bob Seely, Conservative MP for Isle of Wight, suggesting to Sir Bill Cash that he was “letting the perfect be the enemy of the acceptable” before adding: “Today we have the chance to leave the European Union, and he and others are preventing that happening.”

Sir Bill, chairman of the European Scrutiny Committee, replied: “I, of course, want to leave the European Union but the problem with this Withdrawal Agreement is it does not represent Brexit in the terms in which the repeal of the 1972 Act, which is an Act of Parliament not only of Great Britain but also with Northern Ireland.

Sir Bill criticised the backstop before outlining “serious worry” over the Government’s decision not to publish the legislation to implement the Withdrawal Agreement.

He said: “Ministers, some Secretaries of State, have actually said to me – without disclosing their names – that they do think we should see a copy of this Bill because until we see the drafting of it, it isn’t possible for us to be able to make a judgment about the impact it will have on the repeal of the 1972 Act, which itself is the anchor of the referendum.”

10.51am update: Cox accused of ‘dressing up political shenanigans’

SNP MP Joanna Cherry (Edinburgh South West) said Attorney General Geoffrey Cox was attempting to “dress up political shenanigans” and that the real motivation is to “usher in an unelected right-wing prime minister”.

She suggested Tories should “join the mob outside” after Speaker John Bercow had to intervene to call for MPs to stop trying to “shout her down”.

10.42am update: May blasted for ‘disastrous’ negotiations

Speaking about the Withdrawal Agreement and the Political Declaration, shadow solicitor general Mr Thomas-Symonds said: “We have always been clear the two documents need to be taken together.

“The chicanery of this government in trying to separate them does them no credit whatsoever.

“The Government can seek to blame others as to why it can’t carry out the statutory approval process in its own legislation, but we are here today because this Government has manifestly failed on its policy over the last two years. The handling of the negotiation has been, frankly, disastrous.”

Mr Thomas-Symonds said the Prime Minister had had several opportunities to try to build cross-party consensus, but she had failed to do so. 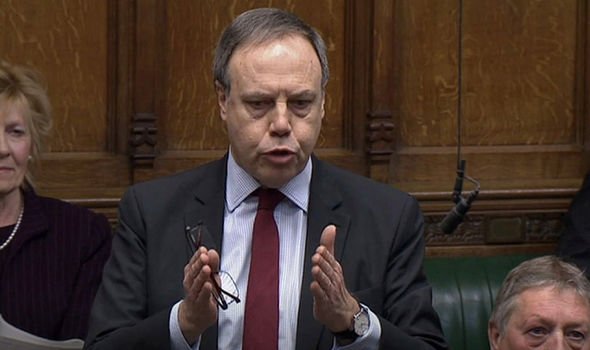 10.19am update: Deal is worse than ‘blindfolded Brexit’

Shadow solicitor general Nick Thomas-Symonds said MPs were being asked to vote on a proposition even worse than a blindfold Brexit.

The Labour MP for Torfaen said: “We used to say the Political Declaration was so vague it was a blindfold Brexit.

“But what we also now know, because the Prime Minister has made clear she intends to leave her office, is… the party opposite is asking us not only to be blindfolded but led into a different room by a different Tory prime minister.

“It’s a prime minister ultimately chosen by the Conservative Party members… It’s not in the national interest for the future of our country to be decided by a Tory leadership contest.”

Mr Cox said the Government would have accepted a Labour backbench amendment to give Parliament the power to set the negotiating mandate for talks on the future relationship but it was not selected for consideration by Mr Bercow.

Labour’s Gareth Snell, who was the lead name on the amendment, asked if the measures would be included in legislation to ensure the UK’s withdrawal from the EU.

Mr Cox replied: “We would have accepted his amendments.

“If it requires an amendment to that legislation, we’d obviously consider its detail carefully, but we’d be minded to accept such.” 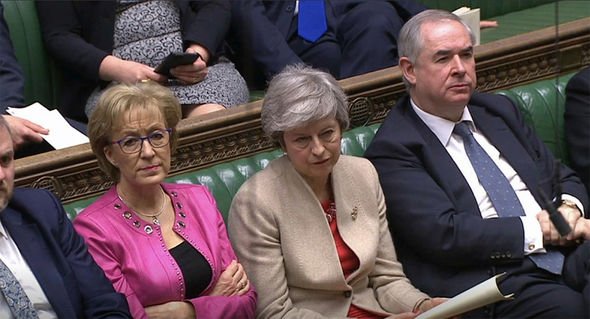 10.01am update: Barnier weighs in to Brexit vote

The European Commission’s chief Brexit negotiator Michel Barnier tweeted: “Important vote today in @HouseofCommons. As a reminder, approval of Withdrawal Agreement by 29 March will secure extension to 22 May, as per #Brexit #EUCO last week.”

9.51am update: UK could be forced to rely on goodwill of House

Mr Cox told MPs the UK would not be guaranteed a longer extension and the UK would have to “take a chance on the good will of the EU”.

He said: “This is the only right we have to an extension.

“If we move into next week without securing it then we take the chance that of those 27 leaders they will veto.

“The Government has taken the view it would have been wrong to allow that time and date to expire without giving this house the opportunity to consider whether it should avail itself of the legal right or whether it should move into a position where any further extension will be at the discretion of the 27 leaders.

“All negotiated exits from the EU will require this Withdrawal Agreement to have been approved.”

His comments come after Hilary Benn said it would be better for MPs to reject the Withdrawal Agreement today because it would allow them to seek a longer extension from April 12.

Mr Benn said it would be better to have the option of a lengthy extension rather than the deadline May 22. 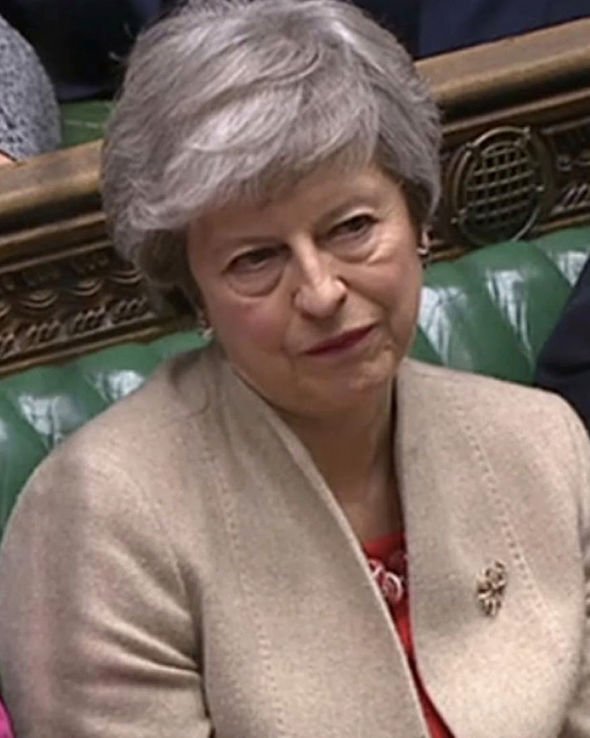 9.48am update: Political declaration is ‘subject to change’

Mr Cox said the motion acknowledges the political declaration is still “open to change” and that the EU has accepted it is open to change. He said the House is in the process of trying to find a “stable majority” for finding a solution in the future.

He said one option would be “to introduce the EU Withdrawal Implementation Bill, Agreement Bill, before this house”.

Mr Cox said the Government will introduce the bill within the next few days if today’s proposal is agreed.

Stephen Doughty MP accuses of Cox of misleading the House over the significance of holding the vote today.

But Mr Cox hit back telling the House had a “clear choice”, adding :approve the Withdrawl Agreement and secure its right to an extension, decline and know in doing so that by next week there will be no right to extension – any extension there will have to be some clear indication of part way forward and it is subject to the veto of those 27 member states.

He argued that voting through the deal would be “taking advantage of the right we have in international law”.

Mr Cox warned that “if we go to May 23 we would have to stand in European Elections”.

The Attorney General said we “have the opportunity to embrace certainty”.

Mr Cox said: “We put before the House the choice that the House faces today.

“What this choice will mean is that it will bring certainty to thousands of businesses and millions of individuals throughout this country, and to one million citizens of our country residing in the European Union.

“That is a not inconsiderable benefit. That certainty will be because, by taking the step of approving the Withdrawal Agreement today, it will set out a clear and certain pathway to our departure from the European Union.” 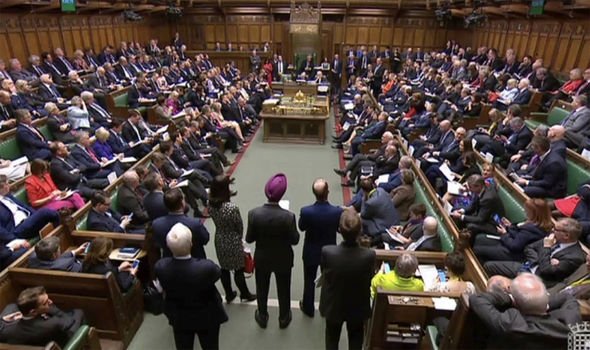 He said: ” “If this Withdrawal Agreement is not approved, then that extension will expire on April 11.

“That means that any other extension that this House might desire to be agreed by the union would be at its discretion, subject to the veto of 27 leaders.

“Therefore, by this evening, if the 11pm deadline expires and the agreement has not been approved, that legal right will expire with it.

“This is therefore the last opportunity to take advantage of our legal right.”

9.31am update: No amendments on Withdrawal Agreement

Speaker John Bercow told MPs he has not selected any amendments to the Government’s Withdrawal Agreement motion.