Theresa May’s Brexit withdrawal agreement was defeated by MPs in the House of Commons on Wednesday by 286 votes to 344. Following the result of the Commons vote, Europe Council President Donald Tusk called an emergency Brexit meeting on April 10, two days before the UK has to outline its next steps. Speaking on BBC News, Europe Editor Katya Adler warned EU leaders would clash over whether to offer the UK an extension – if that is what Britain demands.

She said: “I describe the sense here as one of resignation. And also defensiveness. The EU wanting to protect itself as much as possible from any future Brexit fallout.

“In the past in negotiations, the EU has used the threat of a no deal Brexit as part of those negotiations.

“Now, EU leaders think it is an increasingly likely prospect. That is what we heard from Emmanuel Macron of France today and that is why he and a number of EU leaders are now really questioning whether it makes sense to delay Brexit for that much longer.

“They look at all the divisions in Parliament, in Government, in Cabinet, and they wonder if the UK will ever unite around Brexit.” 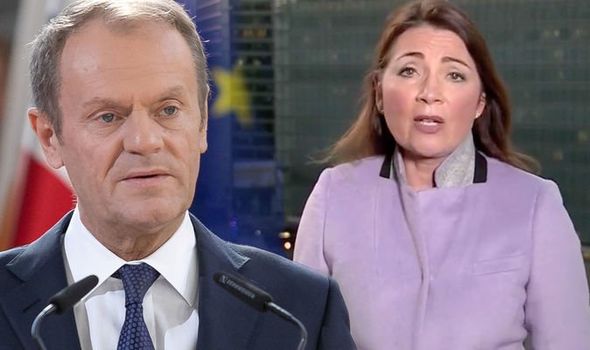 There will be a very heated discussion among the EU27 leaders

The BBC reporter added: “This is not to say that if the Prime Minister come to that emergency Brexit summit here on April 10, that EU leader’s would say ‘no’ to a longer extension.

“But, what it does mean is that when she leaves the room there will be a very heated discussion among the EU27 leaders as to whether to extend, how long for, and under what conditions.”

The UK now has until April 12 to find a solution moving forward, which could see Britain leave the bloc with no deal, or extending the Brexit process further.

Responding to the vote, European Council President Donald Tusk tweeted: “In view of the rejection of the withdrawal agreement by the House of Commons, I have decided to call a European Council on 10 April.”

Emmanuel Macron said the risk of a no-deal on April 12 was real. He said: ”At that moment, we will have to decide on the timeframe to implement (a no-deal exit) … and therefore we will accelerate the final phase of preparations.”

The Irish Taoiseach said it is up to the UK to indicate how it plans to proceed in order to avoid Britain crashing out of the EU.

In a statement, Leo Varadkar said: “The Government notes the decision of the House of Commons to reject the indicative Withdrawal Agreement. It is now up to the UK to indicate how it plans to proceed in order to avoid a no-deal scenario. The European Council has agreed unanimously that the Withdrawal Agreement will not be re-opened.”

Speaking in the Commons after her defeat, the Prime Minister warned it made the chances of the UK taking part in European elections “almost certain”.

She said: “The European Union has been clear that any further extension will need to have a clear purpose and will need to be agreed unanimously by the heads of the other 27 member states ahead of April 12.

“It is also almost certain to involve the UK being required to hold European parliamentary elections. On Monday, this House will continue the process to see if there is a stable majority for a particular alternative version of our future relationship with the EU. Of course, all of the options will require the withdrawal agreement.

“I fear we are reaching the limits of this process in this House. This House has rejected no-deal. It has rejected no Brexit. On Wednesday it rejected all the variations of the deal on the table, and today it has rejected approving the Withdrawal Agreement alone and continuing a process on the future. This Government will continue to press the case for the orderly Brexit that the result of the referendum demands.”