Home » Europe » Tusk heckled after outburst to Remainers ‘if UK doesn’t REPRESENT you, we will in Europe’

Tusk heckled after outburst to Remainers ‘if UK doesn’t REPRESENT you, we will in Europe’

The European Council President bemoaned concerned MEPs who have complained about British participation in the European Parliament elections in May as a result of a long Brexit delay. Mr Tusk, one of the last EU hopefuls of a British U-turn on Brexit, insisted the European Council’s proposal to delay Britain’s departure has left the door open to a second referendum or even Article 50 being revoked. Britain will now quit the EU on April 12 unless Theresa May can win the support of the Commons for her Brexit deal, which will then see Article 50 extended to May 22.

In an attack on MEPs critical of a long Brexit delay, Mr Tusk urged them to still consider British Remainers as “Europeans”.

Mr Tusk said: “Before the European Council, I said we should be open to a long extension if the UK wishes to rethink its Brexit strategy, which, of course, means UK participation in the European Parliament elections.

“There are voices saying this would be harmful or inconvenient to some of you. 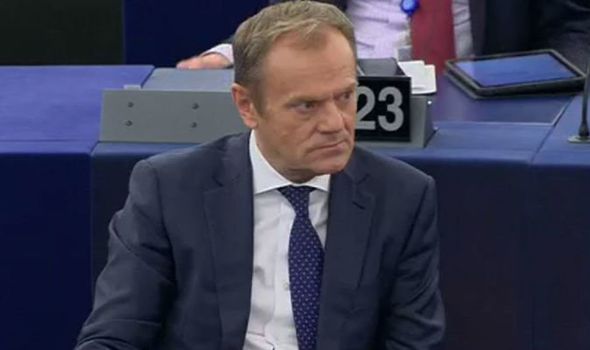 “You cannot betray the six million people who signed a petition to revoke Article 50.”

He also celebrated the “one million” who marched in London as part of a campaign for a second Brexit referendum.

Remainers in the UK “may feel that they are not sufficently represented by their UK Parliament, but they must feel they’re represented by you in this chamber because they’re Europeans,” he added.

Mr Tusk’s intervention produced huge heckles from Brexiteer MEPs across the chamber from him.

His fellow EU president, Jean-Claude Juncker, refused to discuss Brexit in his own address ahead of the so-called “indicitive votes” in the House of Commons tonight.

The European Commisison chief said: “I will say nothing on Brexit. It has all been said.”

He added: “If I were to compare Britain to a Sphynx, the Sphynx would be an open book by comparison, and let’s see how that book speaks in the next week or so.”

Today MPs will vote on a range of Brexit plans in a bid to find Commons majority for Britain’s EU divorce.

Tory MP Sir Oliver Letwin, with the support of cross-party group of MPs, will seize control of the Commons agenda from the Government at 2pm.

MPs will be asked to review a series of strategies, including a second referendum or cancelling Brexit, to see if there Commons support for an alternative to Mrs May’s deal.

High-profile Brexiteers are beginning to throw their support behind the Prime Ministers deal amid fears that Britain could end up remaining in the EU if her deal is defeated once more.

ERG leader Jacob Rees-Mogg has claimed he will make a dramatic U-turn to back the Prime Minister but only if the Democratic Unionist Party do the same.

Mr Rees-Mogg asked:“Is this deal worse than not leaving?

“No, definitely not. If we take this deal we are legally out of the EU . . . It restores our independence.”

Boris Johnson appeared to soften his position after admitting there is an “appreciable risk” that Brexit is abandoned.

“If we vote it down again there is an appreciable and growing sense that we will not leave at all. That is the risk,” he told a Daily Telegraph event.

“If people like me are to support this then we need to see proof that the second phase of the deal will be different to the first.

“I want to see some sign that the vision which the British people came to in 2016 will pass.”