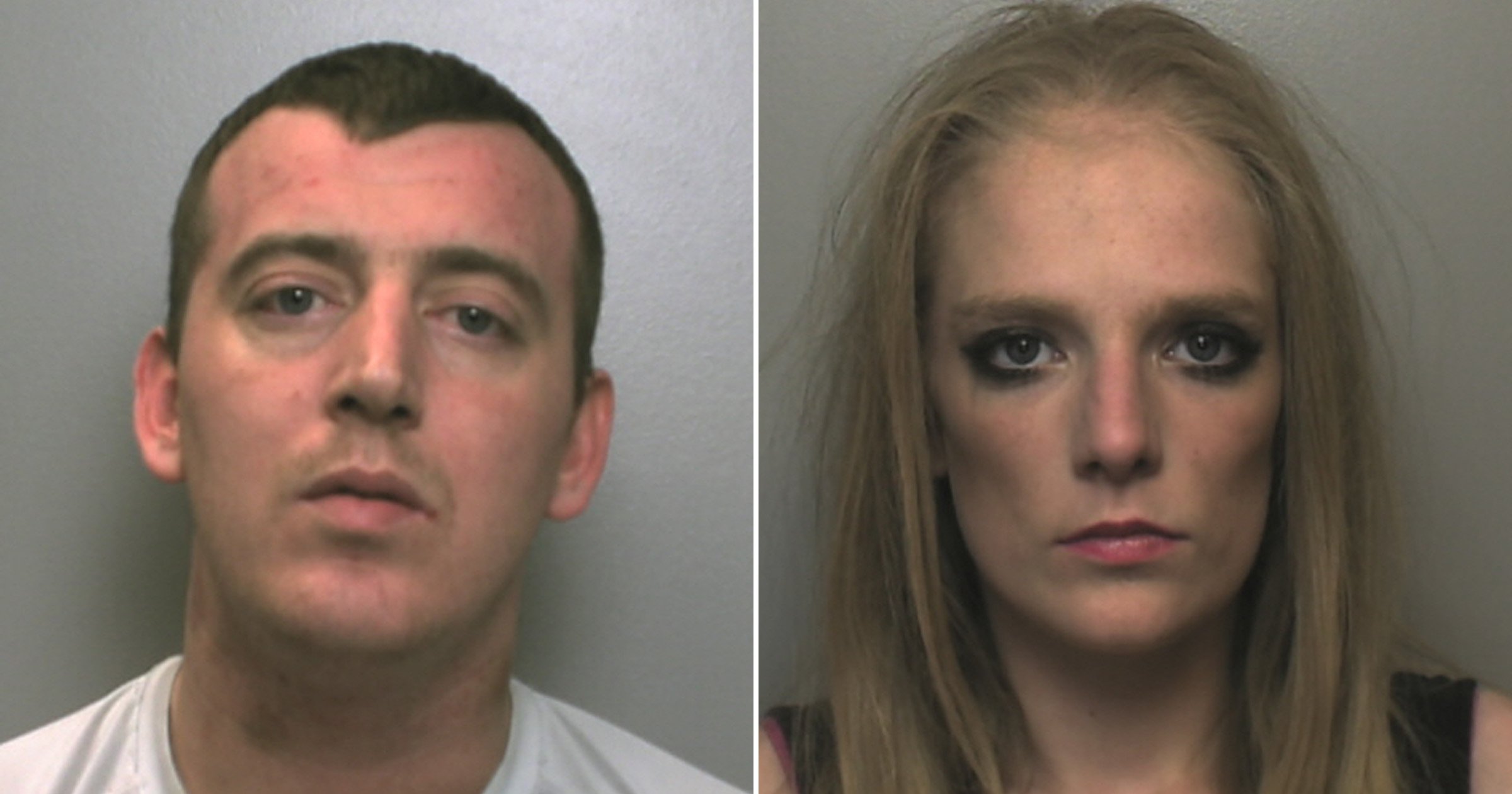 A pair of thugs who shot a woman in the head with a pellet gun and bashed her with a bong before robbing her have been sentenced.

Stephanie Bartlett, 25, kicked the victim in the stomach and face during a violent robbery on November 14, 2021.

She struck the woman in the head with a bong, shattering it before Kevin Davies, 32, used a shard to stab the victim’s thigh and shoulder.

They both pulled out a pellet gun and fired shots at the victim, with one left lodging in her head.

Before stealing the victim’s jewellery, phone, cash and notebook filled with passwords, the pair threatened to inject the woman with an overdose of heroin and bury her under a patio.

Stoke-on-Trent Crown Court heard how the victim was a drug user who visited an address in Shelton to buy drugs at around 9pm.

She brought a batch of bongs to exchange for monkey dust, a class B drug otherwise known as cathinone.

Prosecutor Nick Tatlow said: ‘Three people including the two defendants arrived. The victim recognised Bartlett and knew “Kev” but not his second name.

‘Bartlett attacked the woman kicking her to the stomach and face. She made her remove her jewellery, rings and earrings, took her bag, got the phone and the purse containing £30, a bank card and a notebook with passwords.

‘Bartlett hit her over the head at least three times with a large bong. She did so with such force she broke the bong.

The victim had no idea why she was set upon, Tatlow told the court, and the third man present played no part in the attack.

‘The defendants produced a pellet gun and started to shoot the woman. She was hit by several pellets and one lodged in the back of her head,’ he added.

‘The defendants also threatened to inject the terrified woman with heroin and put her under a patio.’

When the barrel of the pellet gun was aimed at her, the woman was fearful she would never see her children again, Tatlow added.

Left with a scar on her shoulder, the victim was taken to an address and stayed overnight – she went to the police and the hospital the day after.

The woman remains rattled by the attack and now constantly looks over her shoulder.

Barlett, of Longport, pleaded guilty to robbery and possession of an imitation firearm.

Davies, of Ball Green, pleaded guilty to causing grievous bodily harm with intent and possession of an imitation firearm.

Barlett’s defence argued his client was remorseful of the incident and ‘struggles to understand how it all got so out of hand’.

Barry White, mitigating, said: ‘Her parents have always had a drug-fuelled lifestyle and been in and out of prison.’

‘He believes that is where his drug and drink problems have stemmed from,’ Davenport said.

‘He had taken monkey dust. That is why he behaved the way he has. He says he was an idiot and he wishes he could turn back the clock.’

Recorder Julian Taylor said: ‘She was threatened she would be injected with an overdose of heroin and put under the patio. The assault was prolonged and persistent.

‘The robbery had already taken place when Davies joined in. This was a very serious matter.’

Davies has been jailed for seven years and two months while Bartlett was sentenced to five years and four months.

Both defendants were blocked from ever contacting the victim as part of an indefinite restraining order.