Theresa May will be joined by German Federal President Frank-Walter Steinmeier in laying a wreath during the ceremony.

They will both also attend a special service at Westminster Abbey later that day.

It will come after the prime minister travels to Belgium and France during Armistice commemorations. During Mrs May’s visits, she will lay a wreath at the graves of John Parr, the first UK soldier to be killed in 1914, and the last, George Ellison, who was killed at 9.30am before the Armistice became effective at 11am.

By coincidence, they are buried opposite each other at the Belgian cemetery.

“Next week will mark one of the most significant moments in our nation’s history,” Mrs May said.

“One hundred years after the guns fell silent on the Western Front, each and every one of us can pause to reflect on the immense sacrifices that were made by so many.

“The killing fields of France and Belgium are scarred by the horrors of war, but the strength and closeness of our relationship today is a testament to the journey our countries have travelled together. 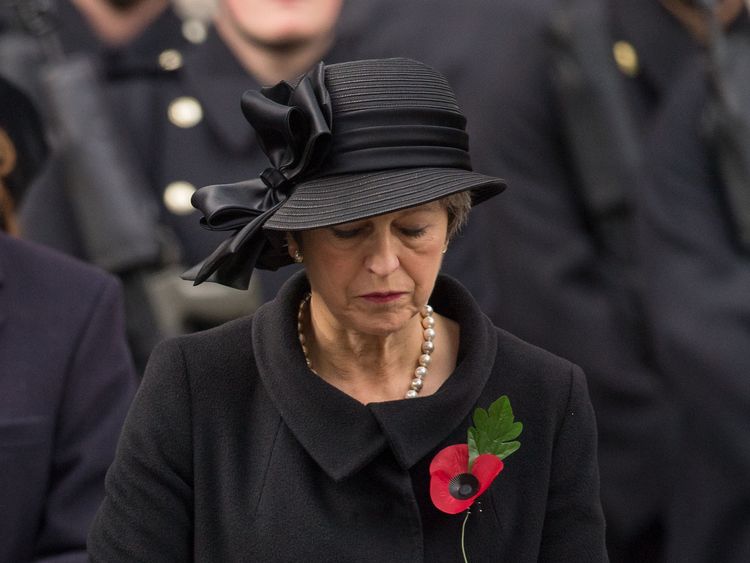 “I’m proud to represent the immense gratitude of our nation at these commemorations and share these moments of reflection with our friends and partners in Europe.”

The prime minister’s programme also includes a visit to the St Symphorien Military Cemetery in Mons in Belgium on Friday.

She will travel on to France and will meet President Emmanuel Macron in Albert, an historic town at the heart of the Somme region, which suffered significant bombing during the First World War.

“The visit will give the two leaders the opportunity to reflect on the unique shared history between our two countries and the importance of the Centenary,” a statement from 10 Downing Street said.

The pair will attend a working lunch before taking part in a wreath laying ceremony at the Thiepval Memorial, which bears the names of more than 72,000 officers and forces who died in the battle.

A special wreath will be created combining poppies and le bleuet, the two national emblems of remembrance for Britain and France.

On Saturday evening, the PM will attend The Royal British Legion (RBL) Festival of Remembrance at the Royal Albert Hall along with the Royal Family.

At PMQs this week the prime minister said: “What Armistice gives us is an opportunity to come together to remember the immense sacrifices made in war, but also to join with our German friends to mark reconciliation and the peace that exists between our two nations today.”