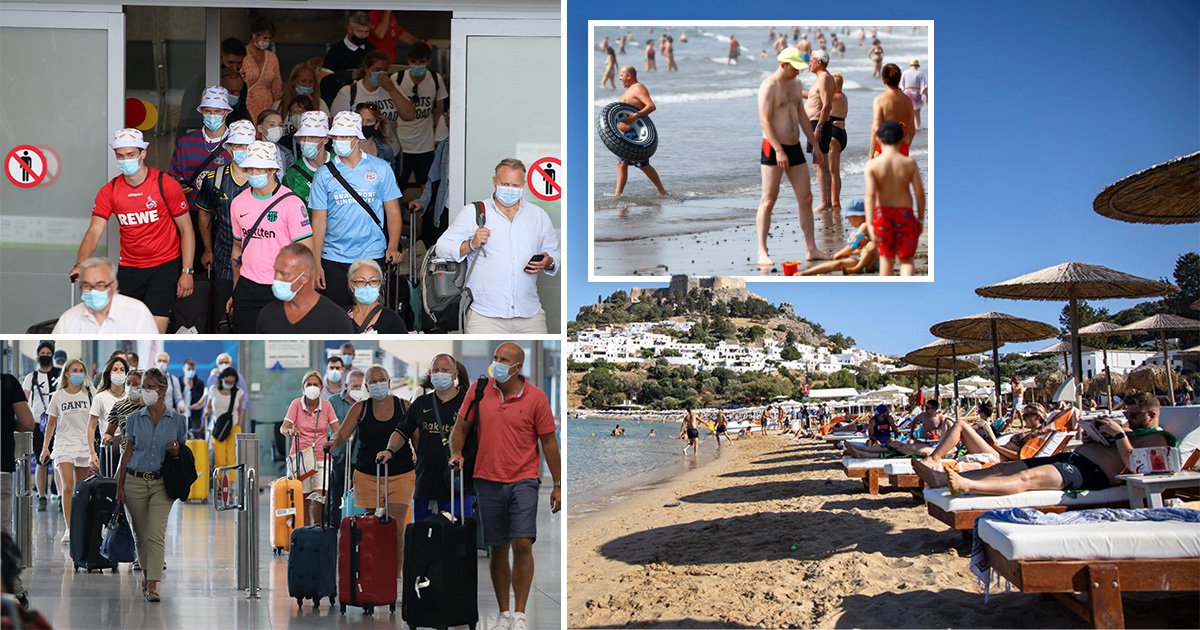 Fully vaccinated Brits could soon have to quarantine when coming back from Greece or Spain as Covid cases continue to rise in both countries.

It follows new rules meaning France will be excluded from a system allowing double-jabbed people to skip isolation upon returning from amber list destinations as of yesterday.

The Government made a last-minute decision on Friday, causing chaos for thousands of holidaymakers, amid concerns of the Beta variant first identified in South Africa.

Wales and Scotland and Northern Ireland have all followed Downing Street in its new rules for double vaccinated travellers and the exemption for France.

Now it is feared Spain and Greece will be added to what has been dubbed the ‘amber plus list’.

It means people returning from either country would have to isolate at home for 10 days, even if they have had both jabs.

Cases of the Beta variant are low in the UK, compared to the dominant Delta variant first identified in India.

But ministers are worried the strain could be ‘reseeded’ by people returning from other European countries.

There are also unanswered questions over how effectively the variant can resist vaccines.

Covid infections have been soaring in Spain, with an all time-high of 44,000 cases on July 13.

A recent spike in Greece saw daily cases hit 2,800, leading to fresh curfews and bans on music in bars, and restaurants, in Mykonos.

EU health officials say the Beta variant makes up 4% of cases in France, compared to more than 13% in Greece and 21% in Spain.

Infectious diseases expert at UAE, Professor Paul Hunter said it was ‘bizarre’ to see France added to the amber plus list first as Spain and Greece ‘seem to have rather more cases than France’.

He told MailOnline: ‘I personally cannot see a real or valid public health reason for doing it. Even if the Beta reduces protection given by the vaccine, the jab still prevents severe cases and deaths.

‘I think the Government has taken a reasonable approach up to now. But if you go to France or Spain, you are more likely to be positive than the guy who checks your passport.’

‘I can’t see any value of having France or any other country on the amber plus list solely on the prevalence of variants. In terms of controlling infectious variants, the horse is gone.’

Travel commentator Paul Charles told the Sun: ‘We’re seeing quarantine introduced by stealth again, as countries are picked off one by one, as they were last summer.

‘We seem to have made little progress in terms of creating a long term solution to help consumers travel overseas, especially if they’ve been double jabbed.

‘Any quarantine moves such as against Spain would have a major impact on livelihoods and jobs in the travel sector, and cause enormous financial distress to consumers.’