Radio caller reveals how he saved house from blaze

As temperatures topped 40C in the UK for the first time ever, as the sweltering heat fuelled hundreds of fires and widespread transport disruption. For parts of the UK, the searing temperatures come on top of months of below-average rainfall, leaving conditions tinder-dry and putting most of England at “exceptional” risk of wildfires, with fire crews battling hundreds of blazes around the country. Caller Chris from Newmarket revealed how he spotted the beginning of a fire using a doorbell camera.

“She rang me yesterday afternoon to say the house behind her house caught fire and she could hear the gas cylinders popping and banging.

“The police came around and evacuated everyone.

“She told me where she had been evacuated to so my wife could go pick her up. 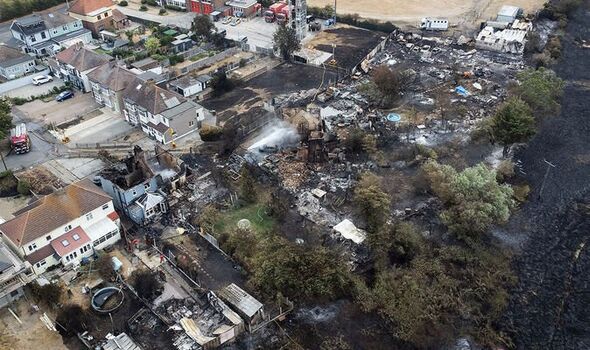 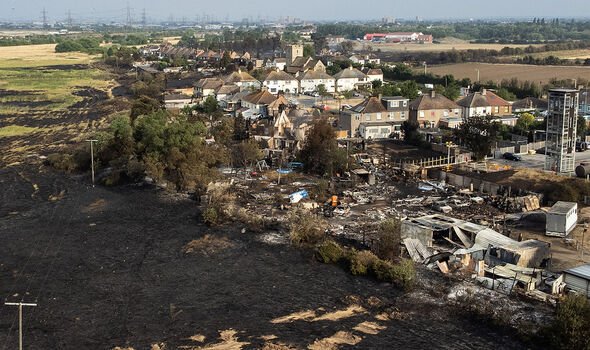 “When she was at our house, we were watching on the Ring cameras around the house, we saw the houses in front of her burn.

“We saw am ember land in the front garden and start a fire on the grass.

“At which point we were able to contact the Fire Brigade to warn them because obviously, all their guys were focusing on the house that was burning.

“We managed to get them to come over and her front garden out before her house caught alight as well.”

The London Fire Brigade endured its busiest day since World War Two on Tuesday as firefighters worked through the night to damp down wildfires.

Trains running from London up the east coast of England were cancelled at least until midday on Wednesday after a fire near the city of Peterborough in central England damaged signalling equipment. Other fires on the network damaged tracks and overhead lines.

London Mayor Sadiq Khan praised the work of the fire brigade after it received 2,600 calls for help, compared with a normal daily average of 350. 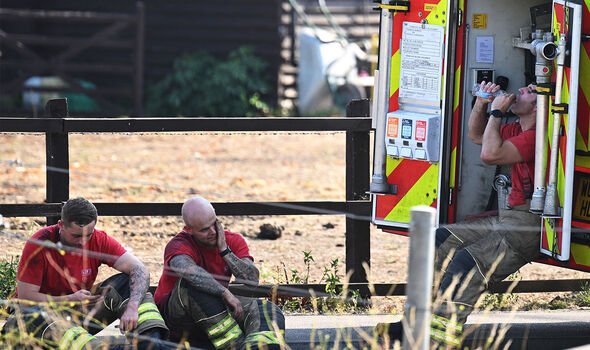 “The problem is we’ve not had rain in the entire month of July in London,” Kahn told BBC Radio. “The grass is like hay, which means it’s easier to catch fire and once it catches fire it spreads incredibly fast.”

On Monday, Essex County Fire and Rescue Service received three times its average number of calls, driven by wildfire reports, while a blaze at Lickey Hills Country Park near Birmingham, spread to around 50,000 square metres and forced 15 people to flee their homes.

London Fire Brigade (LFB) declared a major incident on Tuesday as it warned it was battling “several significant” incidents in the capital, with people urged not to have barbecues or bonfires due to the “unprecedented” challenge fire crews faced.

Around 100 firefighters tackled a blaze in the village of Wennington, east London, on Tuesday afternoon, with television footage showing black smoke billowing into the air, with buildings and fields on fire.