Rwanda farce: Kigali admits it has space for just 200 migrants as UK forks out £120m bill 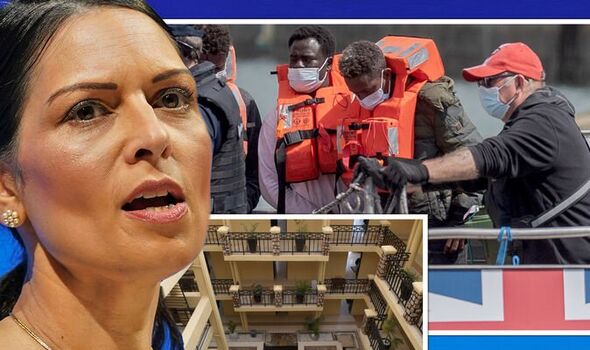 Rwandan government spokeswoman Yolande Makolo said officials have identified “several other accommodation facilities” within and around the capital to ramp up the number of beds – if needed.

Currently, the only place set up to accommodate migrants sent to Rwanda is the Hope Hostel in the heart of Kigali.

Asked by reporters how many migrants the Rwandans can currently take in, Ms Makolo admitted it is “a couple of hundred”.

But she insisted: “With a capacity to upscale pretty quickly. We will have visibility of who is coming and when, so we will be able to adjust and confirm the kind of accommodation that we need for the numbers.”

She said the country will be ready to receive “thousands in the lifetime of this partnership” and can “scale up very quickly”.

The Government’s plan to send illegal migrants to Rwanda has been grounded by legal challenges from lawyers and campaigners.

But the Rwandan government revealed Britain has already paid Kigali £120 million to take migrants despite the deal being grounded by legal challenges.

Officials for the east African nation’s government confirmed it has received the entire initial payment for the agreement signed in April.

Last month Downing Street conceded that some cash had been paid but refused to say how much or when this had happened, saying the information was “confidential”.

The first deportation flight was grounded in June after a series of legal challenges and another attempt is yet to be scheduled.

When asked by the Daily Express how much money had already been paid by the UK, Ms Makolo said: “There was an initial transfer of £120 million. This has already been paid and we are already using the funds to prepare.”

And she revealed part of that cash injection has already been spent – preparing for migrants yet to arrive.

Rwandan officials also conceded they will not be able to stop migrants leaving the country and attempting new journeys back to the UK.

Doris Uwicyeza Picard, the country’s lead negotiator, said: “Everybody who wishes to leave can leave.”

“We also have mechanisms in place to ensure safe relocation to their country of origin or any other country where they would have a right to residence.”

Ms Makolo said Rwandan officials “do not consider living in Rwanda a punishment or something bad, I don’t see why anyone would”.

She added: “People have their own reasons for going to different places.”

“Part of the reason people think they should be living in Europe or richer countries is that they think the streets are paved with gold and part of the reason is this narrative which is cast by different media that Africa is basically a hellhole, it’s presented as a terrible place to live, which isn’t true.”

Government spokeswoman Ms Makolo added that legal challenges against Home Secretary Priti Patel’s plan were expected and Rwanda expects the UK government “to do what needs to be done to overcome this challenge”.

“On our side, we remain ready to receive the migrants, we are using this time to prepare and we’re confident that it will go ahead,” Ms Makolo added.

“We will work with our partners in the UK government to make sure this partnership benefits the migrants and we are able to give them a home here and help them take care of themselves, and also use the partnership to advance our development programme for the benefit of Rwandans and anyone else who comes to live here with us.”