Home » Europe » Rees-Mogg admits key MISTAKE after being ‘outmanoeuvred’ by May – ‘Happy to be enslaved?’

Rees-Mogg admits key MISTAKE after being ‘outmanoeuvred’ by May – ‘Happy to be enslaved?’

Jacob Rees-Mogg was quizzed about being “outmanoeuvred” by the Prime Minister as he admitted his Brexit mistake during an interview on Channel 4 News. Presenter Cathy Newman quizzed the Chairman of the Conservative Party’s European Research Group about some of his comments made about the Prime Minister’s withdrawal agreement after suggested he could back the deal. Newman asked the Conservative MP for North East Somerset if he was “happy to be enslaved” and whether he would “apologise” to the British public.

Jacob Rees-Mogg did admit that he had made a crucial “mistake” thinking Britain’s departure was set for March 29, 2019.

Newman said: “I just want to read you a couple of things you have said about her deal before.

“You said her Brexit deal is dreadful. The Brexit we are getting with the withdrawal deal is not a proper Brexit. Nothing is going to be worse than what we have been offered.

“You said it is not so much the vessel state anymore, it is the slave state. Are you happy to be enslaved now?” 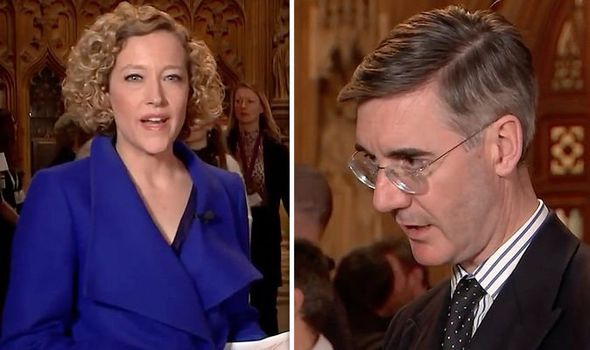 Mr Rees-Mogg replied: “I have said all of that and I stand by all of that. I don’t like the deal at all but at least we would have legally left the European Union, as opposed to remaining in.”

The Channel 4 News host asked if Mr Rees-Mogg had been “outmanoeuvred” by the Prime Minister. Newman said: “She has stubbornly kept going on and on and you have had to fall into line.”

Mr Rees-Mogg said: “You may put it that way but the choice we face was going to between no deal and her deal until a few days ago.

“The Prime Minister said 100 times from the dispatch box and other places we were going to leave on the 29 March, I made the mistake of believing that statement was a reliable statement of fact.”

You said it is not so much the vessel state anymore, it is the slave state

Mrs May spoke with the influential Conservative 1922 Committee shortly before MPs were due to take part in crucial votes to outline the next steps for the UK if the Prime Minister’s deal is rejected in the Commons.

The Prime Minister said she “will not stand in the way” of the party having new leadership.

She said: “I am prepared to leave this job earlier than I intended in order to do what is right for our country and our party.”

Downing Street had suggested the Prime Minister is keeping the open possibility of returning her withdrawal agreement to the Commons on Thursday or Friday if she feels it has a credible chance of passing.

Speaking to her MPs, Mrs May said: “I have heard very clearly the mood of the parliamentary party. I know there is a desire for a new approach – and new leadership – in the second phase of the Brexit negotiations – and I won’t stand in the way of that.

You said it is not so much the vessel state anymore, it is the slave state

“I know some people are worried that if you vote for the Withdrawal Agreement, I will take that as a mandate to rush on into phase two without the debate we need to have. I won’t – I hear what you are saying. But we need to get the deal through and deliver Brexit.”

But, on Wednesday evening, the Prime Minister was dealt a huge blow after the DUP said they could not back Mrs May’s deal.

The Democratic Unionist Party announced that it will not support the Government if it tables a fresh meaningful Brexit vote because “the necessary changes we seek to the backstop have not been secured”.