Princess Anne, 70, carries out hundreds of royal engagements every year and is much respected for her tireless dedication to the Crown. Now in her seventh decade, the Princess Royal shows no sign of slowing down and her packed royal schedule was promoted by the Royal Family earlier this week.

Unlike future King and Queen, Prince William Kate, Duchess of Cambridge, Princess Anne does not have her own social media profile.

In fact, the royal has previously spoken about her disdain for Twitter.

Anne turned 70 on August 15, 2020, and an ITV documentary, Anne The Princess Royal At 70, gave a behind the scenes look at the busy royal’s life.

In the programme, Anne said: “I wouldn’t go anywhere near Twitter if you paid me.” 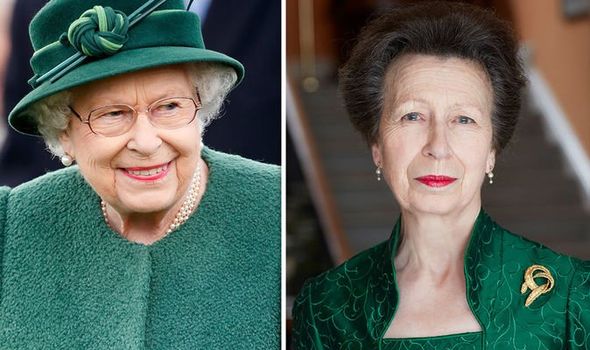 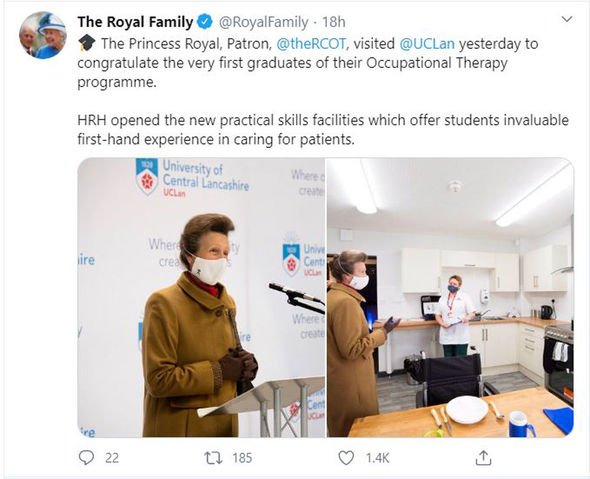 Nonetheless, the Royal Family has an official Twitter account it uses to promote Queen Elizabeth II’s work as well as that of less senior royals.

From visiting a university to honouring her longstanding ties to Riding For the Disabled charity, the Royal Family’s series of tweets showed Anne had been non-stop in recent days.

The first tweet showed two photos of Anne at the University of Central Lancashire where she congratulated students graduating from its Occupational Therapy Programme. 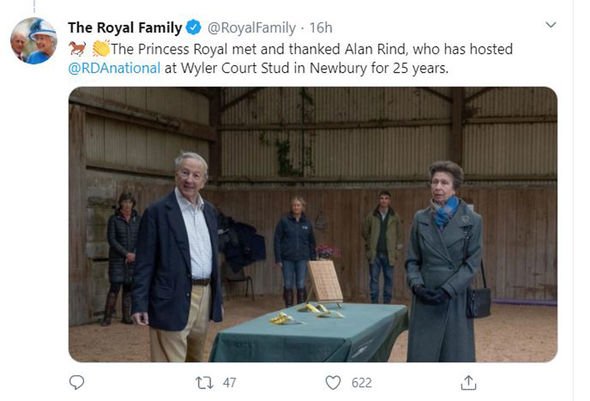 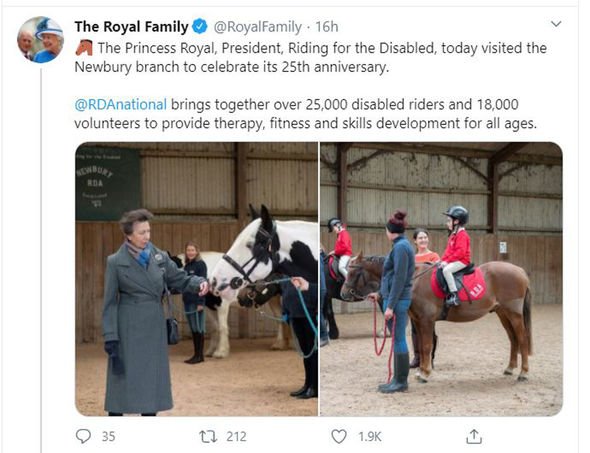 @UCLan yesterday to congratulate the very first graduates of their Occupational Therapy programme.

The second tweet showed Anne at a stud in Newbury which has been running a Riding for the Disabled programme for 25 years.

The tweet read: “The Princess Royal met and thanked Alan Rind, who has hosted

@RDAnational at Wyler Court Stud in Newbury for 25 years.”

The third tweet showed Anne meeting horses at the Newbury study as well as children participating in the Riding for the Disabled programme.

The tweet read: “The Princess Royal, President, Riding for the Disabled, today visited the Newbury branch to celebrate its 25th anniversary.”

“@RDAnational brings together over 25,000 disabled riders and 18,000 volunteers to provide therapy, fitness and skills development for all ages.”

Finally, the Royal Family shared photos of Anne on a school visit in Amesbury where she opened a new primary school.

Princess Anne was one of the first royals to get back to face to face engagements as soon as lockdown ended.

She lives in Gloucestershire on the Gatcombe Park Estate and both her children – Zara Tindall and Peter Phillips live nearby.

Despite being one of the hardest-working members of the firm, Anne chose not to give her children titles. 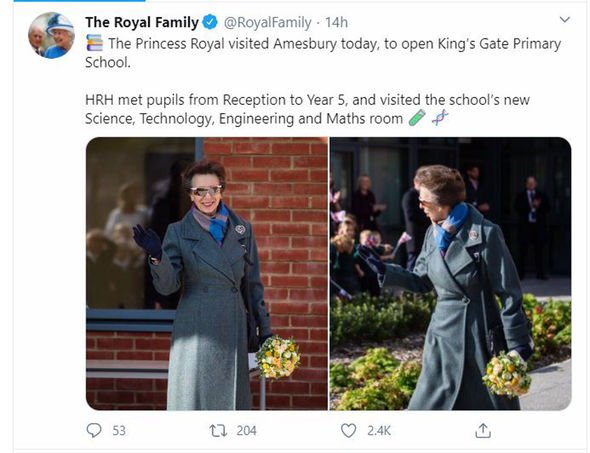 She touched on her decision to raise Zara and Peter as private citizens in a rare interview earlier this year.

Anne told Vanity Fair: “I think it was probably easier for them, and I think most people would argue that there are downsides to having titles.”

She added: “So I think that was probably the right thing to do.”

Anne told Vanity Fair: “I think it was probably easier for them, and I think most people would argue that there are downsides to having titles.”

She added: “So I think that was probably the right thing to do.”