William and Kate rarely tweet from their official Duke and Duchess of Cambridge Twitter account as it is largely run by their press and social media teams.

However, when the second in line to the throne does tweet it is usually about football or rugby.

A massive Aston Villa fan William will be undoubtedly thrilled his team one of the first teams to play as the Premier League restarts tonight.

Aston Villa plays Sheffield United at 6pm, however, spectators have been limited to around 300 people in the stadium. 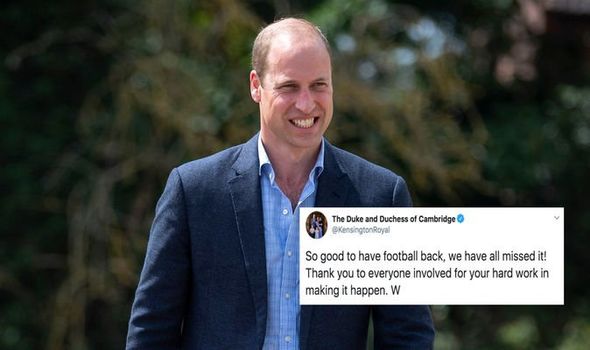 Manchester City and then play Arsenal at 8.15pm tonight.

One Twitter replied: “Don’t know why, but the initial “W” looks and sounds very regal and King-like!”

While others just responded with variations of “hello William”.

JUST IN: Queen heartbreak: Her Majesty head in hands as horse beaten at Ascot

Another fan wrote with a lion emoji: “Go Villa!”

Prince William conducted his first in-person royal engagement since the lockdown began with a visit to the King’s Lynn Ambulance.

The Duke of Cambridge praised ambulance staff who have been working on the frontline of the coronavirus pandemic and joked about the one thing he’s missed most during lockdown.