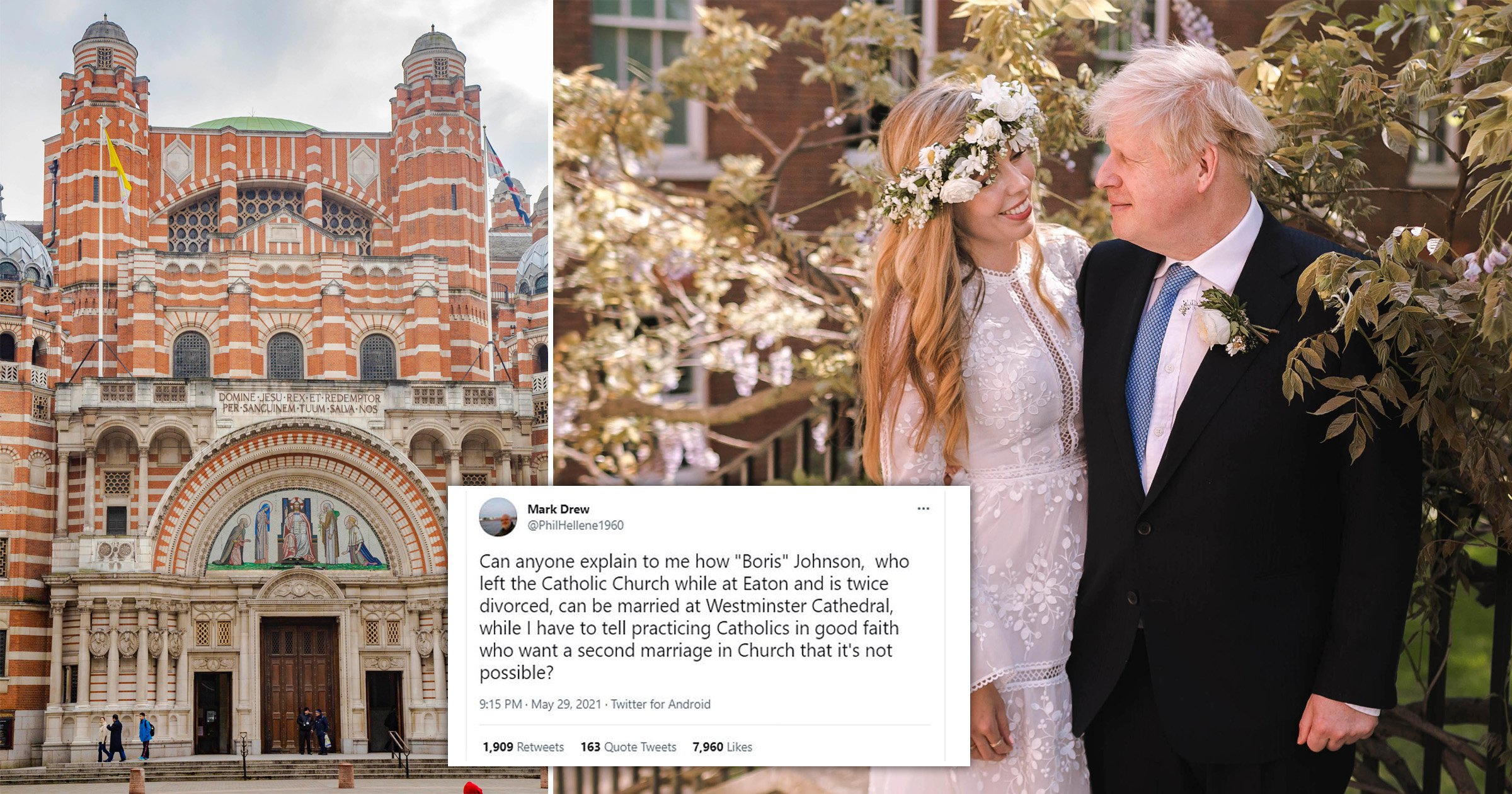 Disgruntled Catholics have questioned why the twice-divorced prime minister was allowed to remarry in a church.

Boris Johnson and Carrie Symonds got married at a private ceremony yesterday at in front of a handful of family and friends at Catholic Westminster Cathedral.

But some have demanded to know why the PM, who was previously married to Allegra Mostyn-Owen for six years, followed by a 27-year marriage to Marina Wheeler was able to remarry in the church.

Catholic canon law does not allow a divorcee to remarry in the church if their former spouse is still alive.

Churchgoers said they were ‘confused’, while Catholic priest Father Mark Drew shared his frustration on Twitter after having to deny his own divorced congregants the opportunity to remarry in church.

He wrote: ‘Can anyone explain to me how “Boris” Johnson, who left the Catholic Church while at Eaton and is twice divorced, can be married at Westminster Cathedral, while I have to tell practicing Catholics in good faith who want a second marriage in Church that it’s not possible? [sic]’

However, neither of Mr Johnson’s last weddings were Catholic ceremonies and could be seen as invalid in the eyes of the church, meaning yesterday’s marriage is technically his first.

Matt Chinery, an ecclesiastical and canon lawyer, told Times Radio: ‘There is a requirement if you are a Roman Catholic that you must have your wedding overseen by a Roman Catholic priest or deacon.’

He explained that any other form of marriage ‘is not valid unless you had previous permission from your bishop to marry outside of the Catholic church’.

The PM was baptised as a Catholic but was later confirmed as an Anglican while at private school Eton.

Mr Chinery explained: ‘What I think has happened here is that the Catholic church has looked at Boris Johnson’s first two marriages (and) seen that he’s a Roman Catholic by baptism.

‘They’ve looked at that, said “you are a Catholic because you were baptised Catholic, your first two weddings weren’t in a Catholic church overseen by a Catholic minister therefore the Roman Catholic church does not recognise those two marriages as valid”.’

He added: ‘So in the eyes of the Catholic church Boris Johnson woke up last week as somebody who wasn’t married and had never been married and so was free to marry in the cathedral this weekend.’

Catholic writer Catherine Pepinster echoed Mr Chinery’s comments and pointed out that the prime minister’s previous weddings were ‘in non-Catholic settings’ so the church did not recognise them.

‘As far as the church is concerned, this is his first marriage,’ she told the Mail on Sunday.’

She added: ‘The others don’t need to be annulled. They didn’t happen, according to Roman Catholic canon law.’

Mr and Mrs Johnson threw a small reception in the garden of No 10 Downing Street following the wedding at the cathedral.

Even senior Downing Street aides were totally unaware the couple were about to tie the knot on Saturday, reported The Sun.

They were understood to have been married by Father Daniel Humphreys, who had given the couple pre-marriage instructions and baptised their son Wilfred last year.

Shortly after 1.30pm, the cathedral was reportedly suddenly cleared of visitors, with staff saying it was going into lockdown.

Half an hour later, a limousine carrying the bride swept into the piazza outside the main west door.

The couple announced their engagement – together with the news that they were expecting their first child – in February last year.