Home » Americas » Sure, It’s Raining. But It’s Still the Start of Summer in New York City.

Sure, It’s Raining. But It’s Still the Start of Summer in New York City.

The sea gulls outnumbered the beachgoers waiting to scarf down Nathan’s Famous hot dogs on the Coney Island boardwalk in Brooklyn.

The baseball diamonds were damp and silent at Inwood Hill Park in northern Manhattan as park workers swept away puddles.

And the souvenir for visitors at a popular landmark in Queens? A Covid vaccine shot.

It was the unofficial start of summer as the city slowly recovered from the pandemic, with the test positivity rate falling below 1 percent and the ranks of the vaccinated swelling. But the Memorial Day weekend, marred by bouts of rain and cold weather, did not quite live up to the big celebration that many New Yorkers had hoped for this year.

Central Park, which would usually be packed with holiday crowds, was largely deserted Sunday morning except for a handful of joggers, dog walkers and tourists who had the vast green expanse to themselves.

Still, some New Yorkers were determined to make the best of the soggy weekend — if only to mark how far their city, once an epicenter of the pandemic, has come back.

With no outdoor barbecue to go to with their friends, Alex Mohabir and Vanessa Heredia, both 26, headed out for a quiet stroll near their home on Saturday through the lush gardens of Fort Tryon Park in northern Manhattan.

Across the city, there were inescapable reminders that the pandemic was not yet over. At the Unisphere, a huge steel globe in Queens, Sung Mo Yang, 19, and two friends from high school snapped photos in their masks, alongside tents where health workers gave free Covid vaccine shots.

Though it all looked a bit bizarre, Mr. Yang said, “It’s slowly getting back to normal, you can definitely see the finish line.”

Not even the occasional downpour — or the losing record of the Brooklyn Cyclones — could dampen the spirits of hard-core baseball fans in knit hats and gloves who lined up by the hundreds on Saturday afternoon for the team’s home game at Maimonides Park in Coney Island. An incentive was a bobblehead of Jacob deGrom, the Mets pitcher, for the first 100 people.

“I am just excited that I get to see baseball again,” said John Harvey, 7, who was 16th in line beside his dad, Sean, and went home with a bobblehead. 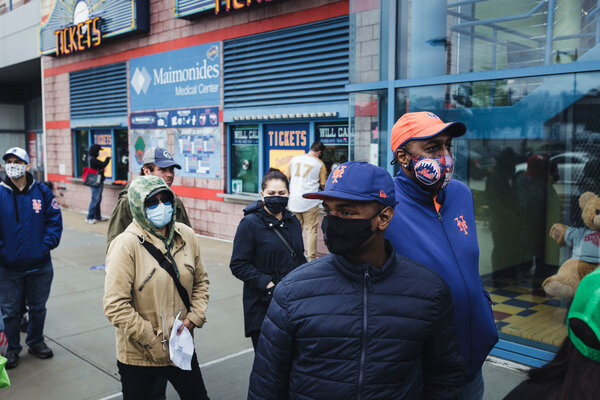 Lance Neil, 42, brought his son from the Bronx for their first Cyclones game of the season. “When you come out here, it’s like going on vacation,” Mr. Neil said. “It’s like a piece of heaven.”

In Manhattan, martial arts students were practicing their kicks in a corner of Washington Square Park on Friday afternoon while picnickers staked out prime spots nearby, and a group of would-be sunbathers sprawled topless on a blanket.

As the rain moved in, parkgoers were reluctant to leave and huddled under umbrellas or sought shelter under the marble Washington Arch.

“I think people are just comfortable talking to people again or just experiencing other people,” said LeeAnn Cardwell, 24, who lives in Texas and came to New York to visit a friend.

A few blocks way in the West Village, Brenna Guyette, 26, decided on the spur of the moment to grab a drink at a bar with her friend Liz O’Sullivan, also 26, to kick off what they described as their “summer of yes.”

“I’m just ready to go out, have a good time, and meet people,” Ms. Guyette said.

“We don’t know what our plan is going to be,” added Ms. O’Sullivan. “But we know we’re going to do stuff together.”

Last Memorial Day weekend, Luis Lema, 48, a handyman from Ecuador, said he was stuck at home in Philadelphia for the first time in more than a decade instead of being surrounded by his large extended family at their traditional barbecue in the park.

This year, Mr. Lema was at the barbecue with his 7-year-old daughter. “Now we have more food, more people,” he said. “It’s looking good.”

In nearby Jackson Heights, the regulars at Cassidy’s Ale House were back on their stools. Vinny Conroy, 72, and Pat McBride, 78, retired New York police officers, were content to sit with their bottles of Coors and reflect on the meaning of Memorial Day — remembering those who gave their lives in military service.

“Last year, especially in New York City, everybody was more watching the hospitalizations and the body count, rather than remembering what they were supposed to remember,” Mr. Conroy said.

Anne Butler, 55, whose family owns the ale house, recalled that they were barely hanging on last year. They had to lay off their staff and offer takeout just to stay in business.

Many people said they welcomed the return of the familiar rhythms of the city that they feared had been lost. Roger Molina-Vera, 37, picked up with his prepandemic routine of brunch with friends at Cookshop in the Chelsea neighborhood of Manhattan.

“This is the first boozy brunch we’ve really had in a long time,” said Mr. Molina-Vera, a pink mezcal cocktail in hand as he waited for huevos rancheros on Saturday.

Still, he acknowledged, “to try to do the same things I was doing before the pandemic doesn’t feel like growth to me.”

Chase Campbell, 21, said the pandemic had made him more eager to go out and try new experiences — now that he finally could again. So Mr. Campbell and three friends took a break from browsing at antique shops on Saturday to sample the wares at a Chinese tea stall.

“There’s so much I missed out on,” Mr. Campbell said. “It’s important we make the most out of every day.”