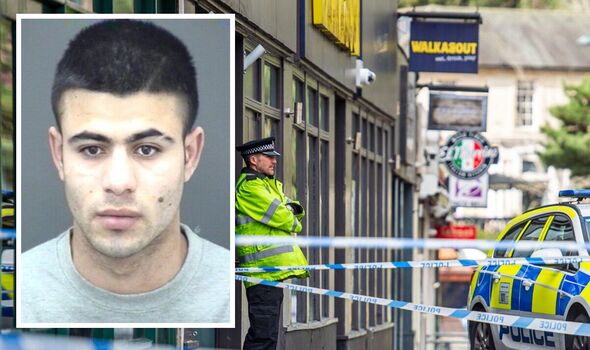 Police were warned up to seven times that a violent Afghan asylum seeker was carrying knives before he went on to stab a British marine with a 10-inch blade, it has been claimed. Lawangeen Abdulrahimzai, 21, pretended to be 14 years old when he arrived in the UK to claim asylum on Boxing Day 2019. He was let in, despite a double murder conviction in Serbia, a drug dealing conviction in Italy, and rejection for asylum in Norway. He was also four years younger than he claimed to be.

The Home Office also reportedly failed to compare Abdulrahimzai’s fingerprints against police databases because he was supposedly too young to have this done.

Authorities only clocked his age after police arrested him for the murder of Thomas Roberts, 21, in March.

After the arrest, Abdulrahimzai claimed he was 16 years old. But an age determination hearing took place and a judge ruled he was born in 2001 based on dental evidence.

The killer’s ex-cricket teammates in Bournemouth also warned Dorset police that the man nicknamed “Lo” was carrying a machete, just two days before the killing.

Dorset police said inquiries were pursued but Abdulrahimzai was not arrested and no knife was recovered.

They said there was no evidence the knife was being used in a “threatening manner”.

In November 2020, while the man was being cared for by former foster mom Nicola Marchant-Jones, he was absently put on trial in Serbia.

The authorities convicted and sentenced Abdulrahmzai to 20 years in prison for killing two people with a Kalashnikov rifle in 2018.

Shortly after the Serbia sentencing, in December 2020, Ms Marchant-Jones contacted social services who then contacted police after she spotted him with a knife on a shopping trip.

Speaking at Abdulrahmzai’s trial where he was convicted of the murder of aspiring British marine Thomas Roberts, Marchant-Jones said he was a “very troubled individual and said he received money for street fighting.

The Afghan also had a record of self-harm having “swallowed anti-freeze” and “cut his arm”.

He was said to have been rejected from counselling because he failed to meet the criteria due to asylum-seeking status, the court heard.

During the trial, Abdulrahmzai claimed he had a brutalised background in Afghanistan.

On his opening defense at Salisbury Crown court, he broke down sobbing as he described what the Taliban in Afghanistan had done to him.

He claimed the Taliban planted bombs at his family home after they believed them to be colluding with the US.

In court, he said: “I have seen some explosions not very far away. There was an American base not far from where we lived and the Taliban would come and demand things and there would be fighting and gunshots.

“They used heavy weapons like rocket launchers. They planted bombs around my house, I was at my uncle’s house at the time, when I came home my parents were dead. I saw their body parts and a lot of blood.”

He also claimed the Taliban tortured him for up to three weeks before dumping him on the side of the road.

During the case, the jury saw photographs of scarring all over Abdulrahimzai’s body.

Dorset Police said the man was not marked on police intelligence databases as having any convictions and that the foreign convictions are for “other agencies”.