A constitutional tribunal in Poland ruled on Thursday that abortions for fetal abnormalities violate the country’s Constitution, effectively imposing a near-total ban in a nation that already had some of the the strictest abortion laws in Europe.

The debate over a woman’s right to terminate a pregnancy, a divisive issue in a staunchly Roman Catholic country, mirrors the bitter polarization of a society caught between traditional religious values and more liberal ideas.

Before the decision, which cannot be appealed, Poland permitted terminations only for fetal abnormalities, a threat to a woman’s health or in the case of incest or rape.

But in practice, the overwhelming majority of legal abortions — 1,074 of 1,100 performed last year — are as a result of fetal abnormalities.

Abortion rights advocates say those numbers reflect the restrictions already in effect, which make it all but impossible for Polish women to obtain a legal abortion, prompting them to seek illegal abortions or go abroad.

“In practice it takes weeks, sometimes months,” to obtain a legal abortion, said Karolina Wieckiewicz, a lawyer and activist with the rights group Abortion Without Borders. “Some people decide to risk the battle in Poland; others look for alternatives.”

The government has been at loggerheads with the European Union, of which Poland is a member, over minority and women’s rights. It has also been criticized for compromising the independence of the judiciary, including the constitutional tribunal, which is supposed to be the main check on the governing party. But the bloc has been failed to tame Poland’s illiberal drift. 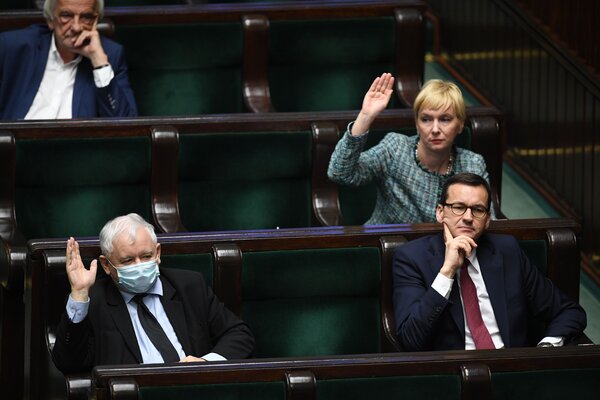 “The European Union does not want to get involved,” said Barbara Nowacka, an opposition lawmaker who co-wrote a letter to the tribunal’s president, Julia Przylebska, appealing to her conscience. “We are left to fend for ourselves, with a barbarian law.”

The tribunal ruled that abortions on the basis of fetal abnormalities violated the dignity of human life, a principle enshrined in the Polish Constitution. It further held that such abortions go against the principle of nondiscrimination and respect for human life, and that a fetus acquires those rights at conception.

Women’s rights advocates say that the tribunal’s decision will in some cases force women to give birth to terminally ill children and will amount to an effective ban on abortion — something the government has not been able to accomplish through legislation.

Previous legislative bids to tighten abortion laws were met with mass demonstrations with thousands of women pouring into the streets. Public opinion polls have shown overwhelming support for the country’s current abortion rules, and it is unclear how the tribunal’s decision will affect that.

Jaroslaw Kaczynski, the leader of the governing Law and Justice party and Poland’s most powerful politician, has repeatedly promised to tighten access to legal abortions.

“I would really like this kind of abortion to be at least restricted to the most extreme cases,” Mr. Kaczynski said of fetal abnormalities in an interview this year with Polish news outlets this year.

Analysts say the Law and Justice party is unlikely to have a more auspicious moment to end legal abortion, with the pandemic discouraging mass demonstrations and the next election three years away.

Nevertheless, a group of conservative lawmakers asked the constitutional tribunal to review the compatibility of the current legislation with the Constitution. “The Parliament has been unsuccessfully trying to strengthen the protection of life for the past 20 years,” said Bartlomiej Wroblewski, a Law and Justice lawmaker who was one of the initiators of the request. “This speaks in favor of trying a different road.”

Ms. Nowacka, the opposition lawmaker, said it was introducing a total abortion ban through the backdoor. “There will be no better time for the ruling party to do this,” she said. “A pandemic is raging in Poland, people are busy with other things, and the next election is far away.”

“The decision of the constitutional tribunal means freezing the issue for years, accepting that life and dignity of women are less important than life of a fetus,” Ms. Nowacka added.

Critics of the government at home and abroad have accused the tribunal of doing the government’s bidding. Eleven of its 12 judges were appointed by the governing party, and the head of the tribunal, Ms. Przylebska, is a longtime friend of Mr. Kaczynski.

“Since Kaczynski and his party came to power, the tribunal has been deliberately destroyed,” said Monika Platek, a law professor at the University of Warsaw. “Its function is to endorse all decisions of the authorities regardless of whether they’re rational or in accordance with the Constitution.”

Amnesty International, the Center for Reproductive Rights and Human Rights Watch, which sent an expert to monitor the hearing, expressed concern over what they described as the government’s assault on women’s rights and the judiciary.

“The proceedings take place in the context of repeated government attacks on women’s rights and efforts to roll back reproductive rights, as well as legal and policy changes that have undermined the independence of the judiciary and rule of law in Poland,” the organizations said in a statement.