Heavy fighting has forced thousands of people from their homes in Myanmar, as France called for the urgent delivery of aid.

Chin State, which borders India, has seen some of the most intense battles of the last week as the Burmese military clashed with rebels opposing February’s coup.

Local residents say thousands had to flee after junta forces attacked the town of Mindat as it tried to flush out ethnic fighters from the newly formed Chinland Defence Force (CDF).

Pictures shared widely on social media show women and children carrying small baskets of possessions on their backs as they walked through the forest. 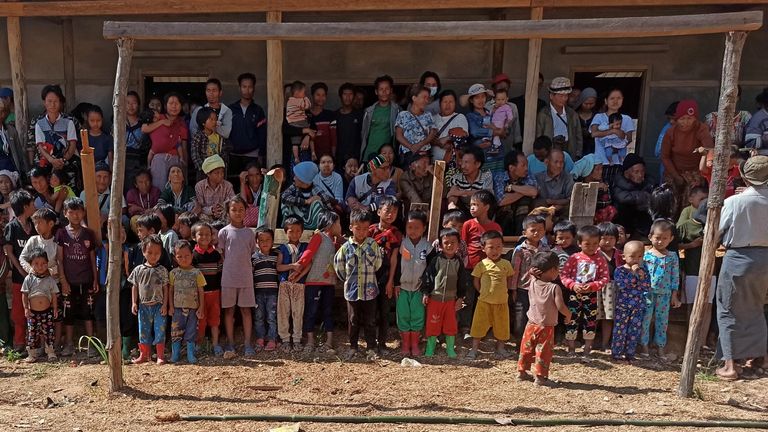 In others, villagers are sitting under makeshift shelters on the jungle floor.

“As of yesterday, more than 10,000 have fled. We don’t have the update for today yet. People are still calling us saying that they want to flee,” local aid worker, Ma Mei, told Sky News.

“Most of the people are hiding in the jungle. People are looking for ways to reach their relatives but some of the routes are being blocked so they have to hide in the jungle.”

“It’s raining there and we heard that some slipped from the mountains while fleeing. Some died during their journey. Some of them are pregnant – two of them I know have given birth.”

Water and power have been cut off in some areas, with claims soldiers have set up camp in some of the villagers’ empty homes.

“The military is now destroying the houses, especially the ones the residents left. They have also taken some of the local drinks that people made… and some of their belongings,” Ma Mei said.

“They entered the houses, arrested people and beat them. They also checked their mobile phones and have taken those electronic devices.”

Sky News could not immediately verify the allegations. 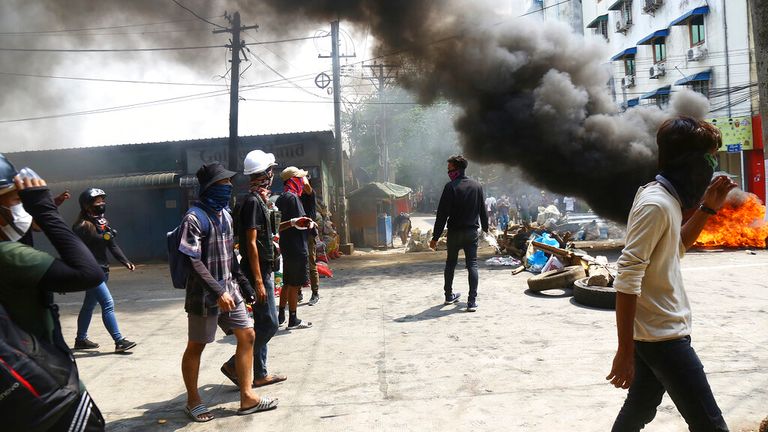 Limited internet access has also made verifying photos and videos of the situation on the ground difficult for humanitarian groups and journalists.

The French Embassy in Myanmar blamed a “disproportionate use of force and war weapons against civilians by the military” for causing a loss of human life and the displacement of thousands in Chin State.

“The restoration of access to water and electricity as well as the delivery of humanitarian aid for population in need are an immediate necessity,” the embassy said in a statement on its Facebook page.

Officials in India said this week that more than 15,000 people had crossed the border to safety there in the last three months.

Mindat is one of several towns where residents have taken up arms, refusing to recognise the authority of the military government.

At the weekend, security forces sent in reinforcements by helicopter as they tried to target resistance fighters who have been battling them for more than three weeks, often armed with homemade hunting rifles.

“We are aware of increasing violence in Mindat, including reports of the military shooting civilians. Attacks on civilians are illegal and cannot be justified,” the UK embassy in Myanmar said in a statement on Saturday.