LONDON — Prince Harry spoke candidly about his struggles with his mental health as a senior member of the royal family in a newly released interview, admitting that he used alcohol and drugs to try to cope with personal trauma.

“I was willing to drink, I was willing to take drugs, willing to try and do the things that made me feel less like I was feeling,” he said, referring to efforts to address his grief years after the death of his mother, Princess Diana.

Harry’s comments were made in episodes of the documentary series “The Me You Can’t See” that he co-produced with Oprah Winfrey, the latest in a series of frank discussions he has had about mental health. Since stepping back from their royal duties last year, Harry and his wife, Meghan, the Duchess of Sussex, have spoken openly about their strained relationship with the rest of Britain’s royal family, most notably in an explosive televised interview with Ms. Winfrey earlier this year.

In interviews for the AppleTV+ series released on Friday, the prince said he had been “all over the place, mentally” in addressing the death of his mother, who was killed in a car crash in 1997.

“I would probably drink a week’s worth in one day on a Friday or a Saturday night and I would find myself drinking not because I was enjoying it but because I was trying to mask something,” Harry, now 36, said as he described the period of his late 20s and early 30s as a “nightmare.” He did not specify which drugs he had taken.

He said he had experienced panic attacks and severe anxiety during his time as a working member of the royal family and told Ms. Winfrey that he had begun therapy four years ago when he realized he could lose his relationship with Meghan if he did not “fix” himself.

Harry also spoke of the moment his wife told him she was experiencing suicidal thoughts — something she revealed during the couple’s interview with Ms. Winfrey earlier this year.

“I was ashamed to go to my family because, to be honest with you, like a lot of other people my age probably relate to, I know that I’m not going to get from my family what I need,” he said. 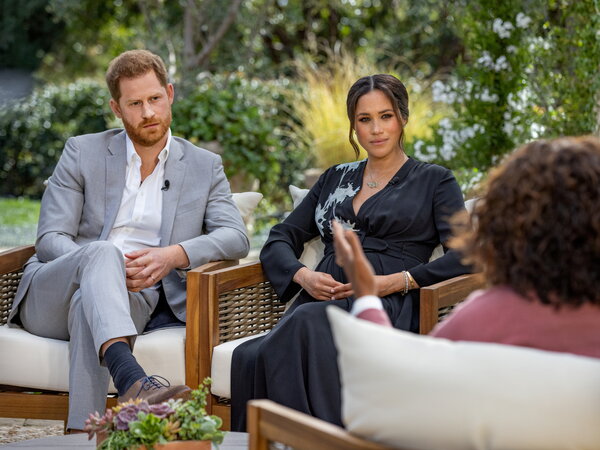 Speaking of the intense scrutiny that his wife had faced in years of being hounded by Britain’s tabloid press, Prince Harry said he had felt “completely helpless.”

“I thought my family would help but every single ask, request, warning, whatever it is, just got met with total silence or total neglect,” he said. “We spent four years trying to make it work. We did everything we possibly could to stay there.”

The prince also described feeling helpless before his mother’s death, and recalled sitting in a car with her as a child and being chased by the paparazzi. He said Diana was almost unable to drive because of the tears in her eyes.

He also reflected on her funeral procession. “It was like I was outside of my body and just walking along, doing what was expected of me,” he said. Harry said he had avoided thinking and talking about his mother’s death until it started to take a toll on him mentally in his late 20s.

Harry and his brother, Prince William, and his sister-in-law, Catherine, the Duchess of Cambridge, in 2016 launched a campaign called Heads Together to encourage people to talk with friends and family about their mental well-being.

In the interview with Ms. Winfrey in March, Harry touched on the rift that his acrimonious split with the royal family had opened up between him and his relatives. “There’s a lot to work through there,” he said of his relationship with his father.

Last week, Harry alluded again to the difficulties he faced as a member of the royal family, saying it was “a mix between ‘The Truman Show’ and being in a zoo” in a podcast interview.

“It’s incredibly sad,” Harry said in the documentary released Friday, referring to the decision by him and his wife to leave Britain and their work in the royal family behind them. “But I have no regrets at all.”