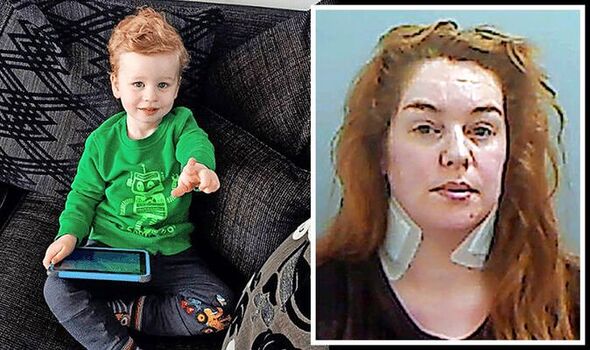 Carol Hodgson was told yesterday she must spend at least 18 years behind bars after she admitted murdering Daniel Hodgson- Green, two.

She killed the tot on the morning of a Family Court hearing that could have led to his father, Stefan Green, being reunited with his son.

After smothering Daniel, Hodgson, 40, wrote to her mother, slashed her throat and wrists and lay beside his body to die with him.

Although Mr Green had done nothing to be denied access to his son, Hodgson secretly moved house when the pair split up, Teesside Crown Court was told.

On the day of Daniel’s murder, February 2, the Family Court was due to hold a fact-finding meeting, which was the first step in Mr Green’s fight for access.

The Crown Court heard that Hodgson’s mother, Christine Oaten, discovered the horrific scene when she went to her daughter’s bungalow in Guisborough, North Yorks, after a taxi taking her to the court failed to arrive.

Paramedics could not save Daniel, but Hodgson survived, the court heard.

A more detailed letter said: “The only way I could protect Daniel was to take him with me.”

In what Recorder of Middlesbrough Judge Paul Watson called a “heart-rending” statement, tearful Mr Green told the court he had contemplated suicide after his son’s murder.

He said: “I miss holding him in my arms, cradling him to sleep, coming home from work to cuddle him and hush him back to sleep.”

“I would look into his bright blue eyes and get lost in how lucky I was that he was my son.”

“This has taken a heavy toll on me and my family. The shocking nature of his death has made things so much worse.”

“I have gone through searing rage to broken heartbreak and then for months I was just numb.”

“I now suffer from PTSD and night terrors, so I barely sleep. My life has lost all meaning and I struggle to find a way forward. The future seems hopeless knowing I will never see my little boy again.”

Jailing Hodgson for life, Judge Watson told her: “There is no evidence the balance of your mind was disturbed.”

“You were not in anguish or the heat of a moment. It was not an act of mercy – it was a horrific and truly awful crime.”

“The fact you intended to take your own life, which I accept, offers no mitigation for the taking of Daniel’s.”

Richard Wright QC, for Hodgson, said: “She had developed a wholly irrational, objectively unjustifiable, but genuinely held belief that she was compelled to act as she did.”