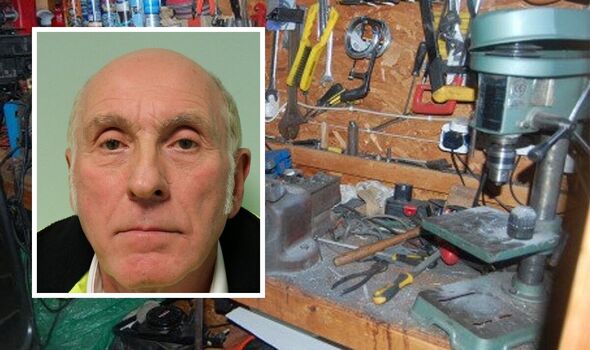 A 73-year-old “gun nut” who built his own guns from scratch has been imprisoned. Raymond Frederick Nugent will serve seven and a half years after police raided his home and found live ammunition and “lethal” working weapons. He was sentenced at Snaresbrook Crown Court in London on Friday after being convicted of 45 different firearm offences.

The man, who self-identified as a “gun nut”, was arrested in October 2019 after an investigation into imports of blank-firing weapons from Czechia in 2018.

Nugent, of Coltishall Road, had an arsenal of formerly deactivated weapons that he had reactivated.

The cache included a stun gun, a Turkish Atak 914 9mm pistol, and an Italian Bruni (BBM) Model ME .38calire revolver.

He claimed he never intended to sell or shoot the weapons although police found carboard cutout templates of different weapons used to make new firing mechanisms of the initially deactivated weapons.

Nugent also housed live ammo converted from blanks that could have been shot out his weapons.

A weapons expert told the court last year that one of Nugent’s weapons was 25 percent more powerful than a factory-made version of similar calibre and style.

Detective Superintendent Victoria Sullivan, Specialist Crime, said: “Though no evidence was found of any associated criminality linked to Nugent’s activities, the arsenal he had in his possession was lethal and, in the wrong hands, quite capable of causing incredibly serious harm.

“It’s thanks to quick and decisive partnership working with our colleagues in the National Crime Agency, who alerted us to Nugent, that we’ve been able to bring him to justice here.”

Metropolitan Police Detective Sergeant Andy Henderson, the investigating officer, added: “This investigation demonstrates how we will seek to arrest and prosecute anyone concerned in the production of dangerous weapons.

“Following the conclusion of criminal proceedings the weapons will now be destroyed.

“It is sheer luck that Nugent himself managed to avoid serious injury during production; though some appear crude, it is a highly dangerous enterprise, and anyone concerned in similar activities should be well aware of the consequences.”

Over the last several years, there have been multiple cases of deadly weapons being made from blank firearms, many of which are thought to have come from the Czech Republic.

Last month, Alireza Nowbakht, 49, from Smethwick in the West Midlands was charged as part of an NCA investigation into the conversion of blank firearms.

NCA Branch Commander Mike Pope said at the time: “It is illegal to modify or adapt blank-firing firearms into viable guns, and preventing them from entering the criminal supply chain is a priority for the NCA and our partners.

“We believe this operation has significantly disrupted a network involved in firearms supply and protected the public of the West Midlands.”

In 2021, the National Crime Agency confirmed it had seized 522 prohibited “blank firearms” as part of its Project Vizardlike and 83 people had been arrested.

“This type of firearm can be converted into a lethal weapon, and then used by organised criminals to threaten, intimidate, and kill.”