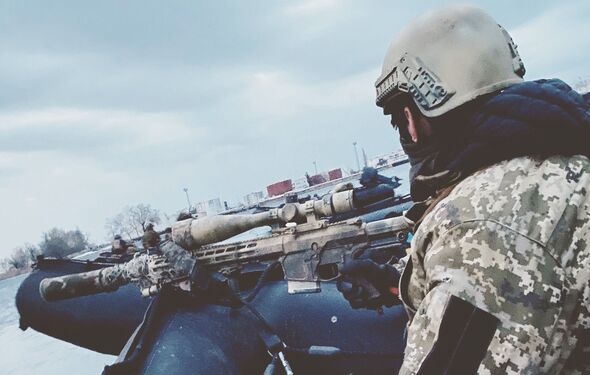 A former British soldier fighting in Ukraine has said it is “great news” the UK’s Challenger 2 tanks are on the way. Christopher Perryman, 38, from Durham, has been operating as a sniper on the frontline fighting with a unit of foreign fighters attached to Ukrainian forces.

The former Royal Regiment of Fusiliers soldier said he served 16 years in the British Army before heading to Ukraine, he is not a serving British soldier anymore.

Speaking exclusively to Express.co.uk Mr Perryman said when news reached his unit that heavy armour units were being sent by the British Government he was “absolutely over the moon”.

However, he said some countries had still been “frustratingly slow” in providing armoured vehicles and tanks and that “a lot of lives could have been saved” if equipment had come sooner. So far among the NATO allies, only the UK has agreed to send tanks, in the form of 14 British Army Challenger 2s.

He said: “With regards to heavy armour coming from the UK, I’m absolutely over the moon as Russian armour got hit pretty hard in the first few months of the conflict so with all these additional vehicles coming over that will certainly aid in pushing the front line back towards Crimea and allow Ukraine some breathing space

“I think the UK Government along with most Western countries have been absolutely amazing with the aid they have been providing. Especially medical and housing displaced civilians.

“The weapons that have been provided such as Javelin and all other makes of anti-tank weapons most definitely turned the tide early into the conflict, however certain countries have been frustratingly slow in providing armoured vehicles and tanks.

“It’s like every leader was waiting for someone else to go first. It’s absolutely great news main battle tanks are finally on the way with additional artillery and anti-air defences but if they had been sent earlier a lot of lives could have been saved.”

Christopher said cold weather equipment and ammunition was problematic for soldiers fighting on the front line. The former soldier said he is relying on donations from well-wishers to his PayPal account in same cases.

He said: “Cold weather gear is a massive issue, we just can’t seem to get any unless it’s donated.

“Small arms ammunition and weapons are very problematic. I currently carry three weapons, AZ10 (Uar-10) which is 7.62-51mm 308 and getting ammunition is almost impossible even though it’s a Ukrainian weapon.

“All of my ammunition comes from either donations or I have to buy it from gun stores if they have stock. I also have a police FN Scar which is 5.56mm. The rifle itself is five years old and is so unreliable it’s unreal.

“The situation on the front changes daily. Most of the time we can’t push forward due to the arty (artillery) and difficulties in re supply. Most operations we go on we have to carry five to eight days’ worth of food and water on top of all of our equipment and which is incredibly difficult.”

Despite difficulties with equipment the Christopher said morale was “not bad” at the moment but Russian artillery was having an impact and working “incredibly well” for Putin’s soldiers.

He said: “Nothing worse than hearing arty being fired then sitting there listening for the whistle to see how close it’s going to be to your position. More anti-air is needed across the front line along with better small arms weapons.

“Tanks and armoured vehicles are great but the shooters on the ground need weapons that work and more ammunition. The attacks are increasing up north but south east they have adopted more of an artillery campaign which if I’m honest is working incredibly well unfortunately for us.”

The Foreign and Commonwealth and Development Office (FCDO) said it continues to advise British nationals not to travel to Ukraine.

UK Defence Secretary Ben Wallace also appealed to allies to keep up the pressure on Moscow on the battlefield.

“The UK is leading international support for Ukraine by becoming the first nation to donate modern, Western main battle tanks,” he said in a statement.

“It is crucial that we build on this momentum supported by our international partners, who are determined like us, to ensure that Putin’s illegal and unprovoked invasion fails.”

The Ukrainians are seeking around 300 tanks to enable them to mount a counter-offensive, with the German-built Leopard 2s – which are widely used by European armies – seen as the most suitable candidate. Poland has offered to send a company of its Leopard 2s, but requires a sign-off from Berlin, which issued the original export licences, if they are to be re-exported.

DON’T MISS: M40 crash sees two dead and 12 injured as motorway to be shut for hours