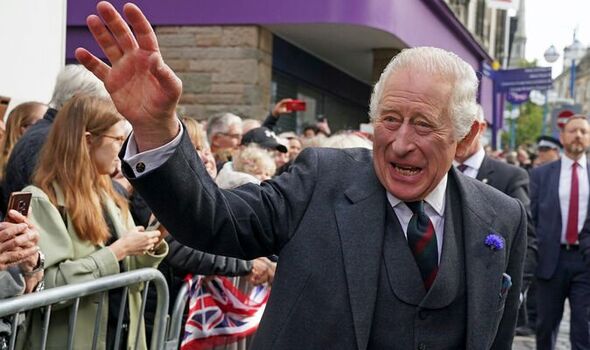 King Charles III and his Queen Consort have delighted hundreds of people in Dunfermline as they hold their first joint public engagements since royal mourning ended. The royal couple, who have made the trip to mark the former Scottish town becoming a city, have been welcomed by groups including a local pipe band and schoolchildren. They will attend an council meeting at the City Chambers where the King will formally mark the conferral of city status on Dunfermline, before making a speech.

Local residents had been gathering outside the city chambers ahead of the visit from the King and Queen Consort.

Bill Henderson, 71, said: “It’s a historic event. I was born just before the Queen was came to the throne, so she’s been my monarch my whole life. It’s just exciting.

“And especially a King Charles coming back to Dunfermline when King Charles the First was born here, however long ago that was.”

Teacher Carol Williams, 52, said: “It’s such an honour for Dunfermline to be his first visit as the new King.”

The King and Queen Consort will visit Dunfermline Abbey to mark its 950th anniversary and meet representatives from Historic Scotland to learn about the history of the local area.

Later today, the King and his wife will also host a reception at the Palace of Holyroodhouse in the Scottish capital of Edinburgh to celebrate British South Asian communities.

This will see them meet up to 300 guests of British Indian, Pakistani, Bangladesh, Sri Lankan, Nepalese, Bhutanese and Maldivian heritage from throughout Britain.

It will be an event that will recognise the contribution many from these communities have made to the National Health Service, arts, media, education, business and the Armed Forces.

In a first after becoming King, the new monarch will also hold an investiture ceremony for a small group of local people.

Since the Queen’s Platinum Jubilee celebrations in early June, eight places throughout the UK have won city status.

The bid from Dunfermline for this status was based on its heritage and its historic status as an ancient seat of royal power.