One listener was so appalled they claimed that she had just gifted another 100,000 votes to Nigel Farage’s Brexit Party. The arch-Remainer was discussing Labour’s second referendum policy on LBC radio with host Iain Dale when the radio veteran blasted: “What I don’t understand is how a second referendum solves anything?” Ms Thornberry replied: “Because people like me cannot agree to Theresa May’s deal because we think it is bad for the county and the economy.

“If the public were to say ‘actually, you know what, we want to vote, we want Theresa May’s deal -“

But Mr Dale burst in: “Which you know they’re not going to do. Which is why you want a confirmatory referendum.

“Come on, you know perfectly well – you’ve seen all the polls, you know that people don’t like the deal.

“So if you have Remain versus the deal we all know that that would be a rigged referendum, wouldn’t it? 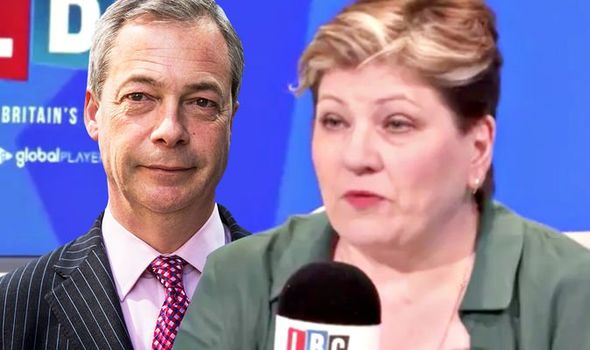 “You’ve got to have no deal on the ballot, surely?”

But the Labour minister point blanc refused, saying: “I couldn’t agree to no deal – I don’t think it should be on the ballot paper, that’s my view.”

One tweeted: “Telling 17.4M people that their votes didn’t matter, we will make you do it again is the stuff of banana republics.

“There are winners and losers in democratic votes @EmilyThornberry – that is the whole point of a democracy. Stop dictatorships! There’s no prizes for 2nd place.”

Another claimed: “I reckon @EmilyThornberry has just handed @brexitparty_uk another 100,000 votes.

“She is THOROUGHLY, 100 percent undemocratic & deceitful.”

A third also commentedt: “Let’s give the public a say, says Emily, as long as Remain MPs choose the questions they want, it’ll settle things…

“What a disgusting abuse of power…”

Cross-party talks between the Government and Labour will continue despite Tory opposition to Jeremy Corbyn’s key demand.

After a marathon Cabinet meeting ministers agreed to continue the cross-party efforts but stressed it was “imperative” for a Brexit deal to get through Parliament by the summer recess.

With Theresa May’s future linked to the passage of a Brexit deal, getting legislation through the Commons and Lords by the summer break could also pave the way for her departure from Number 10.

The Prime Minister and Labour leader will meet in Parliament to discuss the Brexit talks on Tuesday evening.

Ministers spent more than two hours discussing the Brexit situation and despite the apparent lack of progress in talks with Labour decided the process should continue, but with a clear view that “we need to get a move on”.