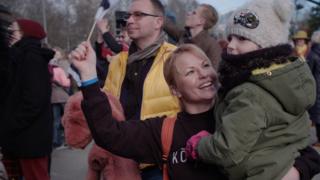 The concert had been organised in a hurry. Ten thousand people standing side by side on a Sunday afternoon, hands on chests, singing their country’s national anthem.

This spot in Tallinn was where 300,000 people had gathered three decades earlier, for the Singing Revolution, which helped Estonia break free from the Soviet Union.

The entrepreneur behind the latest concert, Karoli Hindricks, was five years old at the time. “I remember it well. I was here with my family, sitting on my father’s shoulders,” she says.

Now she wants to unite a country, which she feels has been torn apart by a heated political campaign.

The far-right Conservative People’s Party of Estonia (EKRE) doubled its vote and came third in March elections. They won 17.8% of the vote and catapulted their way into Estonia’s new coalition government, promising to protect an “indigenous Estonia”.

As EKRE leaders were sworn into power in parliament they made the “OK” symbol – a sign that has become an alleged dog-whistle for white nationalists.

The party has attacked immigrants, judges and journalists, and campaigned to end same-sex marriage and state-funded abortions.

Estonians ‘left behind’ by the boom

This election took many Estonians by surprise.

After decades of Soviet rule, Estonia’s economy is finally booming and in recent years it has become a haven for start-ups and new technology.

“Estonia has skyrocketed, from being one of the poorest countries in the world, to being the poster child of the world,” says Karoli. “But with this amazing success, we have left people behind”.

“We can’t say 100,000 people who voted for this party made a wrong choice; it’s about what drove them there, and how we get ourselves back together.”

Some 200km (125 miles) down the coast from the capital, is the most rural part of Estonia where the far right picked up the most votes.

“If you live in the countryside people think it’s almost a disability. You’re seen as a little bit dumb,” complains Indrek Jogisoo, a fisherman and farmer who voted for the party.

“I haven’t paid myself a salary since the financial crisis,” he says. “It seems that EKRE speaks about the problems of my life, and maybe people out here feel they’re now being listened to”.

Unlike other far-right political parties experiencing a surge in Europe, EKRE is fiercely anti-Russia.

Estonians have always seen their next-door neighbour as a potential security threat, and the party has turned on the country’s large Russian community.

It has called them untrustworthy and parasites, and pushed for Russian schools to be closed.

From the border town of Narva, a bridge over the river links Estonia to Russia. Here almost everyone is ethnically Russian.

“This is very bad for us,” says youth worker Kiril Gusev. “What I like least is their idea that Estonia is for Estonians only.”

“It’s divisive. If this kind of rhetoric starts at a high level of government then it is going to fuel conflict between Estonian and Russian speakers.”

Some Estonians fear that by isolating this community EKRE is indirectly playing into the Kremlin’s hands.

“So this actually creates a more favourable environment for Russian interference, because the level of cohesion here is weaker”.

EKRE’s success is part of a wave of nationalism and populism spreading across Europe. By entering government, EKRE hopes to wrestle some power back from the EU.

“We need to understand that the European Union is a union of sovereign countries, with different interests and we can’t make everything common,” EKRE MP Jaak Madison tells us.

The party is hoping to secure its very first MEP in upcoming EU elections, and has already promised to join a new far-right alliance, led by Italy’s Matteo Salvini.

But Estonia is one of the biggest recipients of EU money – getting back more than four times what it pays in.

There are fears that the party’s stance may threaten the future of this tiny Baltic country.

“We are so proud of our success and we don’t want to go backwards,” says the defeated opposition leader Kaja Kallas.

“With the neighbour we have, it is vital we have good allies outside. If we head in a different direction, we could end up alone.”