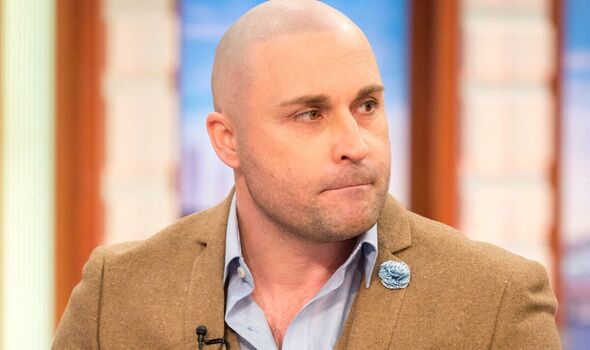 The former director of Dreamboys slashed his ex with an axe at her home and tied her up in a brutal attempted murder.

David Richards, 42, waited for five hours near the property before striking, attacking Alex Alam in front of her children in a “truly terrifying” ordeal.

Ms Alam suffered three skull fractures and needed 100 stitches as a result of the attack, which happened minutes after she had said goodnight to a friend with her two children asleep inside the house.

Richards was jailed today for the attempted murder, a charge he had denied and was convicted of after a trial.

He was jailed for a minimum of 27 years at Chelmsford Crown Court and given a restraining order meaning he cannot contact Ms Alam or go within 500 meters of any address he knows she is living at.

Judge David Turner KC said that Richards’ attack was a “hideous” culmination of the breakdown of his relationship with Ms Alam and his separation from his partner and family. The judge had heard Richards had bought a hatchet, boots and other clothing along with cable ties.

“I reject the suggestion that these purchases were made to keep you warm or dry,” the judge said.

“This was potentially disposable clothing to help you cover your tracks if required. I reject the absurd account that you gave to the jury that the hatchet and ties were required to disable a horsebox over frustration that jointly owned property was being managed. Nor do I accept that you went there that evening equipped like this for answers.

“The children were exposed to the aftermath of this bloodbath and will likely be impacted for the rest of their lives. It was a truly terrifying episode with horrific consequences.”

Richards had struck when Ms Alam had let the dogs out at the home in Stock, Essex, reports Essex Live.

Ms Alam managed to distract Richards, escape and arm herself and call for help.

Richards fled the scene but was later arrested by police.

During the trial, he claimed Ms Alam was the aggressor, which was rejected by the jury.

William Carter, prosecuting, read Ms Alam’s devastating victim impact statement. It said: “After a near-death experience, everything changed overnight. I’m now a single mum trying to manage as best I can while dealing with life-changing injuries. It all just feels too much for me to deal with. I’m having to deal with losing my independence, I am usually a together person.

“I’m a mixed bag of emotions and just can’t explain or put it into words. The paranoia I am experiencing is controlling my life. I can’t even go out of the house after 6pm or on my own. I need to live with flashbacks, still remembering everything that happened, begging him to let me go and then him striking multiple times with the axe.

“My children are my reason for living. The only reason I survived that night is my maternal instincts kicking in.”

Ms Alam said one of her children is still suffering from the memories of what they witnessed on the night and that they are suffering from a form of Post Traumatic Stress Disorder (PTSD).

The mum added Richards knew “exactly what he was doing” and that it “was his plan to kill me”. She detailed the numerous surgeries she has had, the 100 plus stitches she had to have, and how she is now unable to work in the medical profession which she had been training for before the incident.

She added that because of the stresses and impact of the injuries on her, the family are “struggling to make ends meet” and has had to rely on generosity of friends to help with purchasing essential items for her and her children. Richards, who appeared via video link from HMP Chelmsford, sobbed through most of Ms Alam’s statement.

Allan Lee Goh, defending, said that Richards had committed a “horrific attack”, but stated that he had been in a “highly emotional set of circumstances” at the time of the incident. He encouraged the court not to pass a life sentence on Richards to allow for him to be rehabilitated.

Richards, who was of previous good character, was also convicted of breaching a non-molestation order.

Dreamboys is a male revue brand with touring theatre shows and nightclub residencies known for its male striptease performances.