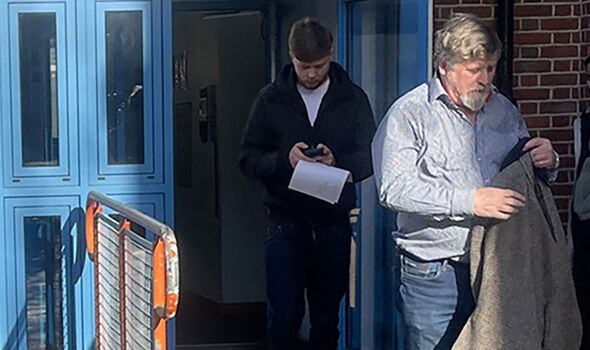 A father and son left a fellow plane passenger with “horrendous injuries” when they attacked him following an argument about a seat being pushed back.

Robert Powell, 58, the director of an online counselling company, and his son James, 22, were found guilty by magistrates of assault by beating earlier this month.

At their sentencing hearing, a judge said both had “not shown a bit of remorse” for launching the assault on Sreenivasayyr Janakiram in September 2021.

Uxbridge Magistrates’ Court heard the Powells had gotten into a row with Mr Janakiram on a flight to Heathrow on September 25, 2021.

District judge Deborah Wright said the argument was “to do with the seat going back”.

It was said Robert Powell approached Mr Janakiram as he waited for the terminal shuttle train at Heathrow’s Terminal 5 and pushed him.

James Powell then became involved and rained a number of blows on Mr Janakiram, preventing him from getting away, the court heard.

Mr Janakiram was left with cuts and bruises on his face and neck, including a large swelling on his cheek.

“You needn’t have approached that man. He wasn’t presenting any threat to you. James Powell you rained significant injuries upon him. You assisted effectively by preventing him from moving.

“The behaviour of both of you was appalling.”

James Powell was handed a 26-week prison sentence while his father was given a 16-week sentence – both suspended for 18 months.

Robert Powell had claimed their victim had threatened to kill him while on the plane – an allegation rejected by the court.

He said “Under the laws of this country, I’m guilty of assault and I must accept that.”

In mitigation, Robert Powell alleged: “At the time, I thought I was standing up for myself because someone threatened me and I realise that was wrong and that the courts in this country don’t see that as appropriate behaviour.”

Ms Wright replied:  “You clearly targeted him in the hall, he was standing there minding his own business. You could have left it, but you decided not to. He ended up with horrendous injuries. You two acted as a pack.”

As well as the suspended prison sentences, the pair were ordered to pay £998 each – made up of £250 compensation to the victim, £1,620 of prosecution costs and a surcharge of £128.

Robert Powell was also given an electronically monitored tag for three months while his son was given a tag for six months.