Home » Europe » Euro 2020: Gareth Southgate says England determined ‘more than ever’ to take the knee after being met with boos

Euro 2020: Gareth Southgate says England determined ‘more than ever’ to take the knee after being met with boos

England are determined “more than ever” to take a knee during Euro 2020, Gareth Southgate has said.

It comes after some fans booed when players made the anti-racism gesture before Wednesday’s warm up game against Austria at Middlesbrough’s Riverside Stadium.

Ahead of Sunday’s game against Romania at the same venue, the England boss said: “The first thing is we are collectively really disappointed it [the booing] happened.

“Some people decide to boo – I think those people should put themselves in the shoes of those young players and how that must feel, and if that was their children, how would they feel about their kids being in that sort of situation.” 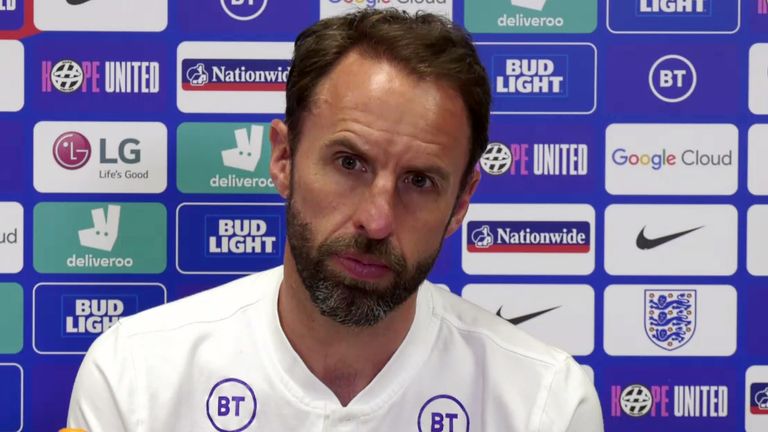 The sight of players taking the knee ahead of kick-off has become a staple of English football since last summer, designed to highlight police brutality and discrimination as the Black Lives Matter movement took off worldwide following the murder of George Floyd.

Despite that, players including England star Marcus Rashford have regularly been subjected to racist abuse online, adding to the calls on social media companies to take stronger action against accounts who engage in abuse.

Southgate continued: “The most important thing for our players is to know that we are totally united on it (taking the knee), we’re totally committed to supporting each other, supporting the team.

“We feel more than ever determined to take the knee through this tournament. We accept there might be an adverse reaction and we’re just going to ignore that and move forward.

“I think the players are sick of talking about the consequences of should they, shouldn’t they. They’ve had enough really. As far as I’m concerned they are not going to take more questions on this through the tournament. If it happens, it happens. They’re very clear. Their voices have been heard loud and clear.

“They are making their stand but they want to talk about the football and want the focus to be on the football.”

Southgate was joined by midfielder Kalvin Phillips at a news conference, who said he was “confused and disappointed” by the booing.

“I think I was just happy that the boos got cancelled out by the fans cheering in the end, but I don’t think it’s a great situation, especially for us players,” he said.

“All we can do is just focus on the game and speak about it afterwards. And I think the team spoke about it together and we came up with the conclusion that, regardless of what goes on around, we’re still going to participate in the kneeling and I think that’s a great idea.”

The delayed European Championships – which were meant to take place last year – start on 11 June.

England are due to open their campaign against Croatia on 13 June at Wembley.