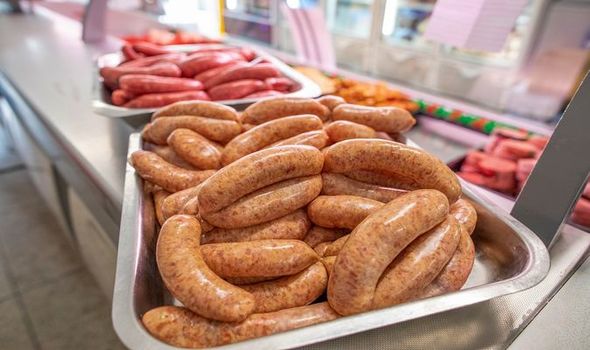 It is understood the EU will offer a clause allowing British bangers to be sold in Northern Ireland post-Brexit. The Daily Express was told yesterday that the EU will table “far reaching” proposals to end the impasse. Eurocrats wanted to ban British mince and sausages entering the province on health and safety grounds. But next week the European Commission will propose an exception that allows “national identity goods” like bangers.

The UK and EU were set for a trade war over checks on chilled meat shipments into Northern Ireland from the mainland. They had been postponed for a grace period in the Northern Ireland Protocol – which creates a customs barrier between Britain and the province to prevent a hard Irish border – but that expired.

The absence of a border is one of the basic principles of the 1998 Good Friday Agreement. Former Brexit secretary David Davis said of the EC offer: “It demonstrates that taking a firm line with them works.” Meanwhile, Brexit minister Lord Frost has set an early November deadline for negotiations, or he will trigger Article 16 – allowing parts of the protocol to be suspended temporarily.

Now, EC vice-president Maros Sefcovic will unveil proposals covering medicine supplies, animal health, customs procedures and a stronger role for Northern Ireland in managing the protocol. But the EU continues to fan the flames over the cross-Channel fishing war and little is being done to stop migrants crossing from France.

Ex-Brexit Party leader Nigel Farage said: “A victory on sausages on the day huge numbers of migrants left French beaches in broad daylight to Dover and our Channel fish stocks are being destroyed. Is this really a victory? I think not.”