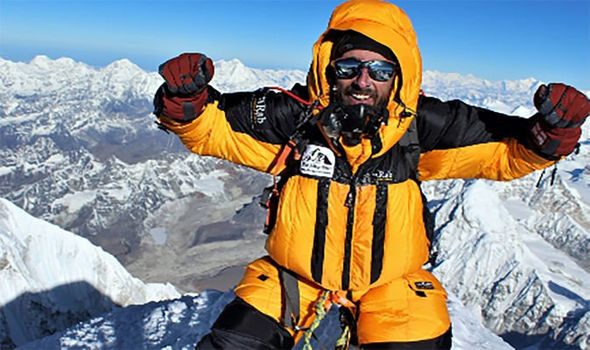 Simon Ferrier-May, 30, stood on top of the world’s tallest peak after overcoming symptoms he thought were fatigue and altitude sickness. Covid was only confirmed after he recovered.

His route was also dotted with the bodies of 200 climbers who died during previous expeditions and weren’t brought down because of the difficulty of lifting heavy weights at that altitude.

Simon and his guide Sherpa Pemba Nurbu became the only two people from their 24-strong expedition to reach the summit.

He told the Daily Express: “After I got Covid, any version of success seemed unachievable – so I’m very happy to have got the summit. It means more to me having beat the trials and tribulations.We still hit the summit, still made it back down” He spent almost a year on preparations, running an average of 70 miles per week.

But Simon added: “So much went wrong. Everest hasn’t been hit by a cyclone since 2005 during the climbing season.This year it was hit by two. I also fell down a crevasse – I freaked out, pulled myself out.There were just scratches and bruises. But there was a realisation that one small lapse and it becomes a survival situation.”

He had already conquered Covid in base camp, although he didn’t realise at the time. He and other campers suffered symptoms such as vomiting, diarrhoea and fatigue.

But there were no coronavirus testing facilities and climbers routinely fall ill on expeditions because of the altitude and physical demands.

Severe exhaustion set in and at one point his motivation dipped so low that Simon did not want to leave his tent to find food.

Simon said: “I got sick three times on that expedition from all sorts of things. Your immediate thought isn’t Covid.”

He battled on and, after sharing their last five oxygen bottles with his sherpa – half the amount they needed – they reached the summit on May 23.

Close to the top they saw the body of a climber who died the previous week on his descent.

Simon said: “I thought he was lying there, taking a rest.Then I saw the snow had come over his legs and realised he was dead.”

At the summit Simon put some snow in a bottle as a gift for his mum. He said: “Everest, for me, is done. I’m never coming back.”

But he is already planning his next mission – to scale one of the world’s unclimbed mountains.