Eurocrats will suspend Swiss stock exchanges’ direct access to European investors in July unless the country signs up to a draft EU partnership treaty. Johannes Hahn, the European Commissioner overseeing the talks, insisted Brussels must stand firm and be prepared to make an example of Switzerland. In an internal note, the EU official insisted the course of action was necessary as a warning to Britain’s next prime minister that Brussels won’t compromise.

Mr Hahn wrote: “We simply cannot accept any further attempts of foot dragging and watering down internal market rules, especially in what is probably the decisive phase regarding Brexit.”

Much like the Brexit process, Swiss government negotiators have asked to renegotiate their draft deal with the EU after it was blocked domestically.

Mr Hahn insisted that blocking Switzerland from EU financial markets “may be just the warning shot across the bow they need”.

Brussels could also use similar threats to block the City of London as part of any future UK-EU financial services deal. 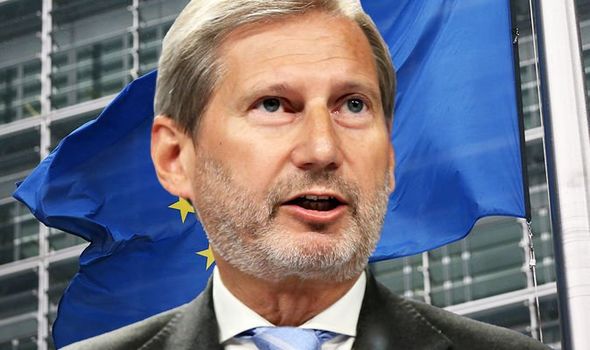 Swiss foreign minister Ignazio Cassis vowed not to bow down to threats and be rushed into simply signing off the agreement.

He said: “We have taken very clear decisions and made progress in this dossier but the tempo demanded by the EU does not correspond to the possibilities of a direct democracy like Switzerland.

“As a result, we would say: We have moved and we expect the European Union to move.”

Swiss voters have raised concerns that the deal surrenders their country’s sovereignty to Brussels.

The agreement would see Switzerland, a non-EU member and outside the bloc’s single market, routinely adopt the bloc’s rules and have EU citizens in the country enjoy the same rights as in their home countries.

The planned “framework agreement” is designed to replace 120 bilateral accords governing the relationship between the EU and Switzerland.

If the Swiss government refuses to sign the deal and the Commission decides to extend the current recognition deal, the Swiss stock market will lose access after June 30.

The internal Commission note said: “An expiry will cause no major disruptions, as the sector has already been preparing for this scenario.”