Erdogan Presses for Answers From Saudi Prince in Khashoggi Killing

ISTANBUL — President Recep Tayyip Erdogan of Turkey has made his strongest personal challenge yet to Crown Prince Mohammed bin Salman of Saudi Arabia over the killing of the dissident Jamal Khashoggi, saying he was still waiting for answers and expressing frustration with the Saudi response in comments published on Tuesday in pro-government newspapers.

Speaking to Turkish reporters while traveling back from Paris, where he met with leaders from France, Germany and the United States, Mr. Erdogan said the crown price was failing to follow through on his promise to expose the truth about the disappearance and death of Mr. Khashoggi.

“The crown prince says, ‘I am going to clarify the incident and do what is necessary,’” Mr. Erdogan said in the published remarks. “The crown prince tells this to my special representatives, and we are waiting patiently.”

Mr. Khashoggi disappeared after entering the Saudi Consulate in Istanbul on Oct. 2; Turkish officials have said that he was murdered by a Saudi hit squad and his body destroyed. After several early denials, the Saudi authorities eventually admitted that Mr. Khashoggi was killed inside the consulate but have not revealed what was done with his body.

“It is obvious that this murder was previously planned and that the order had come from high-level authorities in Saudi Arabia,” Mr. Erdogan said, according to Posta, one of the most popular daily newspapers in Turkey. “We want the person who gave the order to be revealed.”

From the start, it has been widely believed that an operation against a high-profile dissident such as Mr. Khashoggi, a columnist for The Washington Post, could have been conducted only with the knowledge and approval of the crown prince, Saudi Arabia’s de facto leader. 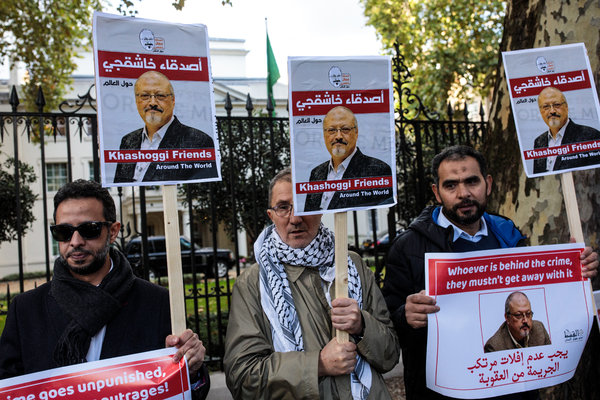 Mr. Erdogan has vowed to expose the people who ordered the killing of Mr. Khashoggi — a personal friend of Mr. Erdogan and many of his advisers — as well as those who carried it out, but he has refrained from accusing anyone by name.

On Friday, he reiterated his belief that he was sure that King Salman of Saudi Arabia was not in any way involved, so his comments represented a pointed signal that he holds the crown prince responsible for Mr. Khashoggi’s death.

Through a skillful campaign of intelligence leaks to the news media, Mr. Erdogan has engineered prominent coverage of the case around the world, and he has sought to engage Western support to curb the Saudi prince, whom he sees as a personal threat.

Prince Mohammed has described Turkey, along with Iran and extremist Islamist groups, as part of a “triangle of evil.” Mr. Erdogan has taken that comment and Saudi support for Kurdish rebels fighting the Islamic State in Syria as a direct challenge to his power.

He said Turkish intelligence had shared audio recordings of the killing with foreign intelligence services that had asked to hear them, including those from Britain, Canada, France, Germany, Saudi Arabia and the United States.

“The tape is really terrible,” Mr. Erdogan said, according to Posta. “Moreover, the Saudi intelligence officer was so shocked he said, ‘Perhaps he took heroin, only someone who took heroin can do that.’”

“Yes the man was shocked when he heard it, and this is the truth,” Mr. Erdogan said according to another daily, Yeni Safak. “Despite that, there are those who are seeking to manipulate the incident. When the crown prince telephoned me, he said: ‘Can I send my chief prosecutor,’ and I said ‘Of course, he is welcome to come.’”

After Mr. Khashoggi was assassinated, a member of the 15-person team sent to Turkey to kill him told a superior by telephone to “tell your boss,” believed to be Prince Mohammed, that the mission had been carried out, according to people familiar with a recording of the killing.

Without specifically accusing the crown prince of orchestrating the killing and the cover-up efforts, Mr. Erdogan frequently invoked his name in expressing his frustration.

“All those incidents have happened, all that information, documents, etc. are there,” Mr. Erdogan went on. “The crown prince says, ‘I am going to clarify the incident and do what is necessary.’ The crown prince tells this to my special representatives, and we are waiting patiently.”

Mr. Erdogan said he discussed the Khashoggi affair over the weekend during a dinner with President Trump, President Emmanuel Macron of France and Chancellor Angela Merkel of Germany. He said he was confident that the Western leaders were taking the case very seriously.

“I think they will place this incident in a different position as a result of information provided by their intelligence,” he said, according to Hurriyet Daily. “You know, the U.S. Congress demanded a briefing from the C.I.A. I think the perspectives will change after this briefing.”

The Saudis have taken at least 18 people into custody in connection with Mr. Khashoggi’s death — the 15 people who are believed to have flown to Turkey for the purpose of killing him at the consulate, and three more who were detained in Saudi Arabia.

Mr. Erdogan said he told Mr. Trump that “there is no need to look for the killers here and there,” Posta reported. “The murderers are among those arrested 18.”

The pro-government newspaper Sabah published several X-ray scans of the suitcases of the 15-member Saudi team who left Istanbul on two planes at 6.20 p.m. and 10.46 p.m. on the day of the killing. In addition to an array of technical equipment, including walkie-talkies, tasers and jammers, they were carrying syringes, staplers and a “sharp object that looked like a scalpel,” the newspaper reported.