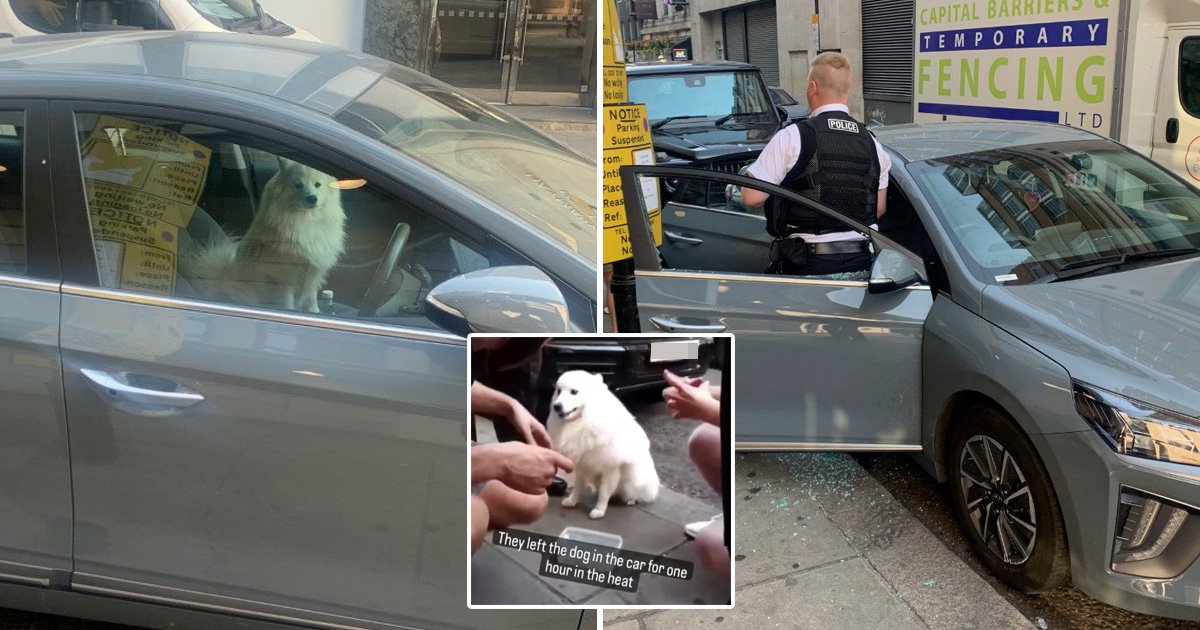 There have been numerous reports of owners leaving dogs inside cars as the country sees some of the hottest temperatures ever.

One dog was left trapped inside a £25,000 electric Hyundai in Leicester Square on Monday – the third hottest day on record in Britain.

Concerned bystanders looked over the animal for about 10 minutes before finally deciding to call police around 6.15pm.

The were given the green light to smash the window if the dog was still panting in the next five to ten minutes.

Just as they were about to go ahead, officers arrived on Oxendon Street to intervene themselves.

Batons and a hammer were used in an attempt to break the glass, but a car window breaker succeeded in the end and the pet was freed.

The dog was put in a police car with aircon before the owner arrived and apparently argued with police.

John Thompson, 35, who filmed the moment officers came to save the day, said: ‘I was just immediately scared for the dog and thought “come on, it’s the hottest day of the year”.

‘The dog was panting on the passenger seat and then moved down to where the pedals are because it was cooler at the bottom.’

He added that the owner was ‘really upset because she thought they were taking the dog’.

Police have confirmed her details were taken and the pet handed back to her.

A spokesperson for The Metropolitan Police said: ‘At 6.16pm on Monday police were alerted by a concerned member of the public to a dog inside a car with the windows closed in Oxendon Street, SW1.

‘The dog, which had allegedly been in the car for some time, appeared to be suffering in the heat.

‘Officers attended and broke a window to gain entry to the dog and the owners of the car were spoken to and their details taken.

‘The dog appeared in good health once it had been released from the car.’.

It came after another dog was trapped inside a vehicle outside The Royal Air Force Museum in Hendon in 31.5C weather.

Local police slammed the incident as ‘unbelievable’ after smashing through the window in a rescue mission yesterday.

Meanwhile, officers were also reportedly called to reports of a dog unable to escape from a black Mercedes minivan without any windows open in Battersea Park yesterday.

The RSPCA has warned dogs should never be left in hot cars, conservatories, outbuildings or caravans on a warm day.

It comes as temperatures hit 40.3°C in the UK’s hottest day ever today.