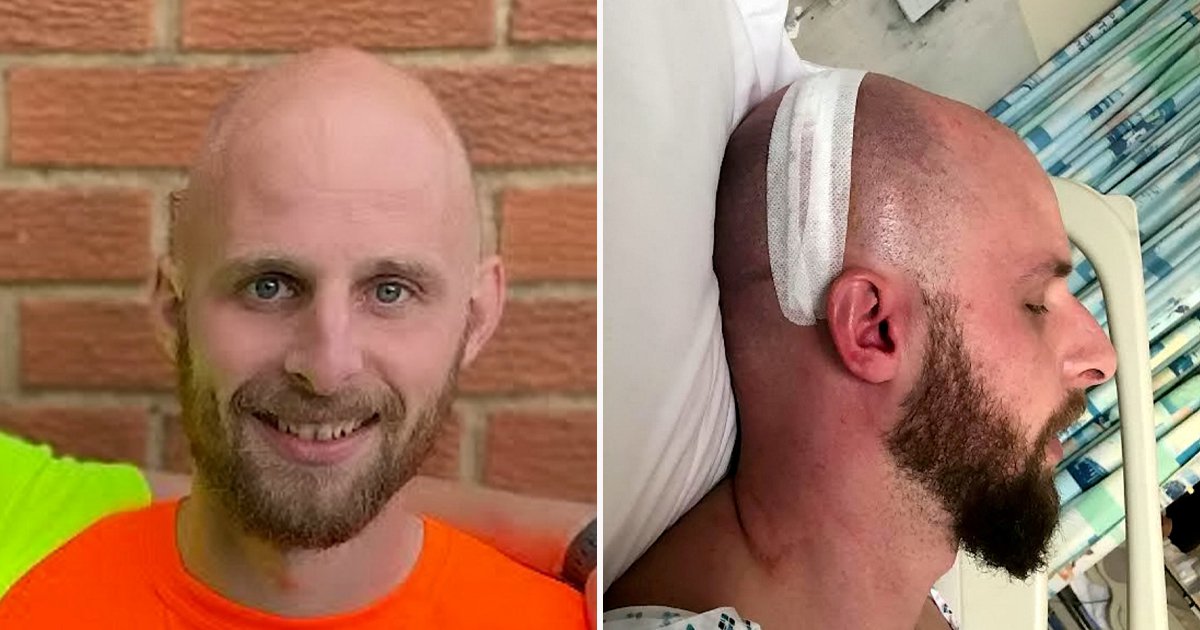 A young dad-of-two was making jokes while surgeons undertook a delicate three-hour procedure on his brain.

Shanie Antcliffe, 30, was told to stay alert and in conversation with medics so that they could make sure they did not damage his brain while removing a tumour.

The electrical engineer carried on talking while his skull was sliced open to reduce the risk of critical areas being harmed during the ‘awake craniotomy’.

Leicester fan Shanie said he teased an Arsenal-supporting surgeon who quipped back: ‘You’re a brave man saying that when I’ve got my hand inside your head’.

He was even able to look at the 5cm tumour after the operation and joked: ‘Thank god that’s out of my swede.’

He had faced several months of debilitating headaches, memory loss and tinnitus.

Shanie, from Groby, explained: ‘I was always glass half full and thought it was positive it was found in time to be operated on.

‘They first put me to sleep and they cut the side of my head to get access then cut a bone flap where they remove part of the skull to remove the tumour.

‘Once they’d done that they woke me up so I was awake for about three hours or so.

‘The idea of them waking me up was that operating can affect your brain, so it was a way of removing as much of the tumour as they could without damaging me.’

He continued: ‘They were asking me to do exercises to see if it was affecting me and would stop and wouldn’t go any deeper if it was.

‘They asked me to bare my teeth, exaggerate a smile, scrunch my face to see if there was any differences between each side of my face looking for stroke-like symptoms.

‘When they took it out of my head I said ‘thank god that’s out of my swede’ and all the surgery team laughed.

‘The surgeon was an Arsenal fan and I apologised to him for that.’

‘He said “you’re a brave man saying that when I’ve got my hand inside your head”.’

The technique is used by medics to help the procedure but also to keep patients calm – with Shanie saying that the anaesthetist, surgeon and general nurse joined in with the jokes.

He recalled the conversation ranging from football and family while the brain surgery was ongoing.

On the tumour, he added: ‘The bit I saw was this fleshy material that looked like a bloody tissue and not what I thought it would look like.

‘I couldn’t take anything in with me to the surgery, but it would’ve nice to have a pic of my own brain to see.

‘It was a surreal experience that’s for sure.’

Shanie said doctors at Leicester General Hospital had originally blamed his memory loss on migraines – leading to a 12-month delay in diagnosis.

But he is now urging others to be aware of potential signs of brain cancer and request a scan if they are experiencing them.

He branded his tumour as ‘like a ticking time bomb’ and suffered a stroke earlier in the year.

He now faces radiotherapy and chemotherapy treatment because the tumour began to return.

He added: ‘I had a few beers to celebrate my 30th birthday and had a seizure the next day while playing football with my son.

‘They took me to hospital and gave me a scan and told me the tumour had regrown slightly.

Shanie has been with his wife Jamie-Lee, 29, who works in the chemotherapy lab at the Royal Infirmary in Leicester, for 16 years.

They have two boys – Freddie, five, and Harry, three.

Shanie and two friends recently completed a running challenge to raise more than £9,000 for the Brain Tumour Charity.