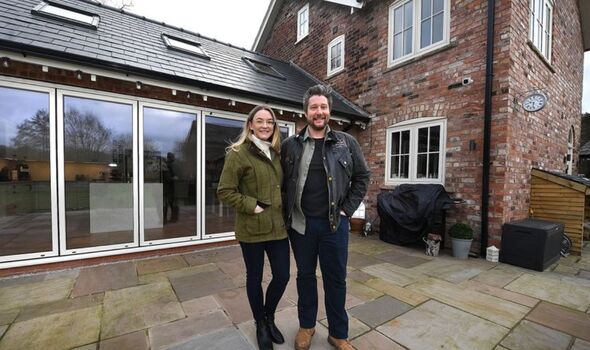 A Cheshire couple have spent years renovating a derelict farmhouse in order to finally turn it into the modern home of their dreams. Emily Hesketh, 31, and her fiancé Stacy Dyer, 41, fell for the property just outside of Knutsford, in spite of it being over their budget, not in the area they were originally looking at and needing a lot of work.

As part of Manchester Evening News’s Where I Live series each week a different homeowner from the north west will share their story of their home-buying journey, the costs involved and how they turn a house into a home.

Emily, who is originally from Lancaster, and Stacy, who is from Dorset, met in 2018 while they were both working in the US.

They originally brought a property across the pond before deciding it was time to head back to the UK and begin their search for a home.

The couple had been looking around Altrincham, Hale and Hale Barns in Greater Manchester, however they soon found themselves being priced out.

Emily, who works in sustainability, told the Manchester Evening News: “We moved back to the UK around the time that Covid first hit.

“When we came back from the US we bought a house to renovate and flipped it, and then after that we started looking for our forever home.

“We originally liked the areas of Altrincham, Hale and Hale Barns but the market was very strong and competitive.

“We were looking for a while around six months, but everything that we kept getting outbid on anywhere we wanted.”

After looking further afield they discovered a 19th century four-bedroom lakeside farmhouse just outside Knutsford, which they bought in July 2021.

Engineering consultant Stacy said: “Our search area gradually got a bit further out and we realised that for what we could afford, we would probably have to do another renovation.

“We found this house just south of Knutsford which was further out than we wanted but it had great potential. We did a drive by it and it was a pretty good location with access to the M6 and railways, and it sat right next to a lake which was super beautiful.

“It also came with planning permission for two extensions so it was pretty much ready to go in terms of being able to put our own mark on it.”

Emily said: “It was a much bigger project than the listing made it look. The bathrooms had pink and blue suites with a real kind of 70s vibe. It was all just super old, derelict and a little bit neglected.”

“Our neighbour used to own it, he bought it back in the 70s and did the work that he needed to do to make it modern back then.

“It was a full gutting and renovating job. We did two extensions, a total rewire, replaster, a new roof, new kitchen, new flooring, new carpets. Basically we just completely took the whole house back to basics and started again.”

The pair did hire a builder for the bigger projects, but after facing mounting costs they ended up doing the bulk of the work themselves.

Emily redecorated the entire house herself, with both her and her partner wanting to keep the traditional style of the place but with a “modern twist”.

The extensions and renovation took a full year to complete, with the couple’s home finally ready in August 2022.

Due to the extent of the work needed, the couple admitted that they did go over budget.

However the beautiful house by the lake is now the perfect home form Emily, Stacy and their two dogs.

They even have plans to get married at the property later this year.

Stacy continued: “It was only around Christmas when we had a lot of friends and family over that I stood and thought yeah this is exactly why we wanted this house.

“This is our forever home and we’re also planning to get married here in June 2024. We’re going to have a wedding next to the lake.”