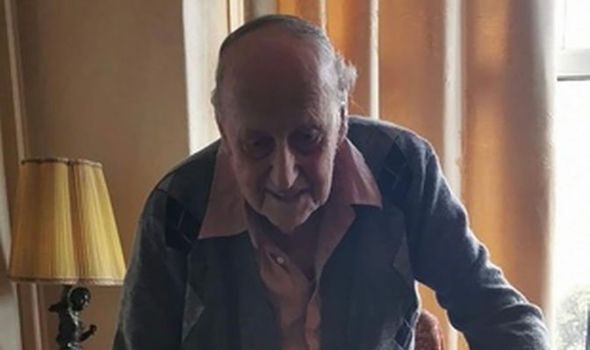 Steven Kantecki and wife Sarah fleeced 96-year-old Eric Woodhouse over a 17-month period, emptying his bank account through cash and debit card withdrawals. A court heard they splashed out £80,000 on his debit card, withdrew £90,000 from cash points and left their home brimming with the purchases at the OAP’s expense.

The heartless couple were each jailed for four years and nine months last week after a jury took just 30 minutes to convict them of theft.

Speaking after sentencing at Hull Crown Court, Eric’s granddaughter Anna Woodhouse said: “The sheer scale if it shocked and disgusted me. The police said their house was like a department store, I saw the images from their body-cam when they went in, and there was masses of stuff, they’d p***ed his life savings away on absolute c***.

“He was so frugal, that’s how he got his money. He kept a log of every penny that came in and every penny that went out, and he had all his life, he was meticulous. They tried to say he wanted to treat them, but his way of treating you was putting a £25 cheque in a card, he was modest.

“They treated him and his house like rubbish, throwing rubbish on the floor, and putting their slippers on the hearth. That was my father’s childhood home, it felt like a violation.”

Eric died just two months after the Kanteckis’ crimes were uncovered, but Hull Live reports he did live to see the bank return his savings.

The sheer scale if it shocked and disgusted me. The police said their house was like a department store

The Kanteckis bought luxury goods, including 60 watches and more than 200 bottles of perfume, with the money.

Anna and her family grew suspicious of the couple but she said Eric, of Bridlington, East Yorkshire, was “too kind” to be distrustful.

Anna, 44, is speaking out after launching a petition for a change in the law after discovering her grandfather was vulnerable due to a gap in legislation.

The pensioner didn’t like having agency carers, who would frequently change, and he didn’t ever get to know who was looking after him, so he came to a “private arrangement” with the Kanteckis, who had previous experience working in the care sector and had looked after his late wife Olga, and son, Matthew, who died in 2015, while employed with an agency.

But if they’re not employed via an agency or care home, they’re currently classed as “personal assistants” and therefore do not need to go through the Disclosure and Barring Service (DBS) and could even set up as carers again once released from prison.

“Carers do an amazing job and I am sure the majority wouldn’t dream of doing something like this. But this is the only part of the care sector that is unregulated and we need to do something to protect the vulnerable,” Anna continued.

“I received a phone call from him [Eric] one day and I could hear them coaching him in the background, saying ‘we are your family now and we are the best carers in the world’.

When the theft was uncovered, and the scale of the betrayal, Anna was it was “devastating” to the family and her grandfather.

Anna is now working with charities to highlight abuse of the elderly and hopes to “open up the conversation” about what to do if you suspect a family member is suffering it.

She added: “It’s been an absolutely horrendous time for the family, but at least now we can get this conversation started and make more people aware that this can happen.

“Most carers are wonderful people, and what this has taught me is that family, friends, the police, everyone involved showed such care and humanity, that restored my faith in humanity.”

Anna has been in touch with numerous MPs to highlight the gap in legislation and has launched a petition, which can be signed by clicking here.