Prime Minister Theresa May has vowed to bring her Brexit withdrawal agreement back to the House of Commons for the fourth time next month. Brexit Secretary Stephen Barclay has claimed if the Prime Minster’s deal is rejected again, then the “Barnier deal is dead.” He told the Lords EU Committee: “I think if the House of Commons does not approve the WAB, then the Barnier deal is dead, in that form.

“I think the House will have to then address a much more fundamental question between whether it will pursue and communicate on a no deal option. Or whether it will revoke.

“I think what has characterised the discussion on this has been an unwillingness within the House of Commons, to make a final decision between whether it is a deal, no deal, or we revoke.

“Those are the three options, the Prime Minister has said it many times.”

Mrs May will bring a Withdrawal Agreement Bill (WAB), which implements the departure terms, to parliament for a vote in the week beginning June 3 just as US President Donald Trump begins a state visit to Britain. 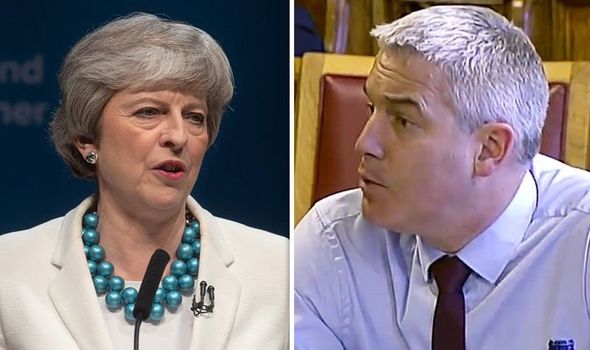 I think if the House of Commons does not approve the WAB, then the Barnier deal is dead

But, the decision to bring back the deal has been criticised by some Conservative Party Brexit supporters.

Conservative MP for Wellingborough, Peter Bone, told talkRADIO: “I have talked to colleagues, some of whom voted for it last time, and they think it is dead and they will vote against it this time.

“It seems absurd to bring it back. It is the same thing again, again and again.”

He said: “They say that her deal is worse than staying in the EU, that they want us to come out now on a no-deal basis, and third, more importantly, they’ve lost confidence in the Prime Minister and wish her to resign before the European elections.

“Prime Minister, what message do you have to say to these loyal and dedicated Conservatives?”

Mrs May thanked all party supporters for their work campaigning and fundraising, and said to those “concerned about delivering Brexit” her Government “wants to deliver Brexit and has been working to deliver Brexit”.

Mrs May added: “Sadly so far, the House of Commons has not found a majority to do that.

“If everybody in the House of Commons had voted along with the Government and the majority of Conservative members of parliament we would already have left the European Union.”

Mrs May’s spokesman declined to say on Wednesday whether May would resign if her latest bid to get support for her Brexit withdrawal deal is defeated when it comes back to parliament for a fourth time next month.