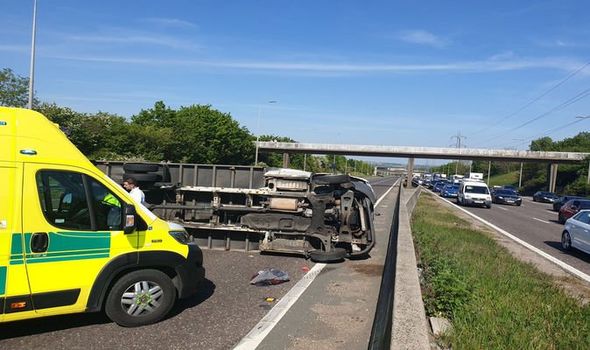 Rush hour traffic in the North of the country has been hit with major delays after a collision involving several vehicles led to a lorry overturning, blocking lanes three and four of the busy road. The crash has led to an eight-mile tailback. Highways England has confirmed the incident took place at 3.40pm after two cars collided with an HGV, causing the lorry to overturn into lanes two and three.

Emergency services are at the scene.

Highways England wrote on Twitter: “The M62 eastbound in West Yorkshire is currently experiencing severe delays of over 90 mins (1 and a half hours) due to a collision closing 3 (of 4) lanes between J24 (Huddersfield Halifax A629) and J25 (Brighouse Dewsbury A644).

“All emergency services are on scene assisting in clearing the road. There is slow traffic from J22 (Saddleworth A672).

“The delays are not helped by a broken down vehicle closing 2 lanes within J23 (Huddersfield A640).”

A West Yorkshire Police spokesman said they were called at 3.37pm by a member of the public.

There are no reports of any injuries.

Motorists are expected to add significant time to their journey as the evening rush hour begins.

Many drivers are also using the route to head to Leeds for their play-off second leg against Derby County at Elland round this evening.

As of 5.39pm Highways England has confirmed all lanes are now up and running.

It said: “#M62 eastbound Junction 24 #AinleyTop to Junction 25 #Brighouse. All lane closures have now been removed following the clearance of the vehicles involved in the collision. Traffic is now flowing normally. Thank you for your patience.”