The Tory MP for Stone warned Article 4 of the withdrawal agreement states that during the implementation period Britain without be forced to accept laws of other European Union members states for “a significant number of years”. Speaking on BBC Radio 5 Live, Sir Bill said: “They would be making these decisions behind closed doors without the transcript and it would put us at the mercy of our competitors.

“It is absolutely and completely unacceptable that the British people, the voters, should find themselves in a position where they are having legislation passed over the heads of their Parliament which will be politically castrative.”

Sir Bill outlined why the implementation period, when the UK has formally left the EU but it still set to apply EU law, could be a “complete disaster” for Britain.

He explained: “The bottom line is that if you have a Parliament, and this is the reason why it is so important, where people are voted in as Members of Parliament in general elections by the wishes of the electorate, that then forms a Government.

“And the reality is that if the legislation is not passed by your Government but it is passed by the other member states over your heads and Germany calling all the shots and making it absolutely uncompetitive for us to be able to leave the European Union, it will be a complete disaster for very big businesses who are saying that they want this so-called transitional deal will not realise how it hits them. 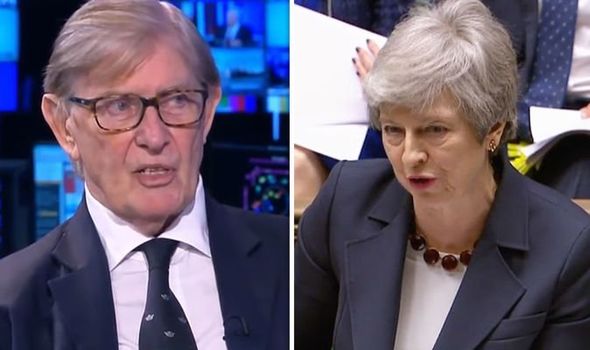 “And the legislation can be passed very quickly but some people say it will take a long time for it to go through.

“But actually that is not the case and quite often through various procedures, they can accelerate that legislation and it would put us at the mercy of our competitors.

“And a lot of businesses in this country and people should be very concerned about this.”

He asked if Prime Minister Theresa May had gone to the Attorney General for legal advice about asking the EU to extend Article 50, but said she did not answer.

Sir Bill claimed “distinguished lawyers are convinced” she had acted improperly and must make the advice public.

In response, Mrs May said: “The House of Commons voted to extend Article 50 an agreement was made with the EU.