The BBC announced it was abolishing the free TV licenses for over 75s earlier this month, with the plans taking effect from June 2020. Pensioners took to the streets of Belfast this week to protest against the BBC’s decision to enforce the annual £154.50 fee on those aged over 75.

One protester said: “We are here today because the BBC made an announcement that they are going to take away the free TV licenses for over 75s.

“The only ones who will get them will be on pension credit.

“Television is the only outlet some people have to the outside world, especially in rural areas where there is not much transport. It would be an absolute sin for them to lose their TV license.” 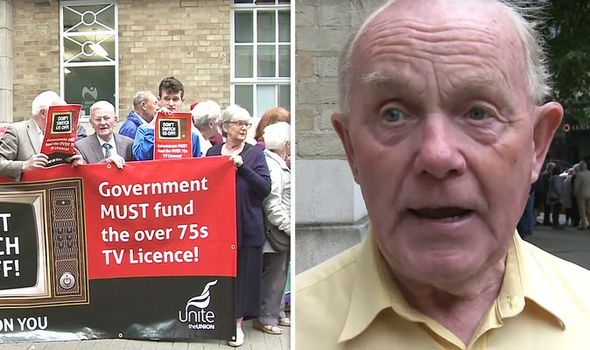 He blasted: “The Tory Government broke their election promises and are now in reverse and we want to make sure that we have a strong voice.”

The National Pensioners Convention (NPC) has launched a nationwide ‘Don’t Switch Us Off’ movement to object against the decision.

From this date, only households with someone in receipt of Pension Credit will be able to claim a free TV licence, meaning around 3.7million over-75s will be stung by the annual £154.50 fee.

The move has caused an outcry, with thousands condemning the BBC’s decision.

From June 2020 only around 1.5 million households will be eligible for a free TV licence under the new scheme.

The Government has been criticised for forcing the financial burden on to the BBC.

As part of the charter agreement which came into effect in 2017, the BBC would take on the burden of paying for free licences by June 2020.

In a statement, the BBC said: “We appreciate that people feel strongly about this issue, and recognise that many people have signed the Age UK petition calling on the government to restore funding for free TV licences.

“We know pensioner poverty is an important issue, and that’s why we’re ensuring the poorest older pensioners continue to get a free licence, while avoiding the closure of major services which would be necessary if we were to meet the £745m-a-year cost.”

More than 580,000 people have so far signed an Age UK petition against the broadcaster’s decision.

About 3.7 million pensioners are believed to be affected by the change when it comes into effect in June 2020.

Only one fee, of £154.50 for a colour licence or £52 for a black and white one, has to be paid each year and that covers the individual for any device they choose to watch programmes on.

Viewers who use television services but do not watch BBC programmes still require a TV licence as the BBC is the licensing authority with legal backing to collect the annual duty.

Installing or using a television receiver to watch or record a television programme without a TV licence is illegal under Section 363 of the Communications Act 2003.